A friend of a friend, that has never met me, drove over an hour to get me a prescription. I was in accident and got a flu at ER, when no one was being tested. Later I got a call requesting I self quarantine. But where I live you can't get anything if you can not drive around. She came to my door in mask and gloves, prescription and flowers. It's been so long since anyone gave me flowers I dont own a vase. I put them in my thermos. #gratitude #actsofkindness #weareallinthistogether❤️ I have 3 days of quarantine to go. #stayhome #staysafe #staystrong
Run Wild, Run Free. Article on @downtownmagnyc by @debmartinnyc . A fast look at history, origin and future #wildhorses. You can access the digital Spring issue of the magazine through the link in bio. #wildhorseeducation #runwild #runfree @canafoundation #fightworthfighting #wildhorsesofinstagram
Spreading #rainbowsofhope during the health crisis. For our wild horses there is a real hope that lies in the power of your voice! You can take action here, please copy and paste: https://bit.ly/2QO8UC2 #wilhorses #wildhorsesofinstagram #fightforlove
I used to make my.living as an artist before life grabbed me, and tossed me hard, into advocacy for #wildhorses and #publiclands I think it might be time to pull out the paints and #rediscover the rest of me? #windowtothesoul #weareallinthistogether❤️ #artheals
Free to watch: Many filmmakers are releasing projects free to watch online to help us all stay connected with our wild horses. Copy and paste .. A list and links. >> https://bit.ly/2J3Qc58 As projects are released we will update the page at the link above. We have been notified that several more filmmakers will be releasing shorts and full features. Big thank you to all of these creatives for their interest in wild horses and their commitment to the community of advocacy. #wildhorses #gratitude @stephanieandmadeleine @dirkjohnson @ken.fall.54
Ulysses... love this poem. Find #leadership during #covidcrisis where your heart and soul need it. This is #soulfood for me #weareallinthistogether❤️ https://youtu.be/aJb_zJbJ7FI Copy and paste to hear her read the last stanza of the epic poem... Tho' much is taken, much abides; and tho' We are not now that strength which in old days Moved earth and heaven, that which we are, we are; One equal temper of heroic hearts, Made weak by time and fate, but strong in will To strive, to seek, to find, and not to yield.
Wild Horse Education 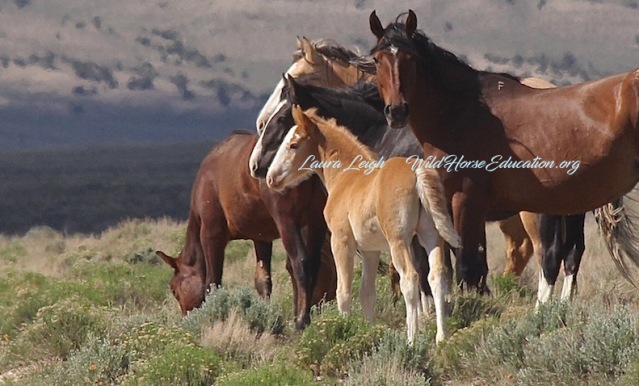 The Record of Decision on the spay experiments in Oregon was approved by the Burns District BLM. You can read the letter here: ORSPAY_Cover letter_signed

Today the debate in Congress will cover funding for spaying (currently not approved) in the fiscal 2019 budget. The House voted “yes,” the Senate voted “no.” Funding is now in committee to rectify the bills. . https://www.congress.gov/bill/115th-congress/house-bill/6147

You can find your reps here: http://Govtrack.us

I was talking with my vet during a visit. He offered the following:

Spaying for birth control in dogs is something that is done these days almost on a conveyor belt, so common and should be demanded.
But this procedure is barbaric butchery for a horse. For it to even be considered is insane! We have studies out there for birth control vaccines that should be utilized.
I wanted to tell you a true story about a conversation I had today with my vet. He came to see one of my horses for a lameness issue. We got to talking about wild horses and I mentioned how the BLM wants to  start spaying our wild horses at the roundup sites in a non sterile, dirty, dusty stocks, released with no aftercare. To me there are so many levels of cruelty and butchery, not to mention their vitals will be trough the roof after being chased, terrorized and separated from the safety of their family by a thumping helicopter (when was the last time you stood below a helicopter?).
My vet’s eye’s got real big, and he said “Oh Juley it is unethical to preform that procedure on any horse, wild or domestic. It would mean death! I would NEVER even consider doing that!’

He went on to explain how they do it and the tool they use. I won’t get into that, but he did tell me a story, but adding ‘ this is not something taught in vet school, it is left to the large animal surgical specialists in vet hospitals in treating severe medical conditions, and not for birth control…in hospital settings.. not on the range.’

He told me of a student who was performing an ovariectomies via colpotomy that resulted in death. He said someone would need to do this procedure on at least 300 horses to even have a clue what they were doing. The student was able to remove the right ovarie because its easy to find, but that the left side is harder because there are a lot of other organs on the left side that feel like an ovarie. Doing this on the range is just so insane! So when the student went in the left side, he found what he thought was the ovarie. After pulling it out, they discovered it was a little sack of manure. The poor mare soon died because he had ripped out a piece of her colon.

Please do not consider this procedure for birth control. Please keep the protections enshrined in the 1971 Wild Horse and Burro Act.

Many orgs will be protesting the spaying even if funding is approved. Please remember this “spay in field” has been done before at Sheldon. The ramifications in field are immense; mortality and behaviorally.

This is all about politics.

To learn a bit more about the current politics that have driven their tendrils deep into todays BLM,  read more here: https://www.publichorses.com/anyone-watching

WHE are out at roundups and in field. WHE is prepping protests against this move to spay and also against a mine that will obliterate habitat for one of our amazing herds.