Our wild horses must remain on the landscape to be “integral to it.” Release at Stone Cabin.

As we count down to the new year we review, regroup and prepare.

2015 was a year of intense retaliation against wild horses and against Wild Horse Education for the progress we are making. We are preparing for 2016, the year of a “Reckoning.” (fast recap of highlights from 2015 http://wildhorseeducation.org/2015/12/19/countdown-2016/)

One Herd Management Area (HMA) has become a focal point. Retaliation is happening in multiple areas but this one area, and one horse, became a “ground zero.”

In 2014 we continually caught a livestock permittee at Fish Creek in trespass. It took the Bureau of Land Management (BLM) more than 8 months to cite him. http://wildhorseeducation.org/2015/01/09/nevada-rancher-gets-bill-for-livestock-trespass-in-wild-horse-area/ (This was not the only area of trespass, nor the only bill).

Livestock grazing in Diamond. The Goicoechea ranch borders Diamond, the birthplace of the NACO suit to remove and destroy wild horses. One more push by the state and counties.

Intense political maneuvering began as Congressman Mark Amodei and Senator Dean Heller stepped in behind the local political machine in Eureka County (Commissioner JJ Goicoechea, whose father is Pete Goicoechea the state Legislator. Most wild horse advocates know this name because of the continual introduction to the legislature of a bill to deny wild horses water in the state of NV). Pressure was placed on the BLM to lower the fine. We met with Heller’s staff and begged them to recognize the lawless climate they were creating, they failed to listen. The BLM caved.

At the same time a plan was put in place (through every legal process) to collect data, use ongoing fertility control and work forward to create a sane management plan for the wild horses. (you can download a pdf in this article http://wildhorseeducation.org/2015/06/07/fish-creek-the-controversy/) This was the original intention, denoted in every document. This plan removed horses most suitable for adoption (age) and intended to use temporary fertility control in an ongoing fashion after creating a clear genetic equation of the herd. In recent publications we see the county claiming they supported the original plan, that  is a lie. One more in the litany of lies. We believe the county got information from the BLM roundup contractor and based their assertions on that, not fact, and then acted accordingly. We were there. Everything we documented points to that relationship as not only pivotal, but without any integrity. (Fish Creek came on the heels of Sheldon as well, we will add that to our “New Years fireworks” in a post  to come).

As the wild horses were going to be released to the range the insanity hit a fever pitch. The contractor trailers were not present to transport horses. Blatant favoritism was given to the corrals by the BLM contractor to ranching media after outright harassment to other members of public during operations (keep in ming the Comprehensive Animal Welfare team was onsite for a couple of  days finalizing accountability measures, the direct result of litigation by Wild Horse Education founder, Laura Leigh. The contractors do not like CAWP). The trespass rancher and a dozen others showed up and told BLM, “You are not releasing horses.”

Keep in mind there was no Temporary Restraining Order (TRO), there was no “Stay” granted in any form. There was no official serving of any court documents in any way. The release should have taken place. 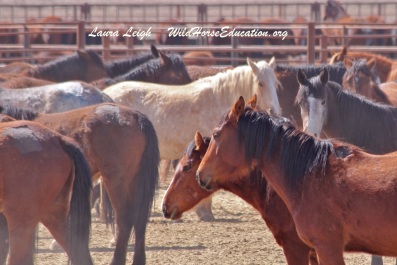 Fish Creek mares at the “off limits” Broken Arrow facility. The palomino mare gave birth here. Her foal has been taken from her and he will likely never go home as BLM caved to livestock interests.

Instead the BLM continued to operate in fear. They caved to the livestock interests (there was real fear that the horses, once released, would be a target. There was real fear of political ramifications). The horses were transported to holding and the insanity of the counties legal challenge was finally served.

Keep in mind the legal challenge by the county is fraught with fallacy. The fertility control proposed is safe/effective, the data plan is sound and all mandates of law were met. The county is angry that the federal government did not do things the way they wanted. What do they ask for? For wild horses to be removed and even destroyed or sold to slaughter. They want to control everything that happens, even to the extent of controlling the “public” that is allowed to lawfully participate in process.

Wild horses were returned to the range, but not all of the ones slated for release. Fifteen mares and their babies went to Broken Arrow. Without any notification, process or discussion those mares have now been branded, foals weaned and mixed with the general population behind the closed door of Broken Arrow, likely never to be returned.

The horses that did go back? They were targeted. Video taping themselves violating multiple codes of federal regulations the permittee (that had been removed by the court for having no right to file) and the proslaughter group Protect the Harvest, began a social media campaign of drama, bellyaching and falsehood. The county and rancher media stood in support of the intentional inflammatory inciting of the public. The penalty for these actions is clearly outlined in regulation; fines, prison time and the loss of the right to graze on public land. (Remember that stupidity is not a legal defense). It is also good to note that “inciting” others into actions that break the law is also a crime.

BLM once again caved to the political intimidation. Will BLM ever act as the regulatory agency it is supposed to be? Or will we continue to see the entrenchment of fear? Will BLM move fast to try to clear “bad press” and opt to simply surgically sterilize horses broad scale or remove them to satisfy corruption? Will BLM ever find a backbone?

Doubtful if what we saw on a “tour” of Fish Creek is any indication of what is coming. http://wildhorseeducation.org/2015/08/19/human-safety-placed-in-jeopardy-take-action/

Doubtful if the investigation into the Tom Davis scandal confirms everything uncovered (WHE assisted in that investigation that began in 2012) yet leads to absolutely no accountability to the law. http://wildhorseeducation.org/2015/10/25/an-honest-conversation/

“Sarge.” He has one heck of a story to tell.

Nothing represents this increasing confrontation between the state and federal government like the horse named “Sarge.” We urge you to read this article: http://bit.ly/1HCJsl9

Fish Creek is the ONLY HMA in the entire West that has created an actual documented genetic baseline to determine effectiveness of fertility control as it is used to preserve the herd based on an actual equation of “what the herd is.” A science based plan is on hold because of the very sad reality that politics rule management, not the range or the law.

At WHE we have documented many things. We document horses and the range, yet we also document so much more.

We are beginning a push for accountability at Fish Creek but also in the broader picture. Our documentation of trespass goes far beyond Fish Creek. Trespass is a widespread problem that has never been addressed with any accountable actions. Trespass can be weeks, months or years and go unrecorded or simply without consequence. It creates a lawless environment with extreme consequence to the environment, multiple species and any human life that cares about any interest besides “cows.”

Any wild horse advocate that shares the “Bundy debacle” as if that is what is happening to wild horses should simply hang their head in shame. The BLM failed. It was up to environmental interests to push for accountability. They did, through every lawful process available. Environmental interests pushed the federal government to do their job and the feds failed to stand up to the bully of public land, livestock and the state. The permittee? He’s running cows. The environmentalist? Ran for his life. 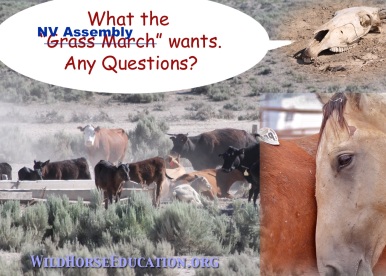 “Grass March,” Bundy Bunch or the NV State Legislature. They all sing the same song.

Our “Christmas Card” was a litany of documents, photographs, audio and video recordings.

Our “holiday list” included media outlets and representatives of Congress.

Our “holiday party” was an interview with an investigative branch of Congress.

Our “gift to you” went off to Congress, by their invitation. We thank you for making that possible.

Until the public, and certain individuals in the BLM, truly understand that the BLM is simply a regulatory agency and has a job to do that includes fair and equitable practices AND protection of the environment and citizens… they fail. That job falls on us.

We stand at a time in history where everyone needs to reach deep. Deep into their hearts, minds and souls. If we do not push hard now for accountability it will not happen, possibly ever. As wild horse and burro advocates, an interest that barely is a blip on the actual participation in process, we will see an end to any concept of true preservation of our herds.

Together we can make 2016 a year of Reckoning.

note: We worked with the Center for Investigative Reporting since the spring on an article published in Reveal (and picked up by multiple outlets). We have also spoken to Dateline. More coming in 2016.

We have noted that a lot of people are actually reading this article. As we know our audience includes advocates, but also the counties and federal government, we are adding another notation: It is NOT the job of WHE to smooth over your broken “relationships.” YOU failed, we did not. WHE is not an organization looking for an invitation to a social club, ask any advocate. WHE works, on the ground. When you are ready to “get it done” call us with real action, not more talk. Once again we have reached that juncture, one we have reached on many subjects in the past.  Until then? We will continue to look for an entity that has the understanding of the word “accountability.”