The following article published in 2018. It is a relevant editorial today, 2020.

Through Friday May 8 (2020) we have been offered a match to help build our war chest. Every contribution will be matched up to $5,000. The match is designated as funding for the fight against abusive practices. Can you help us make the match and meet the challenge ahead?

If you are shopping online you can help Wild Horse Education by choosing us as your charity of choice on IGive or Amazonsmile.com

November 2016, a moment we leapt backwards a decade. Photo taken, on my camera, by a federal employee of me attempting to see captured wild horses. The game of “access” begins again.

Today marks a day on the calendar where the world remembers the importance of media, a free press. My relationship over the years of advocacy with many members of the media, is much like my relationship with advocacy; there are those trying to create a truth and those simply trying to to create “click bait.” (article from 2016:  https://wildhorseeducation.org/2016/03/14/todays-media-and-wild-horses-entertainment-or-information/)

I have mixed feelings about a day that celebrates the importance of fearless journalism. Over the last decade I have seen so many “journalists” just copy/paste a press release and never fact check what they publish over the last decade.

No big government bailout for the news media, adapt or die. So many news outlets have struggling as they have been forced to enter the digital world and compete with “social influencers with boob jobs” for clicks that might keep them in business. Many more just went out of business.

I understand “why” and it breaks something in me that has always admired and strived to be a part of that the “truth teller society” once represented by a newspaper.

I came to the West with a background in media; journalism, animation, illustration. My background is a bit eclectic, but the immediate world I had come from gave me skills, and intention, to “tell the story of the horse.” It was, and is, not an easy story to tell. Like any tale you have the surface, subsurface and deep benthic layers. 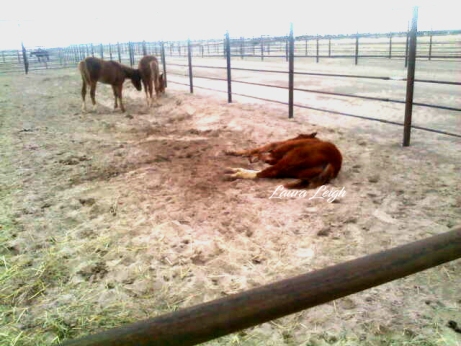 Colt, “Hope,” whose feet are literally falling off (hoof slough) who died after a roundup.

What I saw at the surface was so egregious I became an advocate.

Following a path best described as “advocate/journalist;” document and report, but then engage whatever process that reporting pointed a need to engage. I’ve found myself following leads, investigating them, documenting them, creating reports, talking to members of Congress and oversight, federal land managers, and to federal Judges through litigation.

In 2010 I filed two cases that used a First Amendment point; reporting on hands on activity was difficult.  The first was filed at Owyhee and included issues of inhumane planning and execution of those plans. Each case is a learning opportunity; I learned to separate those issues and the next cases brought them in distinct actions.

To tell you the details of the experience would be to write a novel (it is in progress but the work itself, for the wild horses, is always urgent and takes precedent).

The first case stopped the closure of public lands and the second case created daily observation (for what it is) at federal roundup operations and was the basis to open closed private facilities to tours. The second case took two trips federal district court and two to the Ninth Circuit court. The rulings in the second case are used in civil rights litigation nationwide.

Last year, right before #WorldPressFreedomDay, Ninth Circuit Court Judge Noonan passed away. He sat on the panel that heard my case on wild horses. I wrote a long article about what the ruling, and his death, sparked in my fingers as they hit my keyboard. https://wildhorseeducation.org/2017/04/27/a-conversation-of-law-and-a-memorial/

In my journey as an advocate/journalist those two rulings mark discoveries about the “truth of the horse” in more ways than the wins I have had against unjustified removals and against inhumane treatment. The reactions of the human individuals, regardless of what side of the fence they sat on, to rulings that began a legal frame for a discussion based on transparency and exposing a reality, have taught me more about the world our wild ones live in than any other experience on this million mile trek. 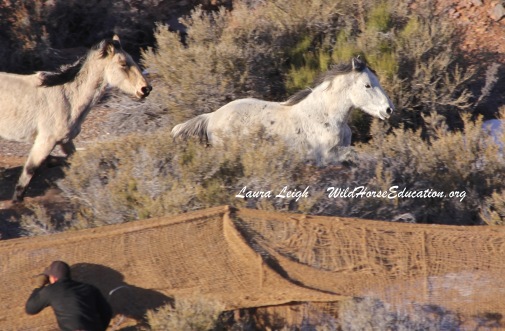 The moment of capture speaks volumes about the range, the run to the trap and the people doing the work.

Both of those cases were pivotal to the understanding I carry today. The second case lasted 5 years of my life and reads like a weird biography that stands taller than my mid-thigh when each piece of paper is stacked on on top of the other. Those that understood the commitment the intention held and those that only saw it as an opportunity to try to get their name associated with it, just for one second, to exploit it.

The work involved in that case (hundreds of thousands of road miles, tens of thousands of wild horses, writing litigation, navigating all politics) has made me who I am today and created the basis of the work of this organization.

Today here at WHE we celebrate both #WorldPressFreedomDay and our birthday. We renew our commitment to our style of advocacy; the truth of the “story” and then engage. Humane and sustainable management of our wild horses, and preservation of the land they stand, is possible. But it is only possible when politics, all sides, is opened and drained like an abscess and the truth of the world our wild horses stand on becomes a priority.

All of us should make a commitment to examine everything we see, hear and read. A world where the phrase “alt truth” is not simply called a lie, is obscene.

An educated advocacy is the only chance we have to remove those responsible for manipulation of lies for personal agenda and creating a better world. If we can, that world may yet include herds of wild horses on healthy public land.

This video was sent to me before a court hearing… after I had been chased around the dessert and threatened with arrest trying to see captured wild horses, with a court order in my hand. The laughter helped quell the nervousness. (adult language alert)

Back to the Ninth: https://wildhorseeducation.org/2013/09/06/on-file-back-to-the-ninth-circuit/

This video is part of the first case. This is after the court ruled BLM could not close public land and had to make every effort to accommodate observation (video above was sent to the next hearing on that case). I have a concussion, drove all night with the court order in hand… and met with this. The second case, the five year case, saw nearly 500,000 miles travelled, mostly alone. The second case First Amendment case lasted 5 years. (This second video was added by reader request)

Through Friday May 8 (2020) we have been offered a match to help build our war chest. Every contribution will be matched up to $5,000. The match is designated as funding for the fight against abusive practices. Can you help us make the match and meet the challenge ahead?

If you are shopping online you can help Wild Horse Education by choosing us as your charity of choice on IGive or Amazonsmile.com