The Land They Stand On

Today Wild Horse Education joined 170 environmental groups to urge the Senate to reject Zinke as Secretary of Interior. The movement was spearheaded by the Center for Biological Diversity. The letter was signed on by WHE, and many long time environmental colleagues, as we fight to protect our wild horses and the land they stand on. (read letter here cbd-zinke-opposition-letter-sign-on-v2_final-2-6-2017)

“Unity is crucial for all of us that share a love of wild places and wild things. We stand unified in deep concern and commitment to continued action.” Laura Leigh, Wild Horse Education

People say “be careful you don’t get political you could offend someone.” Yet no one flinches when we say “Politics rule the reality of the range. The reality of the range does not rule politics.” Politics as an advocate are unavoidable. If you engage process you must care about the landscape of politics as much as you care if a wild horse is hit with a helicopter at a roundup. Time is running out for our wild places.

Zinke is also pro-horse slaughter and killing mustangs in holding. 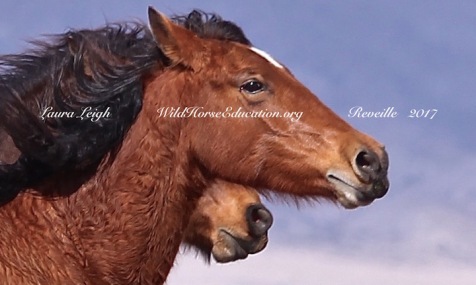 Older mare being released back onto the range. A range where her herd teeters on the edge of genetic disaster. Our wild horses are given the leftovers on public land, soon there could be no public land or no leftovers. It’s time to WAKE UP.

The National Cattlemen’s Beef Association (NCBA) and the Public Lands Council (PLC) today hailed U.S. House passage of a resolution that would repeal the Bureau of Land Management’s (BLM’s) Planning 2.0 Rule, calling it a “huge victory” for America’s ranchers. If the U.S. Senate also quickly passes the resolution, it would go to the White House for President Trump’s signature. READ MORE http://kticradio.com/agricultural/a-huge-victory-cattlemen-hail-u-s-house-passage-of-resolution-to-repeal-blms-planning-2-0-rule/

(If you do not understand the gravity of this and want to know, scroll to the bottom of the page and join our webinar tomorrow night)

Wild horses are extremely unique in the words we humans have chosen to reflect our observation of one of the most historically significant animals to the history of our nation.

That Congress finds and declares that wild free-roaming horses and burros are living symbols of the historic and pioneer spirit of the West; that they contribute to the diversity of life forms within the Nation and enrich the lives of the American people; and that these horses and burros are fast disappearing from the American scene. It is the policy of Congress that wild free-roaming horses and burros shall be protected from capture, branding, harassment, or death; and to accomplish this they are to be considered in the area where presently found, as an integral part of the natural system of the public lands. (Wild Free Roaming Horses and Burros Act, 1971)

This preface to the law that protects our wild horses is a powerful intention. If you read the language it not only covers an expectation of humane handling and thoughtfulness of management but it also ties the preservation of species to the land. Wild horses are a resource under law, like the grass and minerals, not a permitted use like mining or livestock. Wild horses are to be preserved and protected.

In truth wild horses have never really been managed as a protected resource, but more like a harvested domestic livestock with the science often reflecting a cowboy mythology (this is not a controversial statement if you R-E-A-D the National Academy of Sciences Review of June 2013 that appears to have been discarded under sage grouse with only a few minor recommendations cherry picked from the 400 page report).

Wild horse herds are literally a living history of the land they stand on. We have written multiple times about how each herd is influenced by both the geography and the human inhabitants. Our wild ones speak to our western landscape like no other beating heart on the range. Truly a living western history text is written in every genetic marker. It is why we work so hard on a case-by-case and site-by-site basis.

However the building blocks to create the intention of the Act exists, yet are often overlooked. We can preserve the wild horses, our living history, and the land they stand on.

Yet today those blocks are increasingly under threat.

This political climate is extremely dangerous. If you advocate for wild horses you must understand the massing threats that stand at the gateway to the end of our wild ones as we know them and the land they stand on.

Myron Ebell, who has returned to his role at the anti-regulation thinktank the Competitive Enterprise Institute, said on Monday: “The environmental movement is, in my view, the greatest threat to freedom and prosperity in the modern world.” (Ebel led the new President’s EPA transition team. You don’t have to agree or disagree as to “why” but if you advocate for wild horses you MUST recognize this risk) READ more at the Guardian https://www.theguardian.com/environment/2017/jan/30/green-movement-greatest-threat-freedom-says-trump-adviser-myron-ebell

The U.S. Department of Agriculture (USDA) today removed public access to tens of thousands of reports that document the numbers of animals kept by research labs, companies, zoos, circuses, and animal transporters—and whether those animals are being treated humanely under the Animal Welfare Act. Henceforth, those wanting access to the information will need to file a Freedom of Information Act request. The same goes for inspection reports under the Horse Protection Act, which prohibits injuring horses’ hooves or legs for show. (two issues here are disturbing; public access is blocked to information critical to informed choices and that the basic welfare of animals that has taken decades to have recognized as important takes a back seat to those that make a profit off of neglect and abusive practices. As a WHE reader and supporter you know both public access and the welfare of our wild horses are central to everything WHE does. We have been integral in the fight to build both access to our wild ones and the first humane handling policy since the 1971 Act was passed). READ MORE in Science http://www.sciencemag.org/news/2017/02/trump-administration-blacks-out-animal-welfare-information

The entities pushing much of this legislation have ties to a long history of fighting against animal welfare, environmental organizations and for things like horse slaughter.

Brian Klippenstein, the director of Protect the Harvest (the anti anything animal welfare nonprofit and employer of Dave Duquette, a front man for the horse slaughter industry for a decade) is leading the transition team at the USDA.

Counties and states that want control of federal resources (they don’t manage them, they sell them off into private hands) are making multiple pushes to move federal land into profit driven hands. We wrote about that legislation passing through the House already.

If you have not read https://wildhorseeducation.org/2017/01/16/post-truth-blm-rearranging-the-chairs-on-the-titanic/ and want to begin to understand the political environment, all sides, in which our horses are trapped, please take the time and click that link.

We hope you take the time to understand wild horses are connected to the land. We must protect the ground they stand on.

WHE will be hosting another webinar for people that want to learn about the political field and the implications to wild horses in more depth.

The next session will be this Thursday at 6 PM Pacific time. (We were asked to do one later in the day on a weekday).

WE are also offering a webinar this Friday at 6 pm. To learn about how to participate Friday, click here: https://wildhorseeducation.org/2017/02/07/wild-horses-and-the-fight-for-humane-handling/ (webinar will be rebroadcast due to interest, stay tuned for dates)

You will receive an email to confirm your spot for Thursday or Friday. So if your schedule changes, you can too!

Webinars will be rebroadcasted. Dates to be announced soon!