GOP Lawmakers Are Nothing But Hypocrites 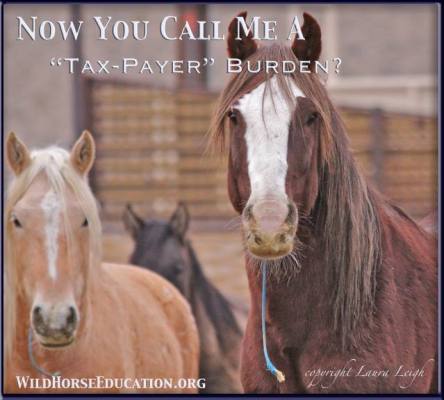 Wild horses removed from ranges overstocked by domestic livestock are now “the burden” according to the twisted logic of some politicians. Wild horses are not the problem.

A news article that appeared in several publications citing a letter from certain GOP Representatives to Bureau of Land Management (BLM) Director Neil Kornze about the wild horse and burro program is causing quite a stir. The letter essentially parrots an element of the “states rights” agenda that is pushing for state control of federal land and resource. Agenda items include removing public land managers that they deem abusive (anyone that restricts livestock), removing the raven from the migratory bird treaty (so they can kill them) and the resumption of “mustanging” to “control” wild horse populations (the resumption of sale without limitation or to slaughter). This letter focuses on calling out the BLM program with the word “overstocked” repeated, yet only in context of a narrow interpretation of law. (link to letter: http://m.reviewjournal.com/news/nevada/gop-lawmakers-call-new-approach-wild-horse-overpopulation)

The letter couches itself as a logical inquiry to a broken program. As usual the perspective is that wild horses are the ones destroying our range as they reproduce out of control.

In 2013 the National Academy of Sciences (NAS) released a scathing report that essentially fails the BLM on any scientific data to support decision making for management of a wild horse population on public land. At no time has any real baseline been created on genetic make-up of individual wild horse herds and the resources required to sustain each population in a state that maintains a population capable of reproducing itself in a healthy environment. In essence any monitoring done to set any management level of wild horses or boundary lines for Herd Management Areas (HMAs) is inaccurate.

In essence any management decision signed since the NAS report was published may comply with a land use plan, but it simply is not based on the science.

Our rangelands are overstocked, but not with wild horses. Wild horses occupy less than 11% of public land. Even at three and four times “AML” they often do not consume the usual 16% of forage actually allowed to them. “AML” is a term that means “Appropriate Management Level.” The term is simply not based on an actual use equation of forage required to sustain any uniquely defined genetic viability (site by site). Nothing but anecdotal justification exists, nothing.

Many interpreted law incorrectly. AML is simply not a “catch all” that determines a roundup. BLM has full authority to manage over AML. The wild horse and burro program is full of “discretion” that most often is used to remove wild horses, not actually manage them on the range.

Our rangelands are overstocked by domestic livestock. Our public lands grazing program began on sick land. Our ranges were seriously overstocked, and are seriously overstocked, by domestic livestock. Domestic livestock graze on 66% of public land and use more than 80% of forage. In addition they are destroying water quality and the ability of the range to recover annually by destroying the integrity of the soil itself. Public land ranching operates at a loss to the tax payer of over 1 billion dollars over the last decade (Center For Biological Diversity) and is the single most destructive surface use of public land.

The names on the GOP letter include those that support counties and individuals that actually are obstructing BLM from  implementing active fertility control objectives. The largest fertility control plan in the nation is on hold at Fish Creek in the heart of the state of Nevada. The plan was created based on the NAS report and all preparations were made to implement. The county and ranchers are impeding it even though the courts ruled BLM has authority to carry out the plan. The BLM is receiving political pressure to keep the plan on hold to placate local ranching interests.

The political players want to paint BLM management as a failure while they themselves are creating the obstacles to management.

If the intention of the letter from the GOP is appropriate management of public resource the letter is suspiciously narrow in scope. Wild horses, even in an “over AML” state, represent an interest that uses a tiny fraction of the resource.

The BLM is an agency over burdened by livestock permittees to the extent that Congressional riders are included in appropriations bills to allow livestock turnout without range monitoring because BLM lacks funding and personnel. America most of your public land has cows on ranges that are barely monitored.

The individuals listed on the GOP letter need to stop impeding accountable actions to our public resources as a whole. If a public land rancher is in willful trespass, stop interfering with BLM carrying out policy. If a rancher fails to pay his grazing fees and continues to turn out, stop providing support for unlawful actions and demand accountability.

“By demanding accountability to a tortuous interpretation of law that simply scapegoats a fractional use while encouraging a lack of accountability to the greatest use, these members of Congress are no more than hypocrites.” ~ Laura Leigh, founder of Wild Horse Education.

Note: We work very hard to try to bring some sanity into creating actual use equations based on the limitations of financial and physical resources into the conversation of wild horse management on our public land. If BLM does not stop managing the range based on political pressure we will never see healthy ranges and sustainable multiple use. The more BLM sets up any reasonable effort to engage sane wild horse management for failure, and continues to cater to these hypocritical political policies, the greater the conflicts will become and the further away we move from appropriate action.

WHE has written a series of articles that you should read to understand current practices that continue to have our public lands managed not for the reality of the range, but to satisfy political landscapes.

Sarge, a poster child for everything wrong http://wildhorseeducation.org/2015/11/04/sarge-a-poster-child-for-everything-wrong-range-management-a-layer-of-bricks-part-two/