Photo taken at temporary holding on the last day of Beaty Butte operation. Funding to take the trip provided by Return to Freedom.

“The eyes are the mirror of the soul and reflect everything that seems to be hidden; and like a mirror, they also reflect the person looking into them.”
― Paulo Coelho, Manuscript Found in Accra

Every roundup I have observed has a different tone every day. At Triple B it was a race to accountability (we won the first court order against inappropriate conduct there). Owyhee has been a battle of endurance from the desert chases in 2010 denying access (as I held a court order allowing it) to the hypothermia I faced in November of 2012 dealing with cold, wind and snow (gained court orders against inappropriate conduct there too).

But Beaty has simply solidified the “race against a storm” I now sense. I see it in the eyes.

I have seen fear and pain before. What I sense is even more menacing.

In conversation with public affairs at Beaty I was told that an agreement with Oregon State University is in discussion to surgically sterilize mares at Beaty. There was interest in the data based PZP plans I am advocating for (temporary until more data is collected as we must answer the NAS report that clearly fails the BLM program). However the interest was offset by a feeling that what I am discussing is “too much work” because retreating is required for effectiveness and the land is just so “big.”

The eyes. The eyes of the people as they tried to dance around what was actually happening. Believing I was believing them even as all I saw was nervous guilt. Somedays the fear of what my camera might capture is a palpable thing, no matter how “easy going” I am.

The eyes. The eyes of the horses trying to understand what was happening. Searching the panels for breaks to escape and the horizon for hope. Trying to search over panels for family members as they vocalize to locate each other.

This fourth year of drought, coupled with increasing political tension, has eyes searching for someone to blame. A place to land the blame for over a century of mismanaging our public land and allowing cloven hooves the lions share as they devour our landscape for profit.

I feel the eyes land once again on our wild horses. As humans look for a quick fix I see them settle on our wild ones, while they hold a surgical blade in their hands. 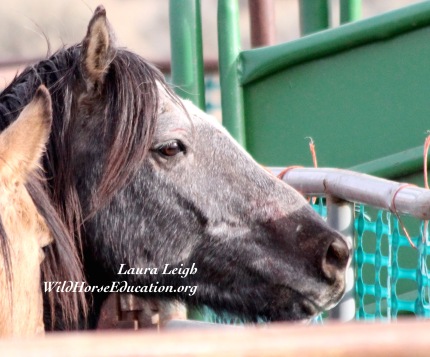 Very tall stallion captured 11/22. Searching horizon after trying to get his head over a panel to see youngster, hidden from my view. His vocalizations were insistent and deep.

The Beaty Butte Roundup has concluded with 1070 as the final total. At this time any fertility control treatment has not been decided on (original target was 1500 wild horse captured with a small turnout of about 50 treated mares planned).

Observations on the last day were limited. BLM personnel exceeded the speed limit to travel to trap location. Meeting at the office at 5 am I informed them that I was unfamiliar with roads and would be doing speed limit. Instead of playing a “cat and mouse chase” I knew if I went to temporary holding the ranger would get an immediate call on his radio that I was there without escort. Within 10 minutes of my reaching temporary, both public affairs and a ranger were present.

I was informed that the horses were “scattered” and that trap location was going to change. I documented the early morning loads heading to short term holding and told them to inform me when we could leave for the new trap location.

I sat in my vehicle and worked on legal response documents in a grazing dispute and editing video of the morning load to short term for about two hours.

I inquired if there had been any communication. I was told “no, but we will check.” I was simply informed that horses were “scattered” and that as far as public affairs knew we were still waiting to hear if trap was moving.

During conversation with public affairs it was mentioned that an agreement with Oregon Sate was in process to “tubal ligate” mares in this area. It was my impression that using the temporary PZP was troublesome in that it required reapplication. I got the distinct impression that no release of any treated mares would occur.

On the horizon I saw dust and glassed the location. I saw a gooseneck coming in.Two trailers arrived at temporary. 14 horses were offloaded and processed.

I was informed that a colt needed to be euthanized for a “failure to thrive” and was advised “no pictures.”

I told public affairs no colt offloaded that showed that condition. I was then informed it had arrived “before.”

I was led to corrals where I was able to see only the stud side of the pens. I documented the second trailer load processed from this location. 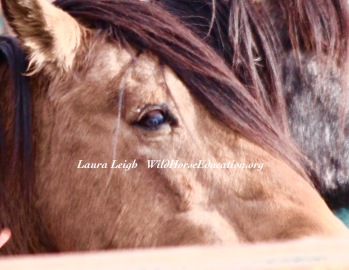 The eyes… a mirror to the soul

The wild horse and burro specialist and contractor representative came to my location. I was told 14 were gathered “today.” I was informed that they had to euthanize the foal and was asked to leave so they could “deal with it.”

Mindful of the obvious distress caused by having to complete such a task I asked if operations were complete and that no more horses would be arriving. I asked this question multiple times. Each time the answer was “we are done, it’s over.”

I am never a disturbance during operations and am pliable and understanding. So I left following my “escort” that had “lost me” earlier in the day.

On my way out of the range I saw another contractor vehicle with a trailer. The trailer had horses in it. I was told operations had ended, emphatically. The trailer was not an “open stock” and I assumed the horses were the “Judas” and saddle horses belonging to the contractor.

On review of the daily report another 7 horses arrived after I was told “no more horses.” In addition the report notes two horses euthanized while I was present. Both of the horses euthanized yesterday were noted as “4 month old colts.” As I saw no colt offloaded while I was there with a “preexisting broken rib and spinal injury,” I can only be left with the assumption that it was on the trailer no one wanted me to see.

This type of activity, lack of disclosure, is becoming less common at most BLM roundups. However it has been my experience that Oregon in particular is a bit “behind the curve” on transparency and observation.

It should also be noted that at no time did the trap move that day.

Picture taken on last day at temporary of area used as a trap wing at the beginning of operations.

Another observation at temporary holding, that was used as the trap location for the first two days, is that the wings of the trap were busted and old barbed wire fencing. As the current version of the Comprehensive Animal Welfare Policy (CAWP) has not been made available we are unclear whether this is a violation. We do know that according to a court order gained by WildHorseEducation.org (myself) at the Owyhee Complex Roundup federal district court Judge Miranda Du ruled such conduct as inappropriate. We had been assured that we would no longer see barbed wire used as part of the funnel and that if horses were to be run anywhere near it that it would be appropriately flagged. We will follow up.

Horse trying to break through on the second day of operations. Broken barbed wire fencing beneath the jute wing.

11/5/15: One albino weanling filly was blind in both eyes and was euthanized.

Please note that BLM and contractor have repeatedly made assertions that white horses are blind or can not see right. At the Silver Kind Roundup in 2010 we rescued a white stallion with pale blue eyes that we feared they would euthanize. “Silver King” resides at Return to Freedom and certainly is not blind.

They told me of the “albinos” that they said were “blind.” I said I would take two. They told me they had already been euthanized.

Silver King and Galahad immediately after arriving from BLM holding, on their way to sanctuary.

Wild Horse Education is actively working “boots on the ground” and needs your support. We are engaged in addressing multiple avenues to gan accountability and integrity join process. We are working on solutions for on range management that addresses all requirements of the law. Please help us bring real change. 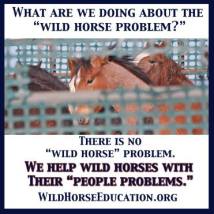