Background; As the Owyhee Roundup Begins 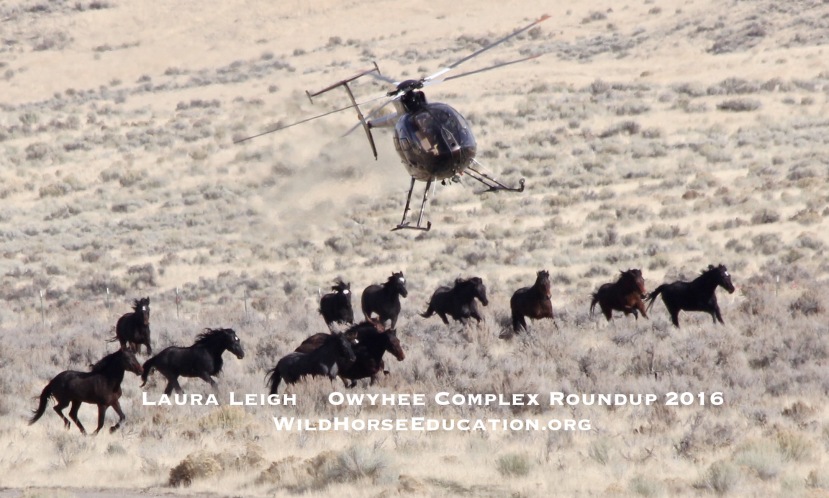 BLM will begin the Owyhee roundup today. At the last minute BLM changed the schedule and operations begin. 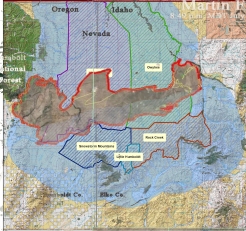 Red is approximate outline of the area of the burn

The target for his operation are 1200 wild horses that are left in the area of the Martin Fire that raged this past summer. The Martin fire burned nearly 440,000 acres of wild horse habitat in the massive Owyhee Complex.

The map above shows the area that BLM considers it’s “operation zone” when it creates removals of wild horses from the complex. The blue area to the left is the area that was under dispute in the Tri-Agency agreement with BLM and Forest Service and the McDermitt tribes (many of our readers will remember our reports shut down a repeat , in 2015, of the 2013 slaughter auction fiasco of 2013). The horses in blue are federally protected, not tribal to be sent back to the kill auction.

This fire represents the largest loss of wild horse habitat by fire since the passage of the Act. This fire was not a natural event and has been determined to have been “human caused.” The area burned is more than ten times the size of the entire Pryor Mountain wild horse range in Montana and twice the size of the entire Sand Wash Basin HMA in Colorado. The burned area is larger than the entire Virginia Range (state horses of Nevada).

This fire was fueled by a grass load that ranged from 200-1000 times normal. This fire moved extremely fast and flames reported at over 45 ft tall. Very heavy fuel loads (grasses, this is not a “forest fire”), fed a fire that was “faster than a horse” according to a quote in the Reno Gazette Journal.

This particular operation is due to fire. There will be reseeding etc for livestock and mining. This fire also  impacted people and private property loss. BLM is still required to manage wild horses humanely on and off range. A plan besides removal would be appropriate humane management.

This needs to move slowly and carefully, not like what we are seeing recently.  (scroll down page for past and present)

However, WHE did reach out to BLM during and after the fire to help create a plan that was not just “remove the horses.” To date the only real response was the announcement of this operation.

In 2016 WHE was back at another winter roundup where 1,832 wild horses were captured. This operation was to “protect sage grouse,” (many of you know how we feel about the entire conversation of sage grouse; politics have taken it over, not reality). The focal point of this operation, protection of habitat, has now burned.

To view the 2016 operation we had to bring in “legal team” to address access issues once more.

This article was written as background for the public and media interested in this operation and interested in how BLM manages wild horses on range and during capture. Scroll down for video, images and more info.

video from 2012. An order from the court forbid BLM to run foals until they could not keep up or through barbed wire. This suit was brought after BLM claimed to implement a welfare policy but had not included it in contracts. In Oct 2015 BLM included CAWP into operating procedures and contracts. We dropped our suit pending the effectiveness of BLM to follow policy during settlement (court ordered on First Amendment issues). The case was dropped in a fashion that did not make it disappear… it can be revived. What a lot of people do not know is that litigation must be made area by area, not issue by issue. We are working to change that.

It has become painfully obvious that BLM is not following protocol.

Just some of WHE Background:

Editorial from 2012 including the time period between 2010-2012 and the threats of arrest simply trying to see horses in holding, after a court orders it. https://wildhorseeducation.org/2012/11/26/almost-200000-miles-ago-owyhee-then-and-now/