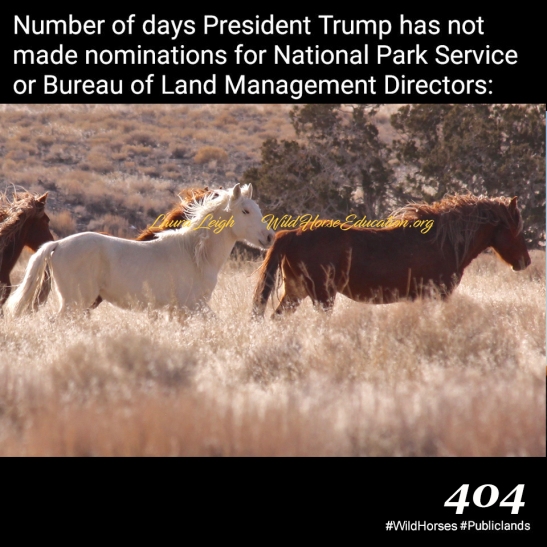 Error code 404, page not found. Funny? Not in the slightest.

For those of us that have spent a lot of time in the world of “internet language” the number 404 means one thing, an error.

The HTTP 404, 404 Not Found and 404 (pronounced “four oh four”) error message is a Hypertext Transfer Protocol (HTTP) standard response code, in computer network communications, to indicate that the client was able to communicate with a given server, but the server could not find what was requested.

There are multiple ways to fix the error like refreshing the page, checking to make sure the url is formatted correctly or checking for malware.

In the instance of the Department of Interior failure to produce a director for National Parks Service (NPS) or the Bureau of Land Management (BLM) it is all about the “malware.”

Wild horses are not a profit driven use, they are a public resource under law like a blade of grass or an ounce of gold. As wild horse advocates this “error code” should be of extreme concern.

Can you imagine working in a place where the structure of directives is completely disrupted for over a year? Public land managers are walking on eggshells. All that comes through the pipeline are things that say “coddle mining and livestock or else.” How else can they interpret what is coming out of DC?

The only person appointed by this administration into an official chair, not a revolving door, is Ryan Zinke, to head the Department of Interior that oversees the BLM and NPS. Ryan Zinke has a long history of relationship with pro horse slaughter and the States takeover movement during his tenure in Wyoming politics.

Freedom of Information Act (FOIA) offices are being told not to share anything and FOIA after FOIA are being redacted to the point of being meaningless. (You can read about just one instance with our work HERE).

New directives on a further fast track for extraction and restructuring of livestock permits are coming through fast. Zinke even making threats to employees after a speech to coddle the oil industry (HERE).

A destabilization event, “take this job or leave,” began this administration with dozens of senior Department of Interior employees simply pulled (read HERE). Can you imagine the effect on moral? To be clear the employees moved first included some that were actually willing to give environment and the truth a small voice in the room. We saw this as a distinct warning to employees.

Now Zinke proposes an entire restructuring of the Department of Interior that may literally meld agencies such as the NPS and BLM, get rid of state offices and many more employees (HERE). As wild horse advocates one of the biggest problem is the lack of people on ground with any real knowledge of site specific areas. The wild horse program being the most ignored in personnel and resources with employees spending more time on livestock or mining than on any single word or effort to protect wild horses and their habitat. This actually spells a furthering of the dilution of truth.

All of this is being done without any appointments that represent the distinct concerns of the land each agency oversees. 404 days without any head of the BLM or NPS.

This clearly creates chaos. Under this chaos is the land a concern? or keeping your job when you do not even know how to satisfy the head of your department, because it does not exist, your priority as a federal employee? As a BLM employee you took an oath to manage for the public good, but what does that even mean anymore? WHE actually ask those remaining… what are you protecting, a big screen TV or your oath to the public at large?

To understand the underlying historic framework, and the politics behind all of this, read our series on the Public Land Seizure Movement (HERE).

Under current US law these actions are illegal. Congress must approve structural changes and oversight agencies are in turmoil. (AT WHE we are continuing to provide information to Congress on the effects of this destabilization on the ground, where it actually matters more than an invitation to the next election ball).

When we look at an operation like the roundup at Triple B? The destabilization is actually extremely evident. As wild horse advocates the wild ones that had eyes poked out, broke necks and babies run in a snowstorm we react in the moment to protect the horse. But there are connections to the big picture and they run deep. (READ HERE and sign our letter asking for an in-depth investigation into Triple B).

This entire picture is more muddled than a soap opera. The only person even suggested in any fashion that could be seen as “official” was Karen Budd-Falen. Budd-Falen is an attorney that has represented ranching interests in legal actions to remove, and even kill, our wild horses. Was it just too controversial to run that agenda in the open? (HERE)

404 days without an appointment to head BLM and NPS? This is not a mistake. This error is malware.

We are doing a version of the document we are preparing for Congress on Triple B, for the public in the form of an E-Zine. The e-zine is intended to take you on a journey into Triple B; horses, land and politics. This microcosm of the wild horse program is one string in the web, yet illustrative of the issues we see program wide. 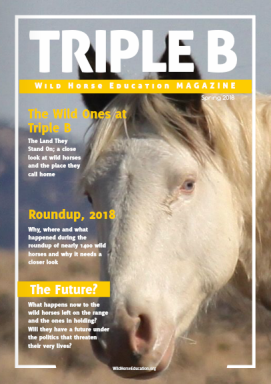 We are not an organization that sends you 5 fundraising, hard-sell, mailers every week. We are not a newspaper that has put up a paywall to our content to protect it and fund it. However we do need funding, just like everyone else does, to keep our work active. We are creating the magazine as gift to donors that give $25. or more to the fight we are engaged in.

We thank you for following and support this work.

NOTE: It has always amazed us that we could point out issues with any past administration and it never caused this weirdness of acting like we are personally attacking some pop idol. We are wild horse advocates and will point out any and all deficits that can hurt them. We have done it with every single administration or political party and will continue to do it. Right now everything that lives on public land is in danger and that includes our wild horses. Politics rule the reality of the range and we have, and will continue, to address any threat to our wild ones.