Wild Horse Organization Pushes for Investigation into Triple B 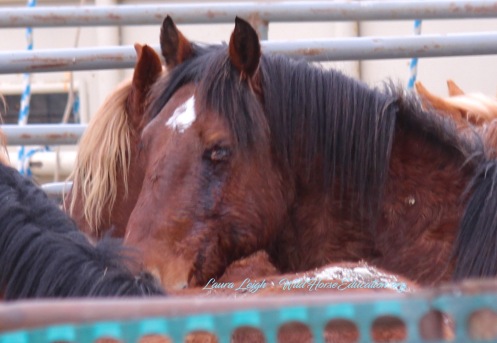 Stallion with his eye poked out in holding at Triple B

BLM Completes Wild Horse Capture at Triple B; does BLM have a humane handling policy?

The advocacy group, Wild Horse Education, is pushing for an investigation into activities at the Triple B wild horse roundup in Nevada. (To add your name, scroll to the bottom)

Today the Bureau of Land Management (BLM) is completing a removal operation of wild horses at Triple B in the Ely and Elko districts of Nevada. Originally the operation targeted 1500 wild horses for removal with about 500 released after the application of a fertility control vaccine. After a pro wild horse slaughter group released a statement against the plan to release wild horses BLM changed operations to include a removal of 1400 wild horses, no release. There is no court order against BLM’s approved Environmental Assessment, they simply changed target numbers mid-stream.

These issues run very deep in the state of Nevada and have very little to do with the range, but politics. When those politics threaten the safety of wild horses it’s time for a serious investigation. The BLM will do an internal review, the group is asking that the United States House of Representatives Natural Resources Committee add this to the pending list  of investigations into the actions of the Department of Interior.

“The public does not understand the deeper things in play here,” stated Laura Leigh, President of Wild Horse Education, “but they understand what is inhumane. This roundup has had at least 27 deaths. This operation has multiple political undercurrents and we are notifying proper authorities.” (such as areas like Cold Creek representing an actual range health issue, not the area prioritized first at Triple B, and yet since 2015 the agencies have taken not action at Cold Creek).

Wild Horse Education (WHE) had observers onsite every day of operations; in the field, at the trap and/or at the temporary holding facility. We witnessed a chaotic operation that saw wild horses run through areas of downed barbed wire, unmarked barbed wire, wild horses with eyes poked out during handling, unsorted bands loaded onto semi trailers for transport with multiple injuries when wild horses were offloaded.

In 2011 Wild Horse Education won the first federal court action in history against inappropriate conduct at Triple B; electric shocks used excessively and on foals, kicking horses in the head and even hitting an exhausted wild horse with a helicopter. The organization continued to win multiple court rulings until BLM implement a Comprehensive Animal Welfare Policy in the fall of 2015.

“We even had to remind BLM that overhead rails all need to be padded,” stated Marie Milliman, WHE volunteer, “It was as if the crew onsite had no idea what the humane policy even stated.” 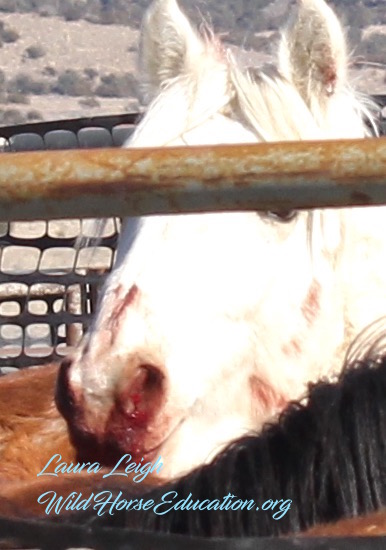 After being loaded on a semi, unsorted, and delivered to holding, multiple injuries were noted including this mare. Wild horses were run in very cold temperatures that day.

“Each infraction we could witness we engaged as it happened to try to address each issue,” said Laura Leigh, President of WHE, “However this operation had issues that went far beyond addressing CAWP. Communications were impeded and chaotic and some of the crew that was put in charge did not even know the geographical boundaries of the Complex. This was not a professional operation by an experienced federal government paid for with tax payer dollars, this was a tragedy of errors.”

Prior to the start of operations WHE, trying to keep  lines of communication open to address the operation for best practices and the safety of the wild horses, warned the BLM COR of the number of extremely pregnant mares and ongoing field monitoring of the area that demonstrated that newborn foals would be born mid-month in the area. On February 14 WHE members documented a newborn and informed BLM. BLM dismissed the concern.

On February 18th WHE crew once again informed BLM that newborns were being documented as a winter storm moved in. WHE asked BLM to suspend operations for the safety of newborn foals. The following day BLM pushed 107 wild horses through the falling snow into a trap; not one newborn.

Image sent to BLM with request to suspend operations

Instead of suspending operations BLM continues to push for the amended target number of removing 1400 wild horses.

BLM has clearly demonstrated that any investment, effort, attempt to engage for humane management, appropriate actions in the field, fair management on range, are meaningless to them. Members of our organization have even endured death threats trying to engage legal process.

We are pushing for a review of all actions, personnel, deaths, injuries and how the change in operations was decided here at Triple B. This operation needs a review similar to the one in 2011. It really is a shame that history is repeating itself. However this time we are asking that the investigation move further than simply an ‘in house’ review as we did in 2011.” Laura Leigh, WHE

Wild Horse Education has been in Triple B; field, trap or holding, since before operations began.  Documentation must be continual and include trend data. We do not have fancy lawyers write a declaration, not come to a roundup and sit in a warm living room, we do the work ourselves. We need your help.

To help us continue to be where the wild horses need us most, and to push for this investigation, please consider helping cover field and legal expenses.

~~~~~~~~~~
We have written a respectful letter that we are sending to multiple oversight agencies. There is interest in moving an investigation forward, we want to show public interest as well. Can you help?