A friend of a friend, that has never met me, drove over an hour to get me a prescription. I was in accident and got a flu at ER, when no one was being tested. Later I got a call requesting I self quarantine. But where I live you can't get anything if you can not drive around. She came to my door in mask and gloves, prescription and flowers. It's been so long since anyone gave me flowers I dont own a vase. I put them in my thermos. #gratitude #actsofkindness #weareallinthistogether❤️ I have 3 days of quarantine to go. #stayhome #staysafe #staystrong
Run Wild, Run Free. Article on @downtownmagnyc by @debmartinnyc . A fast look at history, origin and future #wildhorses. You can access the digital Spring issue of the magazine through the link in bio. #wildhorseeducation #runwild #runfree @canafoundation #fightworthfighting #wildhorsesofinstagram
Spreading #rainbowsofhope during the health crisis. For our wild horses there is a real hope that lies in the power of your voice! You can take action here, please copy and paste: https://bit.ly/2QO8UC2 #wilhorses #wildhorsesofinstagram #fightforlove
I used to make my.living as an artist before life grabbed me, and tossed me hard, into advocacy for #wildhorses and #publiclands I think it might be time to pull out the paints and #rediscover the rest of me? #windowtothesoul #weareallinthistogether❤️ #artheals
Free to watch: Many filmmakers are releasing projects free to watch online to help us all stay connected with our wild horses. Copy and paste .. A list and links. >> https://bit.ly/2J3Qc58 As projects are released we will update the page at the link above. We have been notified that several more filmmakers will be releasing shorts and full features. Big thank you to all of these creatives for their interest in wild horses and their commitment to the community of advocacy. #wildhorses #gratitude @stephanieandmadeleine @dirkjohnson @ken.fall.54
Ulysses... love this poem. Find #leadership during #covidcrisis where your heart and soul need it. This is #soulfood for me #weareallinthistogether❤️ https://youtu.be/aJb_zJbJ7FI Copy and paste to hear her read the last stanza of the epic poem... Tho' much is taken, much abides; and tho' We are not now that strength which in old days Moved earth and heaven, that which we are, we are; One equal temper of heroic hearts, Made weak by time and fate, but strong in will To strive, to seek, to find, and not to yield.
Wild Horse Education

Stallion at temporary from the Cherry Springs area

Edit: Multiple events at this operation have caused us to ask for an in-depth review. You can add your name HERE.

Roundup: BLM statistics from day 16: 50 captured (18 Studs, 21 Mares, and 10 Foals), 2 deaths. (Second half of report focuses on the wild horses shipped off and adoption information).

BLM statistics from day 17: (not yet reported, we will add BLM official report once they update) BLM is reporting 62 captured and the two that were put down at the trap.

Fast observational: about 64 (fast camera count) wild horses were captured; 2 euthanized at the trap (not transported) and one collapsed on the trailer on the ride to holding; 3 deaths were reported to us onsite but BLM is only reporting 2 for his day in official records. Our ability to assess horses is limited.

Today was the first day where more than a couple of horses were noted in lower than expected body score for this time of year (see more on body scoring HERE). WHE also noted much less activity in the pens immediately after sorting (normally stallions can put on a show, and have every day that we have observed at holding during this operation. But even the stallions that were in good shape were quieter.)

Why did BLM remove over 800 wild horses,  that were in good to average shape for February, good range, before getting to this side? Are roundups run by politics, not need? There are many other areas in this district that need attention. Why Triple B at a time of shaky funding for the program?

One colt in particular has us concerned; he will ship to PVC (he may not have shipped to PVC. BLM shipped over 200 wild horses to Litchfield in CA without notifying anyone on the ground of the change) and we will look for him there. We have not observed in any detail horses that have been euthanized, but this colt has us concerned. The trap today was in the Cherry Springs area. Trap moves tomorrow.

Palomino Valley or “PVC” (click here for information on PVC)

Wild horses were also shipped to Litchfield in CA sometime during the second phase of operation. BLM did not notify anyone on the ground of the change and we are editing to add a link to Litchfield, HERE. 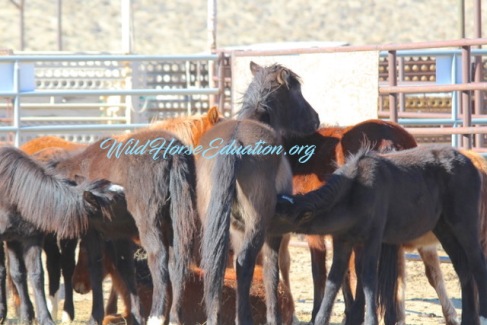 Confused youngsters try to nurse off each other for comfort; just arrived at PVC

A note about the word “foal” as it is used at this operation: Each year a domestic horse owner knows that if they do not know a horses birthday it is considered to be January 1. In BLM reports they are noting “foals.” However those notations range anywhere from a newborn to, quite possibly, a yearling. The number is not reflective, except anecdotally, of any “foaling rate.” Foaling season literally starts now in Nevada and we have documented two newborns not currently in operation zones. We have seen no newborns captured yet, but expect to see them soon.

Wild horses from this operation have been transported to Palomino Valley Center (PVC). We are monitoring holding. Preparation for adoption or shipment is happening very fast at PVC. New brands were noted. Wild horses with obvious injuries noted onsite at the operation location have not been found in the general population at PVC and it is assumed they are in the internal pens not visible to public visitors. We will continue to look for them.

Nevada has more wild horses than all other states combined. The wild ones here are truly “wild” wild horses with very few herds acclimated to a plethora of photographers because they live in places hard to travel and in vast expanses. In many areas of Nevada we still have those mythic valleys you can travel to and see 200 wild ones, separated by family bands, yet moving as a herd. Travel another “road less travelled” and you can see it again. You can’t “walk right up and take a close up” like you can in the acclimated herds of other states (many states have a few herds easier to get to, with easy roads, and/or wild horses used to shutter bugs) you have to work for it. But when you are gifted with that moment that stepped right out of American history, a valley of 200 wild horses grazing and socializing? you never forget it and it is worth the travel.

These beautiful horses from Triple B carry a story just as important as a herd with a breed registry or shutter bug fan club. If you want to adopt a horse that has adapted to the most arid state in the nation, a survivor that carries the “wild” in it’s veins? Consider adopting one of these beautiful Triple B horses.

Her story carries no less value than if she had been captured in a “Showcase” herd. She is no less “iconic” than any horse that has a shutter bug following.

note from Leigh:  I have never understood why NV does not receive more than half the funding of the WHB program for personnel, equipment or consideration, when NV has more than half of our wild horses. When reporters say to me “but you cover mostly NV,” as if that means something minimal because I spend about 10% of my time in Utah or Oregon, I start pointing out numbers of horses and acreage. Then I ask them if they think the proportion of time makes sense to the proportion of horses, then they understand.  I love all of our wild ones and have travelled in 9 different states, but NV truly is wild horse central with more wild horses than all other states combined. Their stories matter.

Wild horses in Triple B, before the helicopter flew