Advocacy in a #Post-Truth World (part one) 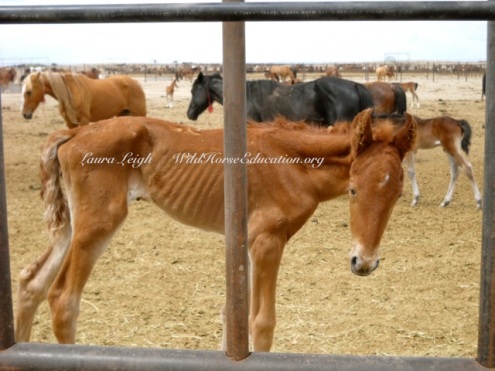 Story of this one photo below the preface for why this has been written.

At the bottom of this editorial we are going to give you a fast illustration using the above photo of post-truth in action. This article will be followed shortly by part two, “The post-truth BLM.” Scroll to hightlighted blue text.

The publishers of the renowned Oxford Dictionary, Oxford University Press chose “post-truth” as its word of the year for 2016. Post-truth refers to the phenomenon of emotional appeal playing a more important role in the shaping of private and public opinion than demonstrable fact. In 2016 alone the use of the phrase increased by 2000 per cent in tracked print. The creation of the word, and it’s increase in use, began long before it was recognized as “word of the year” and placed in the dictionary.

What are the implications to advocating for a living species (wild horses and burros) in the complex physical and political environment?

Arguments are geared to create stronger emotion than the facts on which the arguments are based, if the argument is even based on fact. It is done with intention. The absurd is winning over simple fact. It creates an absurd world.

If you have been following the work of Wild Horse Education (WHE) over the course of the last 4 years the increase in this type of constructed messaging has been a constant source of irritation for us. We have to exist in this absurd construct, but how can we? The consequences to our wild horses, and the larger world we all occupy, has seen an increasing threat to anything that resembles a conversation based on fact to solve complex problems and more like mud wrestling for dollars.

Biased and lazy media, massaged messaging through targeting by public relations firms (all sides, including the federal government) and distorted arguments all elicit the intended goal; an emotional response. In spite of fact checking, legal documents that prove otherwise, published scientific tomes; facts are not impacting voters, donors, supporters, media, federal management decisions and the consequences are far reaching.

How many in the media listen to the myth of the downtrodden “Marlboro Man?” How many of them look at the history of the oppression caused by the Marlboro man? In 2010 we sat at a roundup in Ely. A very powerful rancher, former mustanger, was at the trap. He accused advocates of being emotional. We offered to have a fact based conversation. Every argument  he made was an emotional appeal of needing to make more money because he had kids in college etc. We told him to stop wearing his heart on his sleeve and talk fact. He didn’t, he just laughed.

How many voted in the Primaries and the Presidential election based on facts? The fact is only about 25% of Americans eligible, not registered, actually voted. How many voted based on a feeling, not a fact? How many argued about the election or posted an opinion in debate on social media but did not vote?

Wild horses live in a complex environment and you are easily misled. Face it, as a whole the public is extremely misled. Over the last 3 years roundups have been at their lowest rate since the late 70’s. How many of you responded to social media that used the term “accelerated” removals? Over the last 3 years we have had massive movement to change land use planning. That movement has been engaged en force by every profit-driven industry on public land. How many of you even know what happened? How many of you engaged? (the last statement is directed at those of you that read WHE to look to see what your next mailer for donations to your organization should address).

Our wild horses and burros are in serious trouble, that is not post-truth. The dangers have escalated into an intensity that really does have their lives on and off the range held in a precarious limbo where their very lives will be on the line. The stage is set filled with post-truth props, not facts.

The one and only resolution you need to make for the new year is to leave that damn need to click a button behind. Instead learn to check facts, dig. Don’t settle for the first thing that looks like it might be a fact, dig more.

Let’s make 2017 the year we all reject this tragic word, post-truth. The only way to build real progress that actually changes the world our wild ones live in is by rolling up the sleeves and doing the work based on fact. The facts might come in plain brown wrappers, not fancy paper.

The photo at the top of this page has a “post-truth” story of it’s own. We have placed it at the bottom of the article hoping that people would read the context of the intention, prior to reading the drama storm (WHE has been using the phrase drama-storms, not post-truth, in our writing for years).

The foal had been born in the facility in the spring to a mare captured from the Calico Complex in NW NV in the winter of 2009/2010. The mare was in a pen with other mares that had already, or were expected to, foal. Some of those foals had died and some had been given to a “rescue” that held an agreement with BLM (apparently reimbursement for expenses, but was also apparently fundraising from the public).

The theory was that a mare that had lost her foal (and had her milk dry up) did what is called “foal stealing,” and tried to take the foal from a less dominate mare.

BLM said they euthanized the foal after the public visit and the discovery of the foal in the pen.

This single photo has been ripped off and misrepresented more times than we can count.

The first one we saw was a “rescue” in Florida where the kid running it had gone to a roundup. She used this photo on her fundraising mailers and social media (after cropping it to remove a watermark, at that time Leigh did not place watermarks across her photos or simply put her copyright in a byline). The fundraising had nothing to do with the circumstances the foal was photographed under. It was being used to buy foals at an auction, in Florida (an unconfirmed assertion). When contacted to stop, the thief attacked Leigh as “uncaring” and then simply removed anyone associated with Leigh from her social media lists.

Proslaughter even ripped off that photo, to create their own emotion spin. It was used in a propaganda piece created by Protect the Harvest. The photo was presented as a foal that had been starving on the range due to the “overly emotional advocacy that is never on the range and incompetent federal government,” (yet an advocate they openly attack took the photo). That piece is also filled with images of the Virginia Range (an area managed by the State of NV, not BLM) where many of those involved in the management of that area (Spratling et al) are pointing fingers at the BLM… that doesn’t manage that area.

On “free range report,” one of Protect the Harvest’s dozens of offshoots.

A man that runs a blog where he calls himself a journalist and sits on the board of something that references themselves as a mustang protection organization ripped it off too. That organization is particularly notorious for ripping photos off and presenting them with outlandish claims as they attack others, yet those they attack are the exact people they are ripping off photos from.

That photo was taken almost 7 years ago.

Since that photo was taken it has been used for so many purposes that have no truth in the appeals that contain the photo.

Every single time we attempted to present the fact of the photo we were attacked. Yes, we were attacked. The social media feeding frenzy in post-truth America portrayed us as somehow against the horses because we wanted the facts out there. Our donors were attacked. Our board harassed. Our reputation attacked… while we were winning the first court orders in history against conduct… that yet another organization made misleading statements about to the public and media, to take credit for our work.

The story of that photo represents post-truth advocacy.

Are you looking for drama? Because if you are we now have it in a storm heading over the horizon, real drama. Much of it created by post-truth. If you have fallen for the post-truths, you will never wade through the flood coming. Our wild horses? They will be the ones that pay the ultimate price for it… the push to kill them is in high gear.

(this article was written in January 2017)

A few notes on the playing field: https://wildhorseeducation.org/2017/05/22/posttruth-a-few-more-wild-facts-part-2-the-little-picture/

A few notes about the heavy lifting being done to hide the truth  https://wildhorseeducation.org/2017/05/25/posttruth-3-a-rock-and-a-hard-place-foia-rac-and-litigation/