Mares released in the snow yesterday. Mare at the front fell in trailer, but made it home.

The Elko portion of the Owyhee roundup has concluded. 770 rounded up, 202 released (fertility control), 7 deaths.

Today 42 mares were released to conclude operations in the Elko portion. All wild horse mares released in this operation are older mares, with priority given to mares that received prior treatment with PZP-22. A comment was made that a couple of the mares are “skinny.” These mares are in their twenties.

We have some concern that this type of criteria, repeated, is shortsighted and will create age gaps in the population. Attrition rates in the population will show a sharp decline (as horses die) in the herd structure. Particularly in a system (Complex of HMAs) that justifies operations on movement, where that movement is not documented or really understood. (We will write more about the underlying EA for management in a later post). We really DO understand that the mares that are older stand no chance of adoption and are GRATEFUL they went home. But we need to get ahead of this and create a long term map.

note from Leigh: I was joined on the range by a friend, Mike Lorden, two days ago. I have been here alone and it was nice to have company.My truck has taken a pounding and it was going to snow. I had worked my butt off the night before to ensure access at the release of mares. Mike said he would send a few photos so I could try to get work done and start dealing with my truck. Photos in this piece are from Mike.

Often those that have more time and resource than I do (because I am here) post pictures of old roundups and then show up after the “fervor” hits. A couple of orgs are heading this way.

I can’t compete. Even though I have litigated and won rulings at this very area since 2010, first ruling stopped BLM from closing all public land during operations, and this exact operation is under restrictions against inhumane treatment that I am trying to keep things accountable to, I can’t afford to stay. 3 court rulings and the vast majority of the public thinks someone else did it because they wrote a press release. Or people think no progress is being made because it does not happen with a “click of a button” and the trolls on social media shred progress.

How many of you realize that over the last three years roundups were at the lowest rate since 1978? You don;t because you were trained in “crisis advocacy.” How many of you cast your votes in the election because of that falsehood?

So thank you to all of you “big money, take credit for everything” organizations. Advocacy does not support the cause, or each other. It breaks my heart. When I get mad… I am the problem. Hmm? sounds like they act just like a government agency.

I’m going home for a couple of days. It is so hard to fight for the wild horses when the biggest fight is”your own side.” Advocacy must stop competing and become cohesive… or the next two years we will see our worst nightmares come true. 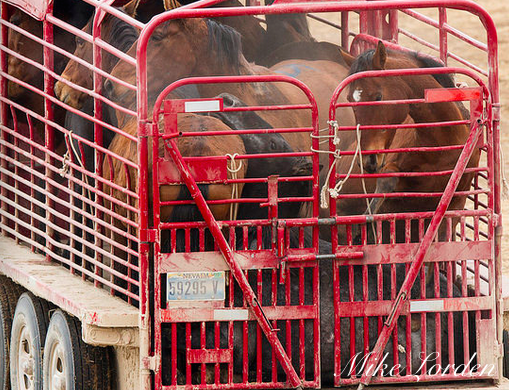 Another fallen mare rights herself and goes home, sore

I am working on an after action of issues that need to be addressed under CAWP and will submit to BLM. One of them is a physical spotter to make sure horses don’t fall and another is that damn trailer floor.