Nod to Our Supporters 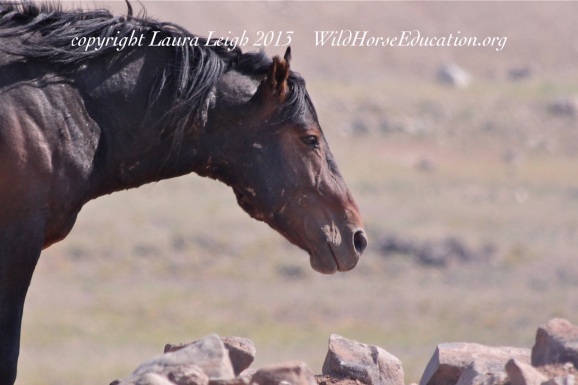 Surviving on the range has many challenges for horses and people

Wild Horse Education (WHE) wants to take a moment to recognize our supporters. Our work is essentially a bottom to top approach that operates from the ground to gather and distribute information that can be utilized to educate the public and other organizations as they engage process. Our work has provided the basis for a lot of successful litigation in the fight to gain access and to achieve the first humane handling policy in history for wild horses and burros managed by the Bureau of Land Management (BLM). Our supporters do not include any corporate sponsorship or big name celebrity endorsements (unless you count the tickets we were given by someone working with Jon BonJovi to enjoy a show and backstage experience in Las Vegas while Leigh was undergoing cancer treatment). Our supporters are primarily people that give relatively smaller contributions that represent that often they have gone “without something” to support the work of WHE.

We thank you for believing in this work. What our supporters give is extremely significant.  Each note of encouragement and contribution to this work has created an environment that WHE operates in that has led us to places and victories that were deemed “impossible,” even by fancy expensive attorneys we could not afford anyway.

In 2010 this work had us running a very twisted road that included constant obstruction to even view what was happening. That type of obstruction included everything from being chased around the desert by law enforcement and threatened with arrest, to traveling hundreds of miles in extreme heat and cold only to be held behind a mountainside by armed guards and public affairs people during capture of wild horses. This was a day to day experience for us and one of constant frustration. We had to maintain professionalism, document what we could and then resort to the only avenue left open to us to engage any semblance of an honest conversation, litigation.

We brought litigation without any guarantee of a successful court ruling. It was necessary litigation  because of a failure to recognize our willingness to appropriately address real problems. The litigation gained both public attention to grievous deficits against First Amendment Rights and inappropriate conduct against wild horses, but it also brought successful court rulings. (We now have both Access to view operations and the first humane handling policy for wild horses and burros since the Act to manage them humanely was passed in 1971 as of 2016).

Two stories that have given us more than a gallon of gas.

(The above video is marked 2011 even though the roundup began in 2010. BLM operates on a “fiscal year” that begins in October. At that juncture we had already disconnected from the outside world and operated in “BLM land.” For us 2011 began in October of 2010. In one way it’s funny, in another it shows places where the reality of one world disconnects from the rest of the world).

In 2010 we ran more than 100,000 miles attempting to document wild horse roundups. We would travel in extreme heat to cover a story for a magazine (Leigh was freelancing at the time) only to have our press credentials ignored as access was given to journalists selectively. We would travel in extreme cold to be held behind mountains. We did this day in and day out. We were eventually successful in litigation, but it took time and energy.

It was the holidays. People were gathering with family and friends. WHE (Leigh) occupied a run down hotel room alone when we got a note from one of our supporters.

“My daughter sold cupcakes at her holiday fair at school. I added the extra to make the $10. in this envelope. My daughter is in second grade and wants you to continue to protect the wild horses she loves.” That note was written in a Christmas card drawn by the second grade student.

“I was so tired and so sad. I was caught in this really dumb cat and mouse game and watching what was happening to the horses. I was listening to people tell me how they were ‘different’ than this our that district while I was being subjected to the same nonsense over and over. It was biter cold and storms would float in and out. I was watching the town put up their holiday decorations and I felt so alone.

The day after I got that note I knew that even though storms were moving in and out that the choppers were flying. I drove 4 hours to make the holding area on the range BLM said I needed to meet at, not a parking lot or office. It was snowing and the roads (dirt) were either mushy or ice, so the drive took longer. I did not know where I was going except the vague directions I had been given that involved things like ‘you drive up and down and around a curve and stuff and when you see the tree you know you are going the right way.’

I wanted to go back to the hotel. The roads were bad and so were my tires, but that note kept repeating in my head. A second grader had sold cupcakes so I could watch her horses… I did not want to let her down. I just hoped that if my truck slid off the road someone would look for my body come spring.

I made it to the meeting area where I was informed that a decision had been made that the road to the trap site was ‘too rough’ to bring the public too and I was only permitted to document the holding area.

The public affairs person in that district turned out to be someone I actually had to lead out of the range in the snow as she panicked because it was getting dark. Not a surprise my directions were so bad. But once I find my way in I can always find my way out, so I led the frantic woman out of the range. But I made it in and documented those horses for the second grade student that believed.” ~LLeigh

In 2016 we are faced with may challenges. One of the greatest challenges is creating a conversation that recognizes the deficits in the root problems of the BLM wild horse and burro program, range management. Those conversations must address the issues honestly to change the faulty practices of the past. That requires recognition of the past, respect for the past and a willingness to address it, not continue to justify the errors.

WHE did a “Trivia Challenge” and gave away a couple of t-shirts. It was the first trivia challenge and we will do more. It focused on some of the work of WHE. It received an incredible response. What was so thrilling was that a lot of the people that responded were young. The knowledge base of those responding extended far beyond recognizing some images posted in the contest, it reflected an understanding of what WHE does and why.

Running the road like we do it leaves little time for “normal” things like checking a mailbox every day. This was in our mailbox: 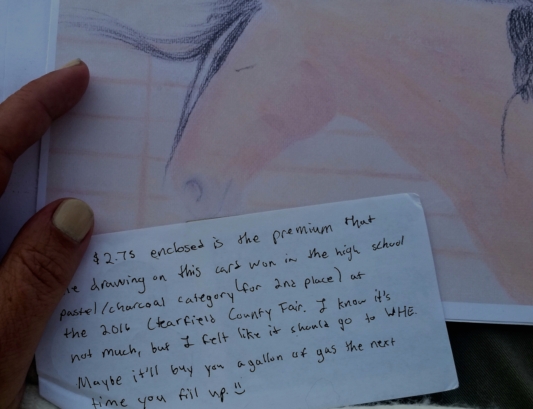 The note inside the card was from a 10th grade student. She drew the picture from one of the photos we published from the last tour of Broken Arrow (Indian Lakes, Fallon NV).

“I put this card in the visor of the truck. I get very frustrated because I see so much of the negative aspects of this fight. I see people forwarding agenda and losing their integrity to do it. I see very little change on the ground. I am constantly hit with fictional obstruction. We have enough true obstruction and need for drama slows progress and that creates more drama. This beautiful card gives me hope. It gives me hope that all of the work and writing is reaching people. It gives me hope that when I am gone, I won’t live forever, that there will be a ‘next generation’ to tackle the tasks I could not. It gives me more than gas in the tank of my truck, but gas in my spiritual tank to take another step.”

We are also getting a lot of questions from the public like we have always gotten. But the questions in our inbox are demonstrating a depth of understanding that we have not seen before. The questions are begging to delve into the area of engaging process in depth, not simply being reactive but proactive.

We are working on another QnA video.

Our gratitude to all of the people that believe in the work of WHE. It is your belief that sustains us. Have a great weekend.

~the volunteers at Wild Horse Education