Truth and Consequence, Wild Horses in 2016 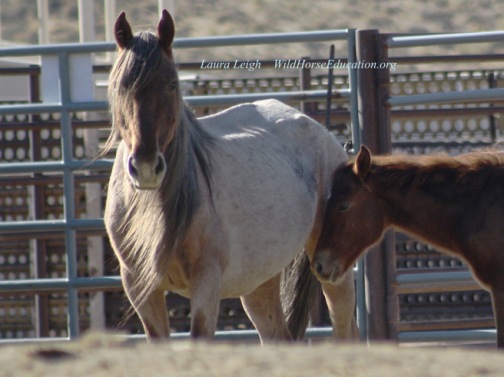 The Bureau of Land Management (BLM) manages more wild horses than all other jurisdictions combined. BLM operates on the federal government “fiscal year” that begins in October. So everything that is happening is considered “fiscal 2016” for the BLM. The budgets that control activities are 2016.

There are two public “hot button” issues at the present time; slaughter and roundups. Both of these issues are not new ones. However there are current developments fueling both of these agendas. To read a post on 4 of the issues in advocacy today go here: http://wildhorseeducation.org/2015/09/20/whe-cut-to-the-chase-major-discussion-points-in-advocacy-today/

A lot of people are scratching their heads as we see a large scale removal to begin in Oregon (1200 wild horses) and an active EA that has the objective of removing 1700 from Wyoming. Just these two removals will outpace the yearly totals of removals for the last couple fiscal years and every expectation the public has set forward at every BLM meeting over the last year. We have been repeatedly told “no money to remove.”

When you look at areas where wild horses live on a “case-by-case” basis you really begin to understand that “managing wild horses” is not a driving factor for the wild horse and burro program, other uses are. There is real range degradation in our American West. The vast majority of degraded habitat is not caused by any “over population” of wild horses (regardless of set AMLs that often fail to be based on any valid “use equation”). It is a failure to base domestic livestock use on any valid sustainable equation. The grazing program began on sick land that has never truly reached any vision of “healthy rangeland,” but has always used historic use as a baseline.

Today we have multiple “LUPA” (we know, a new term for y’all to understand) for Sage Grouse. A massive record of management documents to avoid a listing of sage grouse. With those documents come money, a lot of money. There are massive projects that are going to thin juniper and reseed areas (a lot of people see that effort as creation of “cow chow”). There is funding to achieve “rangeland health.” You do see the connection?

A continued lack of support to engage underlying process will lead to more removals. Underlying process involves many layers of land management. It begins in Congress and is translated down through land use planning and the creation of documents that create the “living” practices of law. A “fast guide” to part of the process can be found here: http://wildhorseeducation.org/nepa/

We know that engaging the process is not a “sexy” sell to the public. Putting out social media blasts of a stack of papers with the tagline of “urgent” would likely not get many shares. But that is what happens long before a roundup. A roundup is usually far too late to engage a process to achieve freedom. Successful actions at a roundup have been to gain access and against inappropriate treatment. (At roundups WHE does not just “take pictures” as we are accused of by those that are not familiar with our work).

The public likes media. Over the last few years there have been great pieces that expose the fact that “we have a problem.” Two of these won Genesis Awards last year.

Owyhee Complex, Winnemucca District Nevada 2012. Horse flips over barbed wire and then court orders against conduct. This is the story media wants. We want to stop things before we ever see this happen again.

NBC did a large segment that ran in multiple venues. The main segment was titled “Cruel or necessary? The True Cost of Roundups.” The piece carried multiple sidebar items including a piece on the 1700 wild horses sold to kill buyer Tom Davis. These pieces took almost a year to create. As we were dealing with multiple court actions, documenting roundups in 2012 (we drove over 80,000 miles that year documenting removals while we were in touch with the producer). We opened our entire video library and spent days providing court documents to legitimize the production.

Another award winning piece was done by Travel Chanel for “America Declassified.” The segment was called “Missing Mustangs.” Wild Horse Education’s Laura Leigh worked very closely with this production as she did with NBC. Leigh even helped design the story. She turned down the “narrator” position and suggested that Pulitzer prize nominee Dave Philipps, that she had worked with before, would be a better story for their purpose. Leigh was also fighting breast cancer, had multiple surgeries and was beginning radiation treatment as production began. You can view the segment below. (The black spaces are for commercials, just wait them out for more. Please NOTE that the footage close up of the roundup, from inside the chopper and broad spaces with a lot of horses running in long term holding, not on the range, were provided by the BLM to Travel Channel. TC was not permitted that close)

While we are on the subject of Dave Phillips, another powerful piece to share is the ProPublica expose on the horses sold to Tom Davis. That situation is still unresolved and needs to be. http://wildhorseeducation.org/2015/08/31/all-the-missing-horses-still-no-answer/

This year, just like every other, WHE has engaged multiple media venues. Every project takes time to create. This year we have struggled hard to get the media to understand that the “roundup” may give a dramatic background, but the stories need to go deeper if they are actually going to be of any use. In every instance we have had to “educate” the media to the pending crisis in management. Each step of the way we have had to “debunk” many layers of propaganda. Some of these stories should begin to surface soon.

If you are looking for a large story on wild horses done by media please share the NBC or Travel Chanel piece. They are very good at introducing people to the issues that are the same today. What we need is a deeper story and we need it now.

Things are going to get much worse as we enter this next phase of public land management. If we do not engage it the media will get that dramatic story. It will be the story of the end of wild horses as we know them. We will see herds sterilized. We are on the verge of Saylor Creek, an HMA in Idaho, being turned into a holding facility of sterile animals. That one HMA could set the precedent that ends everything. The $11 million dollars placed into research into sterilization is a good indication of what we will face. If land use planning is not engaged on a case-by-case, site specific effort to create real on the range management that protects wild horses and the resources they need to survive, our wild horses will face the consequence of that failure. 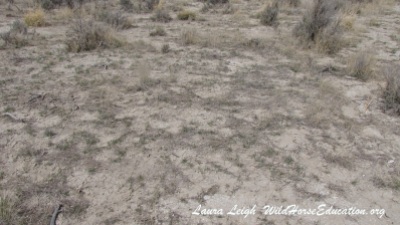 Wild Horse Education Spring 2015 drought monitoring of a livestock grazing allotment in the Elko district of NV, this area is also an HMA

We apologize if a desk filled with paper is not “sexy” enough to make a “meme” of for social media. We apologize that images of battered and beaten landscapes and animals showing the first signs of distress are not dramatic enough for a news editor sitting behind a desk.

The advocacy is all our wild horses and burros have. An educated advocacy is more important than ever. Let us not include that as a failure in our final apologies.

We must have support to continue our work. Without it, we can not engage.