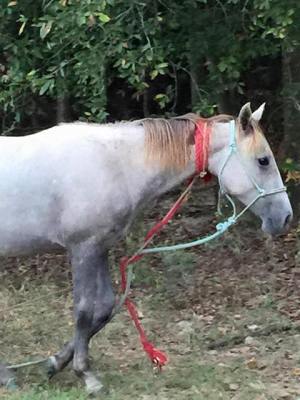 Image and video of this horse at Polk have gone viral in social media. A failed attempt to capture left this horse with difficulty breathing and in danger of strangulation or a broken neck

(Kisatchie, LA) According to the Army nearly 700 horses roam an area of Louisiana that falls under the jurisdiction of the military base at Fort Polk. They are claiming the horses pose a threat to the safety of military personnel during training exercises. Historically the base has allowed a “free for all” where the public receives permits to remove horses. This practice placed both equine and human safety in jeopardy and many residents say horses are simply sold to slaughter. Public comments and plans were submitted. The base is reviewing comments and has said they will announce a final plan in January of next year.

Instead of waiting for the final decision the base simply has kept the historic practice in place. Permits for a member of the public to enter the base to capture as many as 4 horses per person have been issued. No methods for humane capture are outlined or overseen. No method for oversight of what happens to the horses after capture exists.

“I am heartsick,” said Mary Brocato of Louisiana Horse Rescue Association and Fort Polk Horses of Kisatchie Guardians.  “Horses are being chased, roped, and  darted with tranquilizers. We have eyewitness accounts of one dead foal. I am so disappointed that the Army is allowing this dangerous practice to continue. This is not what I thought our military and our country stands for.”

Laura Leigh, Founder of Wild Horse Education (WHE), documents wild horses in the West and has been called a “particularly litigious” advocate as her group has filed (and won) multiple court actions against management practices by federal agencies such as the Bureau of Land Management (BLM). Leigh’s group has stepped in to assist organizing an effort to stop the cruelty and the rising danger to the public.

“Our federal government seems to have a standard policy that allows pending danger to escalate to a boiling point and actually cross the line to ‘immenent’ before it makes any effort to quell it,” said Leigh, “You would expect a better understanding from a military base. It is absolutely an American outrage that horses are being roped, darted with tranquilizers and dying with no oversight. It is a further outrage that nothing is being done to protect the peace of the citizens that care. Of course we stepped in, this type of situation is very familiar to us. We hope to lend our years of experience as an effective tool for engagement.”

Shannon Strong, attorney, has agreed to work on this escalating issue through whatever channels necessary.

“I went to law school because I believe in our country,” said Strong, “When there was an injustice, as a nation, we tried to fix it. That is what is happening now at Fort Polk. As a nation we must try to fix it. From the video and photographic evidence that has been delivered to me, there appears to be instances of animal cruelty occurring on base. The escalation of danger to the caring citizens and the horses themselves, is not an issue we should sweep aside.”

“We want a real plan in place to protect all these horses,” said Amy Hanchey an administrator of a Facebook page for the Polk horses, “We want a real plan in place to prevent this negligence from repeating itself years down the road. Without proper agreements, oversight and a credible organization driving this endeavor, there is nothing that prevents these animals from ending up on a trailer to Mexico. That’s precisely why the army asked for public input and proposals. Why they didn’t allow that process to do what it was intended to do is beyond us.”

The group effort is aimed at forwarding a controlled atmosphere for addressing the problems at Fort Polk. Organizing adoptions, fencing sensitive areas and applying fertility control to impede compounding the existing situation are proposed solutions. 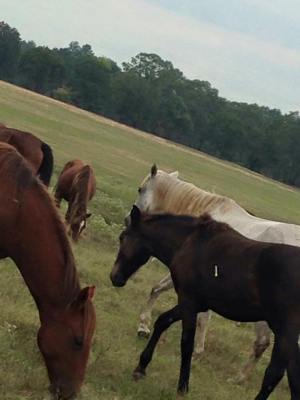 Tranquilizer darts are flying on the base. Are people presenting appropriate certification? What veterinarian is supplying the tranquilizer? Is there any oversight?