NOTE: YES! Sarge has been seen and he has been documented as the herd reforms after release with familiar faces keeping him company once more. At the bottom of this update we give you a link to a page where you can see some of the wild horses documented “Home On The Range.”

Background on Wild Horses in the US

Fish Creek is a wild horse Herd Management Area (HMA) in the “heart of Nevada.” The herd of wild horses that live in the area are a living testament to the history of the land they occupy. Used by man to support our western expansion and successes in settling and cultivating the west, they represent in living form that journey. Wild horses are unique to all species of animal that occupy our ranges. These majestic beings walk in both man’s world and the untamed wilderness. This special place in history has left wild horses subject to every exploitation man is capable of.

North America is the undisputed birthplace of the horse. Fossil records demonstrate clearly that the horse was born and evolved with this environment. Exploitation by early man was a likely cause for the demise of the species as they were hunted and eaten. Current research shows that horses crossed the Bering land bridge and gave their gifts to the world. In the US the most recent research is beginning to demonstrate that horses may never have gone extinct on this continent as early  trade records with Asia and native human populations come to light.

In the US wild horse populations were removed and slaughtered in a practice known as “mustanging.” As mechanization of our world began to replace the horse they were literally hunted down and sold off for dog food, fertilizer and chicken feed. This widespread brutal practice led to the 1971 Wild Free Roaming Horses and Burros Act. (http://wildhorseeducation.org/essential-reading/blm-basis/)

The federal government took jurisdiction over horses and burros that remained free roaming on public land. After the Act was passed wild horses were shot and mustanging continued during the “claiming period” from 1971-1976. Over 17,000 wild horses were “claimed” in the state of Nevada alone as “personal property.” This finally came to a halt when proof of ownership became a requirement mandated by Congress. Outrage by those in the ranching community and mustangers that profited from this practice continues to this day. Federal management of wild horses and burros is seen as further restrictions on what they truly believe is their exploitable personal property, public land and anything that lives or grows on it.

For over 40 years the federal government managed wild horses in a “remove and warehouse” style that almost mimics that of mustanging. No integration of resource protection to preserve and protect a wild population, based on the needs of a wild population, has ever been accomplished. Instead wild horses were rounded up and the “make a buck” system shifted from slaughter to warehousing.

Advocacy efforts of the last decade, supported by intense litigation, began to create foundational blocks for discussions. Much of the allegations made against management practices were further supported by the National Academy of Sciences (NAS) report of 2013. This report, that parroted active legal efforts, was a concrete beginning to discussions focused around deficits in management practices. (NAS report: http://wildhorseeducation.org/2013/06/05/nas-report-a-first-look/)

Last fall, after years of discussions on possible management options, a ten year strategy was created to manage the population of wild horses that exist in Fish Creek. Supported by both scientific research and fiscal restraints brought about by failed historic practices, the plan began on the ground in February of 2015. (http://wildhorseeducation.org/2014/12/24/fish-creek-hma-public-comments-due-january-23/)

Because current parameters exist in underlying management documents dealing with issues such as livestock grazing and all “multiple use” mandates, drought and resource restrictions, a removal of some of the wild horses from Fish Creek did occur. The parameters in the plan limited such removals to wild horses under 3 years of age to give them the best success of adoption. (Many of these are available at Palomino Valley Center near Reno including some of the curly horses featured on an active internet adoption. Of note is that the curly gene found in horses in this part of Nevada are found no where else in the world. https://www.blm.gov/adoptahorse/onlinegallery.php?horseCategory=532)

The operation was “called off” early due to the number of newly born foals making the trap. WHE engaged BLM; the success of the overall plan would not be jeopardized, the documentation and regulations were clearly defined, and the right decision was made. (Some of the documentation from the operation can be viewed by scrolling and clicking on the links http://wildhorseeducation.org/?s=fish+creek)

Captured wild horses that did not fit age criteria were extensively documented. In addition to photographic records and DNA samples were taken and logged of each wild horse slated for return. Mares were given a temporary fertility control vaccine to slow population growth.

However on the date of the release the county and local ranchers, including one found in formal trespass  (grazing cows illegally), Filed documents with the Interior Board of Land Appeals (IBLA) to stop the Fish Creek plan. http://wildhorseeducation.org/2015/02/22/standoff-obstructs-pioneering-effort-for-wild-horses/

Wild Horse Education (brief authored in-house team) filed for, and were granted, status to Intervene of behalf of the plan to release and manage wild horses on the range. http://wildhorseeducation.org/2015/04/02/breaking-legal-status-granted-to-wild-horse-conservation-groups-to-fight-county/ 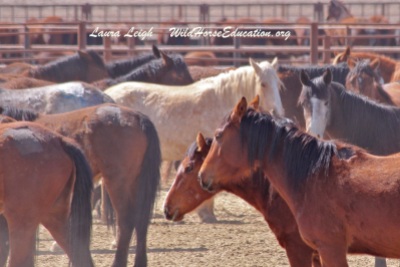 “Julia,” a Fish Creek mare, at Broken Arrow. A hostage of Eureka County.

Wild Horse Education documented the wild horses sent into holding facilities. Included in that documentation was a trip to the Broken Arrow Facility (Indian Lakes in Fallon NV) http://wildhorseeducation.org/2015/03/08/broken-arrow-broken-heart/ This facility was part of a 4 year court battle engaged in by WHE to gain access to wild horses and their treatment by the BLM. Part of an agreement with WHE President Laura Leigh was to open the facility to public tours including additional access if the facility was used to take in wild horses directly from the range. 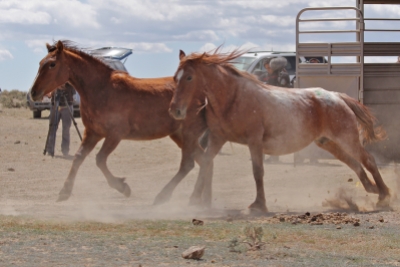 The fight to keep the wild horses from Fish Creek on the range is not over. Even though the IBLA denied ranchers standing in the underlying case to remove wild horses from Fish Creek they are allowing the case to move forward using the standing of Eureka county. The ruling that allowed the wild horses to be returned was recognition of BLM authority to carry out the initial steps of the plan. WHE is active in this fight and is preparing to file additional information.

Propaganda is now being spread by a pro-slaughter organization that has joined with one of the ranchers. The rancher found in trespass last year (he has a 4 month permit to run livestock and ran them all year in various fashions) and was dismissed by the IBLA for not having standing to address the plan, appears to now have the support of Protect the Harvest.

Protect the Harvest put out a series of propaganda videos last year (and pleas for donations) in support of the Nevada Association of Counties (NACO) action against the BLM to remove and even destroy wild horses statewide. The NACO action (we are Intervenors in that case as well) lost in federal district court and is now in Appeal in the Ninth Circuit. http://wildhorseeducation.org/2015/03/12/wild-horses-prevail-over-nevada-counties-suit/ Those of you that follow these issues closely will remember that Boyd Spratling (former co-chair of BLM’s Wild Horse and Burro Advisory Board and member of Nevada’s Department of Agriculture) was a participant in the films produced through Protect the Harvest and United Horseman (another non-profit organization run by Dave Duquette. That organization has one purpose, resumption of horse slaughter in the US).

We are preparing to address the multiple attacks on this plan both legally and through media.

A post focused on the extensive propaganda by the livestock community on drought, and against the Fish Creek operation, will be posted soon on our website.

Our post release efforts to actually accomplish the goals set out in the management plan have begun. Data collection and compilation of information to protect the wild horses is underway. Extensive individualized information is being recorded that includes restructuring of bands, range utilization and herd distribution.

Fish Creek is the largest area a project aimed at utilizing fertility control and creating extensive data tracking mechanisms is being attempted. A success at Fish Creek will point to a brighter future toward managing wild horses free on the range in a broad scale.

The obstacles are many as we try to move management of wild horses into this century. However we are prepared to meet each challenge to the best of our ability.

To see some of the wild horses free at Fish Creek after the release click here: http://wildhorseeducation.org/fish-creek-a-first-look-post-release/