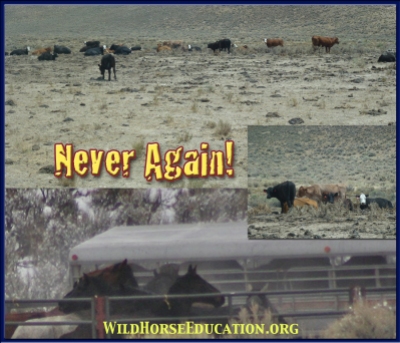 Images from an area of drought where livestock interests united against wild horses creating the NACO legal action.
note: NACO lost in federal district court and is appealing in the Ninth Circuit

As a wild horse and burro advocacy organization we deal with multiple facets of public land management and how they effect the environment our herds rely on to survive. Wild horses and burros only legally occupy 11% of land managed by the Bureau of Land Management (BLM). The resource allotted to the “wild horse” is barely enough to maintain the pretense of protection.

Today Interior Secretary Sally Jewell announced that plans would be scraped to list the Mono Basin sage grouse as an endangered species. The announcement claims “agreements with ranchers to conserve land and other improvements in the bird’s habitat have helped stabilize its population along the Sierra Nevada’s eastern front.”

There are six populations in the Mono Basin area that have not exceeded 2,500 birds. Recently the Gunnison sage grouse was given protection as “threatened” under the Endangered species Act with a population of nearly 5,000 birds.

I am sitting at my keyboard literally failing in any attempt to curtail my absolute outrage. Phrases like “lube up and bend over” keep cycling through my fingers as they search for ways to describe this purely political maneuver. States rights groups have been fighting to gain control of public land from the federal government in large part motivated by potential restrictions to “profiteering” from public lands by mining and livestock interests by the actual listing of the species. Sally Jewell just told anyone interested in preservation of wild land habitat to “take one” in the proverbial backside.

In the poker game of public land management the only real “ace” in play was the need to curtail habitat destruction in the west to preserve the sage grouse. Mining interests and livestock production that devastate wild places were facing the potential of enforceable regulatory actions to curtail that destruction.

In a press release published in the Wildlife News today: “Many of the most serious threats to the Mono Basin sage grouse remain unaddressed, and its tiny and isolated populations are under imminent threat of extinction,” said Erik Molvar, wildlife biologist with WildEarth Guardians. “Today’s decision does nothing to resolve the problems facing this special population, it just punts the issue to the courts.”

In my travels on our western rangelands in no way, shape or form do I witness anything but fast deterioration of our public rangelands. I see political pandering and window dressing. In no way do I see any evidence of Sally Jewell’s assertion that there is any significant improvement of habitat for sage grouse, or any living thing. I simply see “business as usual” as we enter into a fourth year of drought as our rangelands get pounded into dust.

What are the implications for wild horse and burros? The data collected to forward listing of sage grouse species is immense. Experts within a multitude of conservation groups across the western states presented a unified, detailed and site specific case for real protection. Wild horses and burros are way behind the curve in this type of presentation to gain any sane protection of critical habitat that our herds rely on.

The importance of creating site specific and detailed documentation of each wild horse and burro herd has just increased a thousand fold. Legal scrutiny of across the board management practices must become impeccable. Legislators must begin to hear a loud cry from the American public in a relentless fashion that we want the exploitation of our public land to stop infringing on preservation and protection of our overly stressed environment.

As wild horse and burro advocates tomorrows meeting of the BLM Wild Horse and Burro Advisory Board will likely give a hint as to the “cards” ready to be played by the Department of Interior on upcoming policy (our comments to the board can be found here: http://wildhorseeducation.org/2015/04/21/blm-whb-advisory-board-meets/ ). Although lacking in any authority to create or enforce policy the board often projects the cards to be played by special interest groups that are “anti wild horse” in nature.

We remain devoted to gaining a sane conversation that leads to actual actions to preserve and protect our wild horses and burros. We will continue to do our very best to elevate the dialogue to incorporate preservation into broader spectrums of habitat protections.

The “game” is far from over.