At Wild Horse Education our work for the last 5 years has a distinct calendar of it’s own. From July-February we are on the trail of wild horse roundups. From March-June our focus is documenting range conditions to use in the effort to keep wild horses free. Court battles and meetings on issues happen at anytime of the year.

But an interesting phenomenon occurs with media. The attention we are able to bring to wild horse and burro issues from our coverage of roundups creates a “media season.” From February-August we receive multiple requests for material and interviews that have resulted in pieces in ProPublica, NBC, Travel Chanel and much more in print venues including multiple news articles.

This year is no different in requests, but is beginning to show progress in understanding of the issues. In the last month we have provided material to several journalists interested in creating pieces that deal with public land management, drought, multiple use conflicts and wild horses. We will keep you posted as these efforts will be ongoing all summer and likely to produce some in-depth coverage.

Last year we met Michele Blackwell who is working on a film called “Strong Women, Wild Horses.” http://wildhorseeducation.org/2014/06/14/sale-horses-at-pvc-and-on-the-road/ Michele will meet up with us again this year to get an “update” on the work of Laura Leigh and Wild Horse Education. Her visit with Leigh last year was as Leigh was dealing with her personal battle with breast cancer. Shortly after this interview Leigh was hospitalized with complications. We are happy to say that the cancer battle is coming to a close this summer and our founder has one last hurdle to overcome.

The work of WHE is extensive from issues involving humane treatment, access to wild horses and burros, unjustified removals and the creation of management plans that address inequities on the range while keeping wild horses and burros free on the range. However at the core of our work stands the wild horse itself. The poignancy of the truth of the product of current practices that has landed nearly 50,000 wild horses into government warehousing (more than exist in the wild) is shown beautifully through Michele’s edit of her interview and some of Leigh’s work.

Palomino from Michele Blackwell on Vimeo.

For us “roundup season” ended later than expected this year. The Fish Creek operation in February should have seen a release directly from temporary holding back to the range of 186 wild horses. Instead we had a fight on our hands as Eureka County (NV) and ranchers filed litigation to stop it. http://wildhorseeducation.org/2015/02/22/standoff-obstructs-pioneering-effort-for-wild-horses/

Wild horses were trucked from the range to await their fate as literal hostages in this battle to change an archaic system and create modern management plans based on best scientific practices. http://wildhorseeducation.org/2015/03/08/broken-arrow-broken-heart/

While in holding the cost was staggering. Three horses that were slated for release from the temporary corrals were euthanized as trucking them across the state with pre-existing, or sustained injuries, would have resulted in likely prolonged suffering and death in the facility, instead of a fighting chance free on the range. The remaining 183 cost the tax payer $6335.00 per week just for holding fees alone, which totaled just over $25,000.00. Five mares and one stallion died in holding and fifteen gave birth. The mares and foals will be released at a later date. The initial data on the impact of the operation to the ability of the herd to restructure has been compromised beyond repair.

An additional struggle began to include a stallion named “Sarge” in the return to the range. Assertions began that he was a domestic or deformed. Sarge was a dominant stallion observed for years fighting off intruders and breeding stunning youngsters that did not carry his minor club foot. Calm and steady his personality found him under scrutiny. His body was searched and shaved in search for a brand to identify him as a domestic. None was found.

As the clock ticked on and horses began to languish in the facilities, Wild Horse Education, along with Return to Freedom, filed to Intervene on behalf of the BLM plan. http://wildhorseeducation.org/2015/04/02/breaking-legal-status-granted-to-wild-horse-conservation-groups-to-fight-county/ 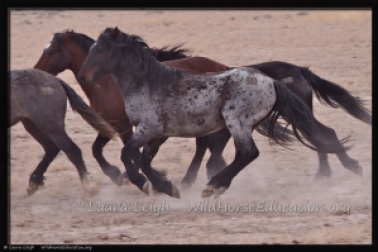 On April 7, 2015 the wild horses from Fish Creek were returned to the range after the court held up the Bureau of Land Management (BLM) authority to release wild horses over “AML,” (Appropriate Management Level). This decision has created legal precedent to move forward with plans that mimic Fish Creek. But the fight is far from over and we must prepare to defend this effort as the case moves on in the IBLA courts. http://wildhorseeducation.org/2015/04/07/freedom-return-to-freedom-at-fish-creek-today/

The release was a tense situation where those opposed to any change in management that will create a “fact, not fiction” approach remained vocally and physically obstinate.

We have stayed focused on the long term goals.

However the “fire” that Wild Horse Education and Leigh drew during the planning and implementation of the Fish Creek operation drew attention from a media that is becoming increasingly aware of the tension in the American West over resources as drought increases. The controversy from all sides, including many wild horse advocates, has spotlighted this important work. We have been very busy providing information and are very encouraged at the direction the media is beginning to take toward addressing wild horses and the reality they stand in. We will keep you posted as these efforts continue (most of these projects go into production and take a few months to complete).

Our work continues to document issues and prepare to address each as they come into platforms that require true debate.

Help keep us on track. http://WildHorseEducation.org/donate