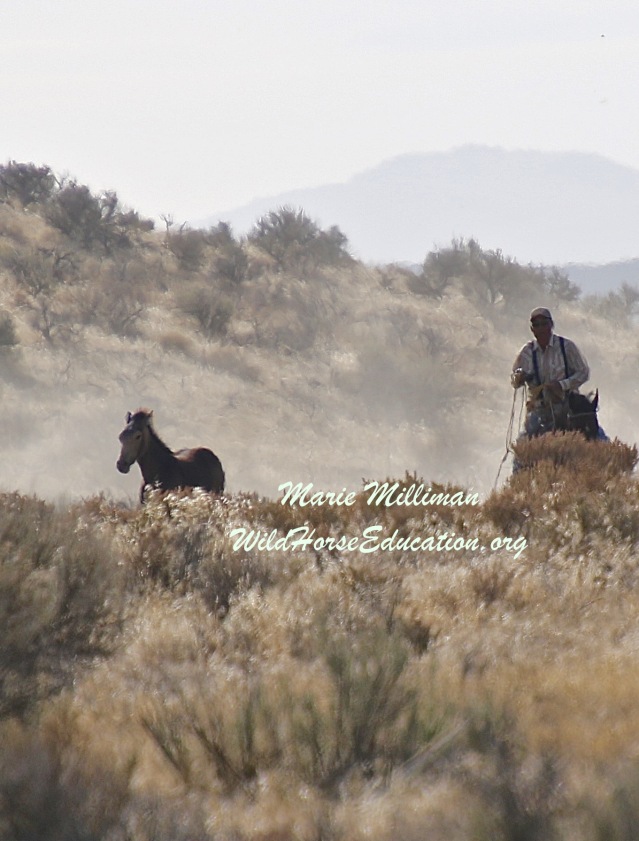 Last horse of the day, a youngster, brought in by riders. Please note heavy grass load in foreground.

previous days report here where you can see some of the types of notes WHE takes at each operation: https://wildhorseeducation.org/2018/09/23/owyhee-roundup-update/

When a roundup begins it is the moment when managing on the range ends. When the roundup begins our advocacy focuses on how to create the safest environment possible for our wild ones that, in this moment, will lose everything they have ever known.

But we are going to use the “helicopters in the air” that have brought your attention to Owyhee to begin a discussion about the underlying issues in the Complex and the obstacles to creating management that is fair and balanced. This article is that “part one” added to the roundup report. 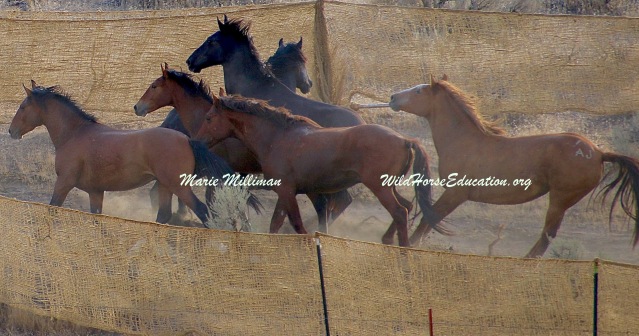 One horse sees a bar (or something) left outside the trap and turns, The horses behind pull up short seeing the chaos ahead. Eyes alert they are pushed forward through the trap.

The Owyhee Complex is made up of 5 Herd Management Areas (HMA’s); Rock Creek, Snowstorm, Little Owyhee, Owyhee and Little Humbolt. The Complex is over 1,000,000 acres and the roundup area outlined in the 2012 EA that creates the “frame” BLM used for this operation covers nearly two million.

The idea that this Complex is “one million open range acres” is not the reality; each HMA is criss crossed with fence lines for livestock grazing. The justification that these “populations mix enough”  is not a data based fact, it’s an assertion. (WHE addressed this with BLM leadership in 2013/14. Then State leadership changed. We will write more on this as the operation progresses.)

The Martin fire raged and consumed nearly 440,000 acres that had from 200-1000 times the normal fuel loads. This fire moved at a rate of over 30 miles per hour.

Owyhee is not southern NV. NV changes rapidly from north to south in amounts of rainfall, types and variety of plants. This is not a “Cold Creek” in any way, shape, or form. 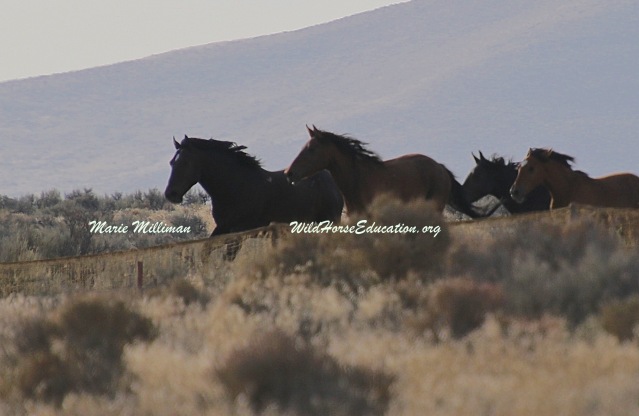 You can see the heavy, high, cheat grass in the foreground.

These horses have been through a lot this year.

It should be noted that in 2016 the agency removed nearly 2000 wild horses from this Complex.

It should be noted the fuel load (grasses) were 200-1000 times the norm that fueled the fire.

BLM target for this operation is to leave the complex with 534 wild horses.

BLM has announced no plans to monitor or track movement, identify critical habitat or water sources for wild horses. There is no plan to ensure that the low AML will not lose genetic material. The removal is being done in one swoop, before reseeding burn areas in grazing allotments.

Dark area is part of the burn scar

There are 5 HMAs in the Complex:

The operation started on the Winnemucca side:

These AMLs are based on an assertion of heavy mixing between populations. There is no data point to back up that assertion.

BLM also has no hard data to back up the boundary lines of these HMAs. One of the most absurd HMA boundary lines in all of the West resides in the Complex. That line is not far from the beginning of this roundup.

In 2013 BLM NV admitted to both the deficits in data on AML and boundary lines. In 2013 and 2014 there was serious discussion toward rectifying those errors. In 2015 those discussions evaporated  under a flurry of death threats.

The gather operation will focus on the Little Owyhee, Snowstorm Mountains, Owyhee and Rock Creek HMAs and the current population estimate for those four HMAs is approximately 1,407 wild horses, which includes the 2018 foal crop. The post gather population will be approximately 534 wild horses. Appropriate Management Level within those HMAs is 573-919 wild horses.

To understand what we will write in the next article please look at the National Academy of Sciences Review published in 2013.   https://wildhorseeducation.org/2013/06/05/nas-report-a-first-look/

We hear many people say “stop the roundups.”

To make any impact on how an area is managed to keep wild horses on range, work must begin long before a helicopter flies. That work can not be expressed or addressed in a meme or a sign on letter.

When there is a roundup at Owyhee it draws a lot of attention. Many organizations will write about it, fundraise off of it.

When the helicopters leave, so does public interest.

Our work at Owyhee spans a decade. A decade of struggle with politics on all sides, alternative truths spun to promote momentary agenda.  Our attempts “at everything lawful” and within our means tossed out under threats, lies and politics (on all sides).

All of it built on a management foundation of entrenched habit, myth and political pressure.

More on that in the next article.