NOTE TO READERS: There are some serious issues occurring right now as a bill moves forward to turn public land private. There are troublesome development with riders (changes) in the Defense Appropriations bills that will effect the environment and provide potential funding for BLM spay experimentation. We are focused on that at this time and will update you shortly.

In addition to the story below today the GOP has denied full funding for the Department of Interior Inspector General. The OIG is an oversight agency that is supposed to hold Zinke’s BLM accountable. https://bit.ly/2NqKytO

This fast article is in response to what is in our inbox from readers. Yes, it is true that BLM change the sale policy. This occurred as pressure was placed on the agency to disclose information on it;s sales program.

3 year old wild horse with “three strikes” against her in the adoption program, the fate of more than 90% of wild horses removed in the last 5 years

In May the Bureau of Land Management (BLM) issued IM 2018-066, a directive to increase the number of wild horses sold under it’s “sale authority” program, after inquiries into dropping holding inventory numbers. In 2016 BLM press releases cited over 60,000 wild horses in holding and by 2017 that number had dropped to 45,000 with no explanation offered. (Instruction Memorandum, or IM, is a directive issued from the national office or a state office. This is a national office IM.)

(NOTE for our regular readers: WHE has made several inquires and a documentary film maker got caught in that crossfire.  We gave the filmmaker numbers in holding when interviewed in 2016. In 2017 BLM gave him different numbers. We asked that he maintain the numbers we gave him and ask BLM for an explanation, because we could not get a straight answer.  https://wildhorseeducation.org/2018/05/24/the-fate-of-the-wild-screens-at-mountainfilm/    This was almost exactly the same conversation we had with Dave Philipps in 2012. More on the outcome of that conversation further down in this article.)

The BLM sale program sells, not adopts, wild horses for as little as $5.00 a piece. In 2016 the BLM National Wild Horse Advisory Board voted unanimously to “fast track” captured wild horses into a status where they could be sold off. (the difference between adoption and sale explained here:   https://wildhorseeducation.org/three-strikes-adoption-and-sale-authority/)

This year the BLM has been trucking wild horses all over the country in what they have pushed through social media as “adoptions,” when many of them have actually been sale events. An adopted wild horse is considered federal property until title transfers a year after the adoption. A sale horse has title transferring immediately and that horse can enter the slaughter pipeline. In recent months there are dozens of wild horses appearing at “kill lot” auctions being featured by various rescues nationwide.

Congress has repeatedly denied funding to be used to sell horses to kill buyers, including in the 2018 Appropriations.

BLM is making space to move more wild horses off the range without addressing severe deficits in the federal grazing program or the wild horse program. BLM is looking for fast ways to sweep ineptness under the rug.

“This appears to be nothing more than a federal agency continuing to thumb it’s nose at Congress,” stated Laura Leigh, President of Wild Horse Education. “In April BLM handed Congress a report on it’s entire wild horse program. The report was 25 pages long. When BLM does a single roundup the paper trail is longer than 25 pages. Zinke’s BLM obviously has no respect for Congress, the law or the wishes of the American public.” (Ryan Zinke, Secretary of Interior)

In 2012 Wild Horse Education assisted Pulitzer Prize writer Dave Philipps with an investigation into the BLM sale program. The investigation showed that nearly 1800 wild horses had been sold to a single kill buyer that was family friend with the former Secretary of the Interior Ken Salazar. When questioned by Philipps at a campaign rally the former secretary threatened to “punch him in the face.” Three years later the Office of the Inspector General (OIG) admitted all allegations were true. The BLM changed it’s sale policy to only allow 4 wild horses to be sold to one buyer. (more on that investigation here: https://wildhorseeducation.org/slaughter-investigation/

Since fall of 2016 BLM has not been answering substantive Freedom of Information Act requests (FOIAs). Information on roundups, adoption and sale statistics prior to 2012 have been removed from online portals. FOIAs are not being answered that address the deficits in pubic information including the sale program.

In 2018 it appears BLM is making violating the law it’s new policy. Appropriations is law. Only portions of agency action funded under law are legal. Citing the Burns Amendment of 2004, that has been defunded since 2005, as justification for the new IM it is not upholding an oath of office to follow the law and protect the public interest.  Removing limits to a sale program that were found necessary in 2012 after severe violation was noted is not prudent and is simply capricious.

The public, and Congress, deserve answers.

This preceding is actually not the full story.

The full story on this matter can not be told until BLM releases information on it’s sale program from 2016-2018. How many wild horses have been sold since fall of 2016, when BLM stated they had 65,000 in holding in press releases and by 2017 that number fell to 45,000? How many have been sold while Appropriations denied funding for slaughter sales? Where did those horses go?

We have been trying to find the answer to that question.

In BREAKING NEWS today the GOP has denied full funding for the Department of Interior Inspector General. The OIG is an oversight agency that is supposed to hold Zinke’s BLM accountable. https://bit.ly/2NqKytO

The action item below is critical! Please find time to make the call!

The BLM report to Congress is a 25 page document that is shorter than the Final EA on Caliente. The report to Congress is a demonstration of extreme disrespect to both Congress and the American public. The document is simply a bad joke perpetuated that “BLM and DOI” actually know anything about wild horses. The BLM report is simply a wish list of proslaughter political factions.  (if you missed that report read here:   https://wildhorseeducation.org/2018/04/27/blm-report-to-congress/)

Call your Congressional representative and urge them to:

Deny release of funding for Appropriations in fiscal year 2019 that begins October 15 for the BLM Wild Horse and Burro program (beyond feeding and caring for captive wild horses) until Zinke and his staff create a real report on the BLM wild horse and burro program. The 25 pages provided to Congress by the BLM is not a report, it’s a “wish list” provided by one faction.

Demand that the BLM report to Congress addresses the BLM sale program and where over 20,000 wild horses have gone since 2016.

Ask your representative to demand a full report from Zinke.  25 pages is simply an insult to both you and your Congressman. 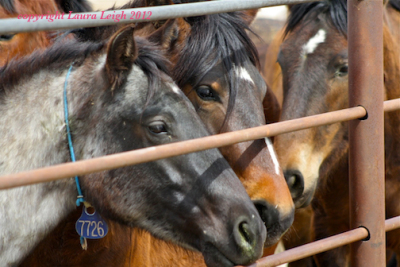 Of particular concern are the wild horses held in facilities that are off-limits to public view (except for a few tours a year) like Broken Arrow on Indian Lakes Rd in Fallon, NV just a few miles away from a slaughter auction. BLM no longer keeps facility reports online.