Discussion; Omnibus Budget and what comes next 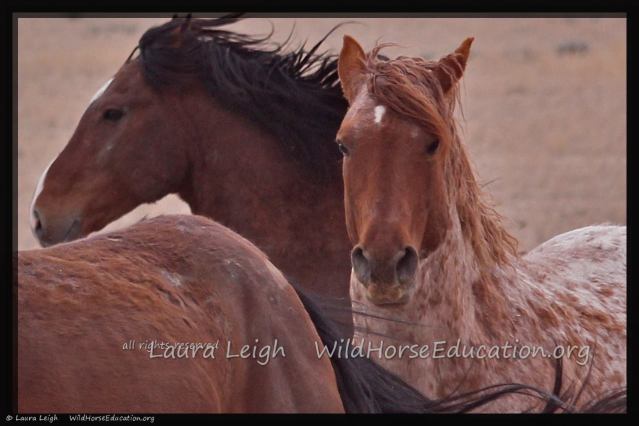 Just after midnight the Senate passed the Omnibus spending bill that maintains protections against sale without limitation (slaughter) of wild horses and stops plans to kill horses to make room to take more horses off the range and save a fractional amount of money (or so the story goes from the Department of Interior). This bill covers fiscal year 2018 that began in October of 2017 and funds the government for about 6 months. In normal years a fiscal year budget is passed no later than the end of a calendar year. The language for 2019 is already in discussion.

The budget will not become law until signed by the President. Signing the bill is expected later today. However this year we have seen that anything is possible. Updates and details on the budget can be found here:   https://wildhorseeducation.org/2018/03/19/silence-is-not-an-option/

A lot of confusion swirled in the public for a year now on the FY18 budget bill. Yes, it has actually been just shy of twelve months that this has been a constant topic of confusion. We ran webinars to try to explain how a bill becomes law, that is how deep the confusion went.

This last round is an over 2,300 page bill that after a year of debate, ups and downs, was crafted and pushed through in days. We doubt any single person has read, or understands, the entire bill. This years “budget bill” process is mired in political drama. Process is harder for the public to grasp.

That lack of understanding pertaining to how a bill becomes law can be extended deep into public land, where a wild horse advocate must understand process.

Wild horse management is a component of public lands. That means that every change in public land practices can effect the wild horse or burro. The last twelve months there has been a literal landslide of legislation both in and outside of the budget bill that effects public land as well as your voice in that process. Wild horse management is actually supposed to be about the life a horse lives before it is ever captured. Once captured that is about the adoption/sale/storage system.

The confusion over simple language addressing the “slaughter/bullet in the head” conversation was compounded with each and every move of this bill. Every time a vote, hearing, or press release came out the public thought this debate had ended. The process itself was not understood, lost under social media soundbites.

The next budget debate has already begun for FY19. This will be a debate before a November midterm election that could unseat every member of the House of Representatives and many in the Senate. With campaigning for the election and the overlap in a new budget debate expect the volume of propaganda to be deafening.

A clear understanding of the legislative process will help you navigate many issues, not just wild horses. That will be a vital component of you maintaining a proactive and effective voice instead of simply adding to the volume and feeling frustrated. (click here to read a magazine from one of our webinars last year that describes the exact process we begin again). This process will repeat until the SAFE Act passes for all horses to protect them from going into the food chain or we have an overhaul of the Wild Free Roaming Horses and Burros Act.

We have seen some comments by the public during the last few days that reflect that the complexities, layers and, essentially, how wild horse management is framed, how it works in practice, are not understood.

This budget does not mean that BLM will stop removing horses. Not only is there a bit more money allocated to that program, no clear guidelines on how that money is to be spent are in the bill. The money is not allocated to hire enough personnel to actually get assessments done, clear up backlogs in field and paperwork, to create a factual baseline for sustainable management. BLM desperately needs this money to be invested in personnel to address essential data (monitoring and backlog of compilation). It was not earmarked and is now in the realm of discretion; used to “solve the problem on the range.” BLM has extremely broad discretion with wild horses and burros.

Last year Mark Amodei (R-NV) made it clear that the push to kill horses (sending them to slaughter was off the table already in legislation) was simply a way to “get attention” out of a desperation he claimed could be solved with fertility control. Amodei does not mean temporary fertility control darting that has be done each year (in NV there are more than half of all wild horses in the US) he means spaying them. There are areas where BLM currently has spaying as a legal option on the table. Remember this is an election year and many in the political arena in states like NV have wanted “spaying and gelding” done for decades as they perpetuate old cowboy mythology about wild horses. (We will do an article later about spaying; an unacceptable practice in field and only done on an older domestic in an extreme situation. Older horses that have contributed genetically would be the only mathematically justified candidates. A horse is not a dog).

The public is also under the impression that spaying was stopped through litigation. One experiment was stopped, not spaying as an option.

Within the realm of “public, private partnerships” are literal contracts to give management (removal, training, data, monitoring) over to permittees. John Ruhs, former state director for BLM NV, spoke openly about his “vision” of management to the state legislature before he departed for his brief stint as acting Deputy Director of BLM in DC. (Note that Jon Ruhs left DC to briefly return as State Director of NV and is now directing fire in Idaho under acting Idaho director Peter Ditton). Many in the public believe that this phrase means those helping BLM do fertility control darting or other projects. Those people have a volunteer agreement or something called an “MOU” in BLM lingo that a more complex mechanism that denotes a type of partnership. Watch for more of these projects (there is one in Oregon already) that allow trapping, darting, choosing animals for training, fertility control (if any is actually done and recorded) to go to property owners (not advocates) where they get paid, not volunteer. These project have very little oversight in an agency that has a backlog on the basics. (We know because we have been listening and participating in conversations and meetings for the last three years where this has come up. We have also seen a draft).

The idea that this budget means BLM has no room or money to roundup horses? In press releases in 2016 BLM said holding facilities were at capacity at the number exceeded 60,000. Press releases today cite around 40-45,000. Wild horses were “fast tracked” to something called “sale authority.” This is a measure BLM adopted after the Advisory board unanimously voted for it. Many of those “Tweets” you have seen from BLM about adoption events are actually sale events (title transfers immediately and horses can be sold for as little as $25.). One such event was held in Texas recently with BLM shipping 100 horses to Texas for a sale event. BLM does not check up on sale authority horses to see if they were simply sold off. (To learn more about the difference between adoption and sale go here).

BLM technically has the room, and the money, to go back to a year like we have not seen since the 2012 gather schedule (fiscal year). From 2007 through 2012 BLM removed nearly 10,000 wild horses from the range each year. Most often they had two operations running from July through the end of February at the same time. From 2013-2017 we had a decrease in removals as BLM said they “had no space or money.” The old roundup videos we have published? Trust us, the last few years have been very different, we were there. Those that used the phrase “accelerated removals” during those years were not factual.

Expect roundups to resume in July without any issues. The schedule is likely to look like one from 2010.

Trying to break through the increasing volume of social media over the last few years to embed a sense of process and the steps that must be meticulously taken, site by site, to create sustainable management, has been nearly impossible.

Everything in this article we have written about before. Changes to your participation in process, information available to you, public land priorities we will write about soon.

The main complaint from those that use our public land for private profit is that BLM needs to remove horses. Get ready.

What you are reading about with the budget battle has maintained the status quo. A battle already begun in another budget debate, for another fiscal year, that begins in October 2018. Please take the time to fully understand the framework, as it begins again.

Are you ready to become an educated advocate? If you are… our wild horses and wild places need you now more than ever.

Please… find out who is running in your districts. Find out how your current representative responds to your concerns about our public land, our horses, your family. Reject the reflex to simply react and research what incites you. If you use social media use it like you would a catalogue. If you see a product you are interested in go and read and research before you buy it.

Your voice and your vote have value, don’t just give it away and get nothing in return.

We have seen so many caring people leave advocacy due to feeling helpless, confused, disheartened.

Progress is possible… but first we need to turn down the volume so you can hear the facts instead of simply reacting to something that might not be true.

Edited to answer multiple comments we have received: Yes, WHE was very active wth Congress on many levels to help maintain these provisions. We are the only mainstream org that did not put out a “victory” message after the House vote, There was still the Senate vote and the chance of a veto in the Oval office. Instead we continued to update the alert age to the movement of the bill. Over the course of this year too much confusion has been created in the public on this issue.

The passage of the budget was not final until today. Today we do not see it as a win but a maintaining of the line. Nothing was gained, nothing lost. The fight for the next budget, the exact fight, is already underway.