During the Civil War years the concept of breeding horses specifically for the United States Cavalry began to develop as the necessity became evident after an estimated 1.5 million horses died in the conflict, including wild horses.

“Mustangs” developed from the Spanish and European horses that had gone wild during the colonial period (that possibly bred with indigenous stock, current research still questions if horses went extinct on the North American continent).  These horses evolved into sure footed fast “ponies” which the plains Indians learned to maneuver very efficiently to fight on horseback.  Their speed and agility, proved to be a most valuable asset against the U.S. Army.

Horses with lineage back to the Civil War, and the United States breeding program, would be bred and serve into the twentieth century up to World War II. 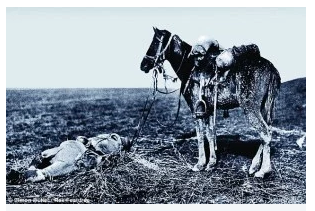 A cavalry horse stands over the body of its rider – from the book The War Horses, World War I

Many of the horses that served the US military came from the open ranges of NW Nevada, NE California and Southern Oregon.

During World War I, and into World War II, military cavalry contractor Harry Winton (sometimes referenced as ‘Wilson’) would roundup horses from the area now known as Sheldon National Wildlife Refuge. The horses would then be loaded onto railroad cars and shipped to the East Cost. From there the horses would make  a trip across the Atlantic ocean by ship. Horses that survived the journey had a bit placed in their mouths and began to pull artillery or serve as a cavalry mount.

American Mustangs served as cavalry remounts for our allies as well; the supply of horses dwindled as the conflict raged in Europe. The cost in horses lives was great.

The most well documented source of “American War Horse,” the herds at Sheldon National Wildlife Refuge, were decimated and “zeroed out.”

Their historic value to our nation was not enough to save them. Not only were those herds destroyed they became ground zero for experimentation that included hysterectomies through the rectum. The structure of intricate herd behavior and normal use of our wild place was inconsequential in light of the desire of hunters to create a utopia to exercise a right to kill. Our American war horses were routinely sent to known kill-buyers while government personnel denied the truth. (We did what we could to stop the slaughter.)

The betrayals faced by the wild horses at Sheldon are far too many to list in this short piece. Our “thank you” to the descendants of the horses that served in war was one of the most brutal imaginable; a knife in the back at a slaughterhouse in Mexico. A legacy of “America the beautiful.”

We have many herds in the West that can trace some connection to our “war horse,” but none as well documented and pure as the horses that resided in Sheldon. (A personal essay, “In Loving Memory,” about the Sheldon from our founder, click here)

Take action today to protect our wild herds and help us stop the corruption behind the threat ALL of our wild ones face. Click HERE.

Trailer from “War Horse.” Imagine being captured in the American West, placed on a train to the east coast, stuck on a ship and sent to Europe. If you survived you had a bit shoved in your mouth and were at war. Our American War Horse … the vast majority of them were born wild and free. (War Horse) It’s a shame this movie never tells you the story of the vast majority of these brave companions.

We need your help to keep fighting for them.