Spring is always a very busy season behind the curtain at Wild Horse Education (WHE). It’s always time to survey the landscape, politically and physically, and make the steps we can to achieve fair management for wild horses. This year the challenges are many.

Often we can get caught in the darkness of this work, but lending a hand to others or a “shout out” to our supporters can lighten the load.

The Canine Film Festival is a yearly event to celebrate dogs. Funds raised in the venue go to help rescues and shelters in South Florida. Our work is always very “wild” focused, land and wild horses. But dogs have played a vital part in our crew, particularly two dogs. We did a short film that will be a part of the Festival in July. You can see events in Florida here: https://www.caninefilmfestival.com/events.html

Just a helping hoof to the paws in need from WHE. (For those of you that follow our work the 5 minute short has nothing you have not seen before except a slideshow of the dogs belonging to our founder Laura Leigh, Elvis and Krieger, and how they helped in the darkest of times). Short trailer below.

Below is a story sent to us by one of our readers that has contributed to WHE through writing in the past. This is the story of Dakota. Her “heart horse.”

When I was a little girl, my dad liked to take us for Sunday drives in the country. I remember looking forward to these drives because I would always see horses. A lot of horses were in green pastures with white fence rails. But then, we would leave the rural ranch areas and climb into the Virginia foothills southeast of my home town, Reno Nevada. I would get excited and stand up on the backseat of my dad’s 1952 Buick so I could see out the window as we wound through the twists and turns of highway 341 toward Virginia City. My dad owned a piece of property in Virginia highlands on that highway. When we turned from paved highway to dirt road I knew, I would see wild horses soon. I looked out for any sign of movement amongst sage and pinion pines. He parked the car on an edge of red dirt road and we would walk a few hundred feet to stand in the center of paradise. He called it paradise and he planned to build a house there one day and live alongside the wild ones. Wild horses to be sure, but there were many wild creatures out there. Coyotes, lizards, rodents, hawks, to name a few. We would sit quietly for a while just enjoying the sounds and smells of the high desert. I knew I had to be patient, but it was so hard to be still and wait. Sometimes these horses were so far away you could barely make them out. They looked like shrubs or short trees on the horizon, until they moved. Other times, the horses were quite close and dad or I would spot them because of some twitch of an ear, or swish of a tail just barely noticeable, or a sound like a twig snapping or rustling branches. I occasionally spotted them, but more often my dad was the one to point them out. It was like he had a direct communication connection to them and knew right where they were.

I asked for a horse every Christmas of my childhood. Never got one though. When I was twenty-two-years-old I bought my first horse. A sorrel quarter horse that I loved and learned with for many years. When he passed away I was in shock and took a break from horses, but not for long. After a year of healing and missing him I decided it was time to get back to horses. I had a friend that was starting Mustangs he adopted from the BLM wild horse adoption program. He was great at picking them for conformation and soundness. He would go to a holding facility where the wild ones, recently captured, stand in lots and await their fate. I have only seen these facilities from the road. My heart begins to race when I get near them and I want to free them all, so I don’t go too close. I have learned that I am more effective using my words and donating money to help with legal support to protect the wild ones and keep them on the range, their rightful home.

In 2006 I took one of my friend’s Mustangs home for a trial. I named him Kola, it means companion. If we did well he would become my horse after the one year check-in from the BLM. I knew I had to have a friend for him. So, I tried a few of Mark’s other quarter horses with Kola. None of them really fit. One mare tried to kick the crap out of him and I had to I separate them and try to regain his trust. Another was a big sweet quarter horse that I had high hopes for. I wanted a sure-footed, level-headed, brave horse that I could trust with my husband or daughter and who would be a good herd mate for Kola.

We decided to go on an overnight and see how we all did together. Mark brought a few of his horses along for training and packing. We had seven horses total. One of those was a newly adopted Mustang pinto. He was barley two-years-old and he had only been with Mark for a few weeks. He was sorrel and white splotched and reminded me a Bev Doolittle painting. He had a vibe that felt Native American. His eyes were intelligent. He would look right at you as if evaluating your intention. He was courageous as we prepared to leave and stood quiet for Mark while he introduced a pad and pack-saddle for the first time. He allowed Mark to outfit him with rigging for pack boxes that were laden with cooking gear and food. Mark took great care to keep the boxes equally weighted while Dakota stood stone still. I expected him to balk and protest at some point. I knew he’d never been saddled or ridden, hell, he had only been in a halter for the last week learning basic ground work in the round pen.

We set out on a mountain trail late in the afternoon. I rode my new best friend Kola and my husband rode the big sweet quarter horse we were considering to buy that couldn’t take five consecutive steps without stumbling. There were four mustangs, two quarter horses and a mule all together. By the time we found our camp site it was nearly dark. There was a full moon on the rise and we set up camp by moonlight in a wide open meadow. We picketed the horses between tall pines at the edge of the meadow full of lush green grass that smelled so rich I thought I might be tempted to graze.

Now, if you’ve ever had the experience of camping in the backcountry with horses you may understand why I didn’t sleep much. A full moon inspires a symphony of life that plays all through the night. Horses picketed by overhead lines munch the remnants of alfalfa cubes and try to reach fresh grass at the end of their lines. Whenever we camped we would turn two horses at a time loose to graze and alternate who got the privilege. The free horses moved between the trees, grazing and snorting their contentment while the tethered ones shuffled their feet, awaiting their turn to graze. A hoot owl announced its watch, frogs croaked in a nearby creek, and the moon gleamed overhead, illuminating everything. I drifted in and out of sleep, starting with every sound, and imagining the bears that would certainly be just beyond the edge of the meadow in the trees.

Dawn broke and with it came the coldest part of the night and a blanket of dew that made me burrow deeper into my sleeping bag. I poked my head out and caught movement in the meadow. There was that pinto mustang out in the middle, he was haltered but grazing free. For a moment I was transported back to a day with my father in the Virginia foothills with the wild ones. I sat up, bleary-eyed and had to shake myself back to present moment, in an alpine meadow, looking at a wild horse. But he wasn’t wild any more, he had been forced to surrender his freedom in a round-up that I don’t even want to imagine. Then I saw Mark in the meadow too. He approached this horse he had named Dakota with such care and patience, he approached with such respect and grace, that the mustang didn’t move, and he wasn’t tied, he could leave, but he chose to stay. He allowed Mark to attach a lead to his halter and they walked about a bit. Then Mark lead him to a pile of gear and let him smell it. Dakota looked at the pile with great interest. He sniffed and stomped his foot. Then he pawed at the saddle and pad on the ground. Once satisfied, he popped his head up and looked straight at Mark. Ready. Mark slowly, gently, but without hesitation, brought the pad to Dakota’s back. Then he added the saddle with the same confidence. Quietly he tightened the cinch. I stood up in my down bag to witness this pivotal moment. Mark lead Dakota to a large boulder and stepped up on it. Dakota stood near the rock and allowed Mark to drape his body over the saddle. His ears swiveled and he looked uncertain, obvious tension building in his body. Mark hung there for a few moments. Then, just when it seemed Dakota might blow-up, he pulled his body off and gave Dakota a moment to think about it. Dakota stood still. I could see tautness in his neck but I could tell he was really trying to work this out and give Mark a chance. Mark waited for what seemed an eternity. Then, finally, he put a foot in the stirrup and shifted some of his weight into it. Time stood still while Mark pulled himself into the saddle. As I witnessed in awe, my sleeping bag around my ankles, Dakota took a few ginger steps forward with Mark on his back. Mark was so calm, so completely focused. Together they walked the length of the meadow. Mark dismounted and walked to Dakota’s head. He put his hand on Dakota’s forehead and I could feel the bond between them.

In that moment, I knew that this was the mustang I wanted to bring home to be Kola’s companion. 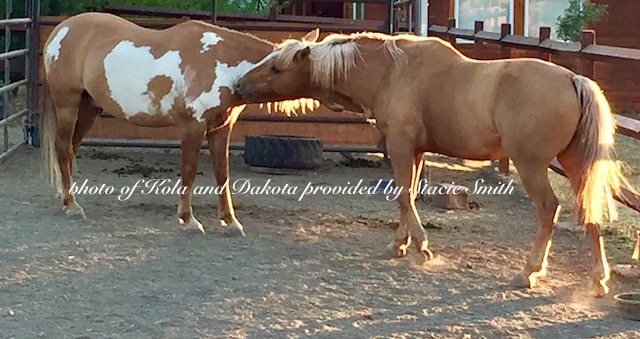