11/15 Update, A Release and more confusion

By Laura Leigh on November 16, 2016
Join us for a live update on the Owyhee roundup. The Elko portion is concluding and the Winnemucca side will begin late this week, or over the weekend (weather moving in). Join us for an exclusive conversation from the field and view video and pictures on the Elko portion. Email WHEAdvocates@gmail.com to be on the information list.

11/15 Today BLM released 49 studs (preliminary number). Two of the horses caught yesterday (11/14) were euthanized due to “pre existing conditions” according to BLM. This information was discovered AFTER I returned to my room. You would think that this would be something important to relay onsite? Or maybe BLM just likes gving information to those that stay at home faster?

Today was a very strange and rather disorganized experience.

We arrived and watched two trailers load at holding. We were told to head to the release area.BLM pulled hair for DNA on only two of the trailer loads (not all).

The trap was set up and we are not sure how the decision was made to run the horses back through and out the trap to release them, never have I documented that in over 7 years. We were set in the “predetermined” spot and told horses would be run out of the trap mouth and we would see them as they left the trap.

Instead a panel was opened in trap on the opposite side. What was photographed were horses getting off a trailer, through alleys and in pens. Then we photographed just the backside leaving the trap.

After being told that the IC would be on the third load and we could talk to him and get another location approved. I asked to go back to my other “approved” location for capture and it was allowed.Good thing because the “IC” was not with the third trailer.

I finally got a shot of what looks like horses being released and “free.”

At one point a truck drove right by the pens as horses were being offloaded, and it was not an issue for the contractor nor BLM. The truck was either rancher or hunter.

Contractors broke down the panels. The last trailer would offload in the usual manner (every release but one of mares and foals documented in the last 7 years) where we could actually see the horses get off the trailer… or so we thought.

Another trailer was supposed to come to that location for a release. We were there for about two hours. The contractor apparently told his wrangler to just offload in a wash down the valley. BLM personnel, the onsite vet and public waited for over an hour and a half… but “I guess the contractor felt it wasn’t important for anyone to see it.” public observer.

Narrative in pictures at the bottom of the page.
Being where the horses are is the only way to know what the truth of the horse is. Not the political truth, but the raw truth of the wild horse, must be lived. Only then can we help them.

This is the view of the studs stepping off the trailer that the BLM decided was the “appropriate one.”

This is the “walk back home” view we were given

Are those horses going back home? Not sure, but I think so.

After “discussion” I got us moved back over to the side we observed trapping from. We were told we had to be really still and wait to talk to the “IC,” to get a better view of the last trailer (that never came). Horses were offloaded into the alley that had an open gate…. and what appears to be a rancher was allowed to drive right past the open gate. 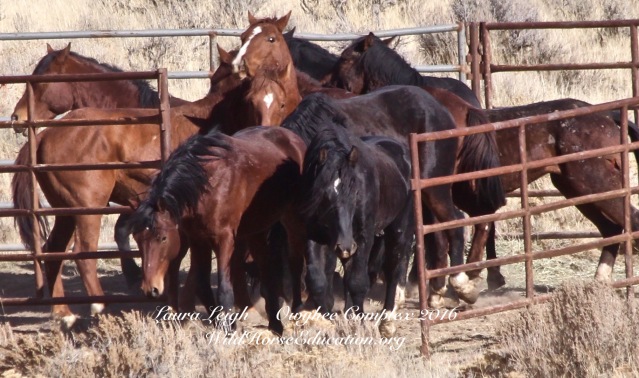 Horses realize the gate is open and I think I see a flank wound on one of the old studs.

FINALLY! A photo worth publishing of wild horses being released!

I want to remind you all that we waited at this location for over an hour and a half more. A location it takes about 3 hours to get to (yes, one way. 6 hours round trip)… simply to see ONE trailer load of wild horses released in the way they always release them, with good access and a clear view of the horses stepping back home. But the contractor told his wrangler “Just release them at the wash.” We (and BLM personnel and the vet) saw NOTHING.

I sent a few emails and made a few calls when I got back. There should be no games today. Does BLM really understand what they perpetuate and empower by allowing these games? Do they care?

My truck is in need of serious repair and frankly, so am I. Another observer went out today and he should have really good access to document. I have some work to do.  I see other orgs (that have published pictures of a roundup years ago and have not been here) are on their way. I have dealt with getting up at 2:30 and about 7 hours of driving every day and vehicle repairs as well as getting reports out. For two weeks I have been out here in the “field of games.”

There is someone else out today so I am taking a break… I need to get some other work done.I need to have enough funds for gas and to keep the phone on. In addition if there was a “scratch and sniff” on this post you would agree, I really need to do laundry.

I was asked “Why are you putting a large watermark that includes the place and year on your pictures? I like to see your pictures, but the mark is distracting.”

I am marking photos because people rip them off the internet, misrepresent them as if they were here, take the stories out of context, or will publish them years after they happen as if it just happened, and add their donate button. I am tired of the disrespect for the effort, expense and grit it takes to get this done. I am tired of the lies… ALL sides.