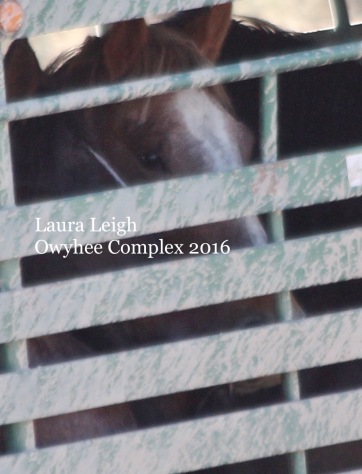 11/10/2016No access at trap. We were told there would be a couple of runs to remove off HMA horses and then trap would move. We sat at holding and watched about 100 horses come off the range. Often the ability to document was blocked by trailers.

We had multiple discussions about the injured horses at the release and worked toward creating a better “communication” plan to address concerns: https://wildhorseeducation.org/2016/11/08/warning-unheeded-disaster-hits-wild-horses-at-roundup/
We discussed working on access. We were told an effort would be made to facilitate the following day.

11/11/2016 Today access to view wild horses is still an issue. We gained permission from landowner, after signing a liability waiver, to view from private property. However I saw three safe viewing locations on public land across the valley that would have provided better viewing. I was told “the helicopter might fly over your head,” even though both locations were in rocks (safe from horses). I thought it rather ironic that the helicopter then flew within 500 ft of our location on his way back to refuel.

The area had been used at least two other days and captured about 200 horses. But the only day I had viewing we saw one run of eight including a small foal. 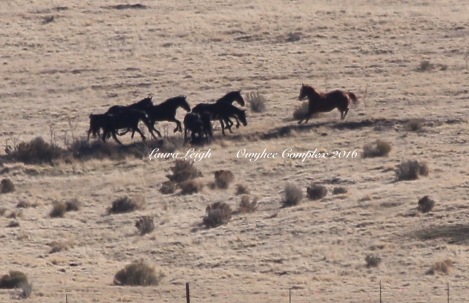 Judas gets a bit confused and runs at the horses not leading them in.

At one point the Judas gets confused and joins the band of wild ones.

I also saw that barbed wire was used as a trap wing. Near the trap they had laid the jute directly over the barbed wire.

To date this operation has rounded up about 513 wild horses.

I think BLM has forgotten that legal action against the ten year EA drew them a TRO from Federal District Judge Miranda Du.The TRO, won by Wild Horse Education, to continue operations was only allowed with specific restrictions that were outlined by the court.https://wildhorseeducation.org/2013/01/10/judge-orders-blm-to-handle-wild-horses-humanely-at-ongoing-roundup/

The last Owyhee roundup was grueling. Being there almost every day, in freezing weather, was rough and I ended up with hypothermia because BLM would not let me warm up in freezing rain between runs of horses.

I have reminded BLM of the courts ruling and the provision in CAWP. We are prepared to take additional steps if it becomes necessary.

It’s a shame I have to constantly do things like that.

It has taken me two hours to enlarge and enhance the photos from today so you can see something. Exhausted, in so many ways… 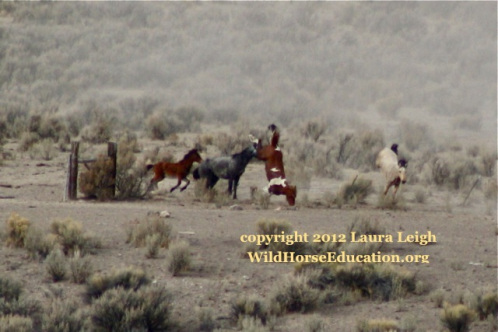 To contribute to our field work and legal war chest click here: http://WildHorseEducation.org/donate   This roundup has already created over 3k in vehicle repairs.