The Road to Freedom, a point on the map (Turner, et al; Montgomery Pass)

To know what your dream destination looks like is not enough. To reach any destination you must create a real world map to get there. Without it? The dream remains an unattainable Utopia in a bedtime story.

WHE monitors wild horses in more than 25 HMAs on a regular basis. That’s a lot of miles to travel. Maps can be very helpful on the ground and at the “table.”

At Wild Horse Education our key goals are:

Access to wild horses and burros on public land, during capture and in holding. Access to all information regarding management decisions and disposition of animals. (We have won landmark court rulings)

Creation and implementation of a humane handling policy during capture and a protocol for facilities that includes an infectious disease protocol and shelters. (We have won the first, and only, court orders against inappropriate conduct as well as multiple ongoing rulings. The first version of a policy was included in roundup contracts in 2015).

Fair and equitable management on the range. The federal wild horse and burro programs have never been created on a scientifically sound data based equation. That includes faulty boundary lines, inaccurate and fictional population management “levels,” and forage allocation. It also includes a lack of equity on participation in process. This needs to change.

Management of wild horses and burros on the range is the core factor that creates symptoms such as crowded holding facilities. Current practices are completely invalid until data based equations exist.

Our work to create management plans that utilize temporary fertility control coupled with a strong data collection component have met violent opposition from all sides addicted to the faulty equation. Activists are addicted to screaming about unfairness and uses like ranching, are addicted to the ability to create a “scapegoat” for all the ills of the range. Identifying an actual reality threatens both of those addictions.

The dream is to have wild horses and burros managed in a humane and equitable fashion. The dream is to have as little interference with the “wild ones” as preservation of habitat to sustain them becomes an identifiable pursuit. But the dream must be built on site specific information that suits the reality of each herd, one by one.

An “educated advocacy” is the most important tool for the preservation of wild horses and burros and the habitat they require to survive. One of the first steps on that journey is recognizing that there is no “magic wand” and that the process is complex, but not impossible, to engage. Reacting to “screaming attack memes” on unsocial media is counterproductive.

The report noted below is presented in it’s draft form. Montgomery Pass Wild Horse Territory (a “WHT” is the Forest Service term equivalent to BLM’s “HMA”)  on the CA/NV border. The report is important in that it brings the information to the table in a scientific format that can be used as a comparative in site specific analysis as we move to create protection plans for other herds.

The report points indirectly to the effects of “over management” of wild horse populations and directly to range degradation due to a lack of management for livestock production. This report is extremely important. It is also important that a clear understanding of the laws involved is taken into account, not “cherry picked” for convenience (as many people cherry pick from the National Academy of Sciences, NAS, report to suit multiple agendas that perpetuate an invalid equation. Counties and ranchers are currently dong a cherry pick of the NAS report in legal challenges to remove and destroy wild horses).

Report summary and notations by Lisa LeBlanc, as a WHE volunteer

“Despite the existence of nearly 180 federally designated free-roaming wild horse populations in the western United States…there are few formal studies of these populations and their environment.”
Dr. John W. Turner, PhD, “Environmental influences on movements and distributions of a wild horse (Equus caballus) population in western Nevada, USA: A 25-year study”

A paper authored by Dr. John W. Turner, an endocrinologist specializing in wildlife reproduction, and frequent partner of Dr. Jay Kirkpatrick, was submitted for approval to the Journal of Natural History in February, 2015. It received final approval in April of that same year.

The report covers a 25-year research project regarding the wild horses of the Montgomery Pass Wild Horse Territory on the mid-California/Nevada border. The importance of this report is in it’s complexities. Virtually every aspect of wild horse existence, from seasonal range use and condition to Alpha mare dominance in herd behaviors and decision making, and the necessity of an apex predator base is covered in this detailed and comprehensive study.

It should be freely available to the public; unfortunately, it can only be purchased ( tandfonline.com ) at a cost of  $50. The provided link is to a PDF submitted by Dr. Turner; it bears some corrections in red, but the complete report is there. (note from WHE, we have purchased the final report but have uploaded the draft which is free to view)

There are few areas in the West where wild equine populations have been left untouched for decades, but their importance is often overlooked or minimized. Dr. Turner’s report should be a benchmark for the absolute necessity of wild equine populations and their environments being closely monitored, rather than loosely estimated. 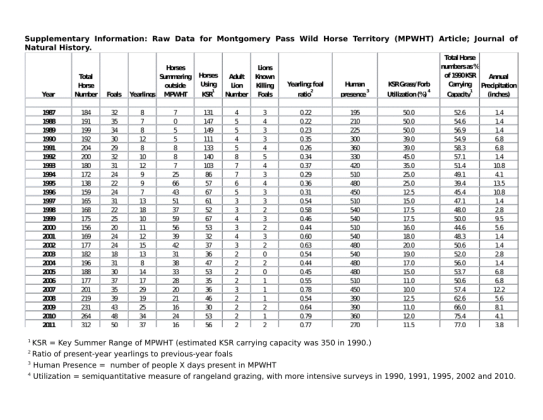 Become an educated advocate. It is more important than ever.

To know what your dream destination looks like is not enough. To reach any destination you must create a real world map to get there. Without it? The dream remains an unattainable Utopia in a bedtime story.

WHE is working the map.