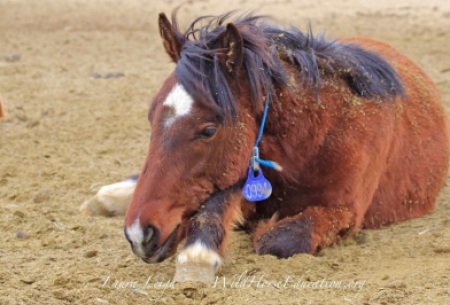 This weanling was available onsite at PVC in 2014, where is he now? Was he ever really promoted? (WHE actually promoted this particular colt last year. This colt was in a pen of yearlings that BLM did NOT promote. PLEASE read the article)

The public and media see the BLM Wild Horse and Burro Program as one single program. It should act as one program. Wild horses removed from the range are supposed to be selected for adoptability to create a balance in the system. BLM policy is to do everything possible to get animals adopted. But the reality is another instance of “how far from effective can we be?”

In essence the program is split into two distinct categories; range management and holding. The range programs receive marching orders filtered through the state office. State offices have no input into holding facilities. Paychecks for the range come from the state budget, facilities directly from national. As with everything “federal,” that creates a situation of boundary issues, one more layer of ineffective communication and objectives.

Adoption pages rarely do anything more than provide a bad photo, a number and maybe a location and date captured. Often the info is missing or inaccurate. If a horse is unlucky enough to be born in a facility BLM rarely takes the time to identify the colt’s mom to at least tell where the baby was conceived.

It is extremely difficult to look at the pages. It is hard to believe people are actually paid to “do this,”holding a job that carries a benefit package most Americans can only dream of. If these people did inventory promotion for Walmart, most of them would be fired.

Back in 2014 we did a piece on the adoption program. We cited multiple inaccuracies and absurdities. We are not going to repeat content so if you are looking for history and some statistics go here: http://wildhorseeducation.org/2014/03/27/analyze-this-blm-adoption-program/

This article is going to focus on the current internet adoption. The information at the link will change as soon as this event ends. https://www.blm.gov/adoptahorse/onlinegallery.php Open the link to follow along with this article. BLM lists Palomino Valley last, so will we. 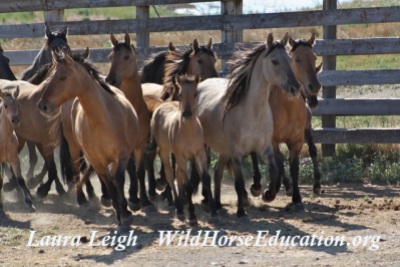 The Burns Corral has all Kiger/Riddle horses. These horses are promoted constantly. Even though the area is essentially a manufactured breeding program, the area has been brilliantly publicized (As an example 14 Carter horses were brought into the area to increase the “dun” factor but Carter has all but disappeared because of a lack of promotion in an area where the range is utilized by powerful ranching interests). All but 4 of the 32 offerings have bids. PROMOTION and stories help get horses adopted. https://www.blm.gov/adoptahorse/onlinegallery.php?horseCategory=584

The DELTA page is interesting for a number of reasons. Many people remember the highly publicized blue roan stallion that died during gelding, he was a Sulpher. There are two Sulphers offered with no bids. 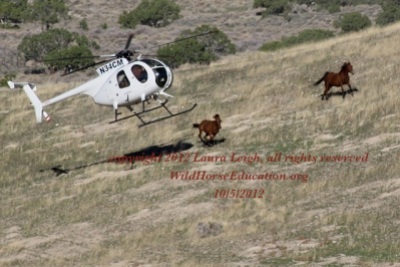 There are 10 youngsters listed with “removed from the range” dates of July 2015 as “Spruce-Pequop,” there are only 4 with bids. You WILL NOT find “Spruce-Pequop” on the BLM gather schedule. This area is listed as “Wood Hills” on the schedule. It is part of the Antelope Complex. If BLM had listed the removal as “Spruce-Pequop” it would have likely gotten a lot of attention. The area is the home of a “wild horse sanctuary” that has brightly colored expensive tee pees and runs cows you can see from the highway. The roundup happened after a landowner complaint of horses on private property and damaging water sources.

Was it intentional to keep relabeling not only the removal operation but then to change the area of designation one more time at arrival to the facility? Are multiple blank pages in the underlying documents intentional omission (more blank pages than we have seen before)? We don’t know. But we do know it makes it hard to promote a horse you change the designation on multiple times.  BLM offered only one day for public observation (Leigh had surgery and BLM would not reschedule) and it appears no other observer went. So if you want to adopt one of these horses know they are “Antelope Complex” horses from the “Spruce-Pequop” and you can find a lot of info on the area, sanctuary and prior operations through a “google search.”

The Mantle Ranch horses are in a category almost all their own. Many of these horses are handled. The percentage of horses adopted is usually much higher than at other facilities. Out of the 11 offered, 5 already have bids.

Canon City is offering 23, not one has a bid. These horses are from Divide Basin, Adobe,White Mountain, etc. There was a lot of public attention during litigation. But we see no ongoing stories on these horses.

Fallon, aka Broken Arrow or Indian Lakes, is only offering 7 horses. This is the closed door facility that houses more wild horses than any other short term facility in the nation. Horses are born there, sent there and essentially spend the vast majority of their lives outside the public sphere. The facility has an alarming discrepancy in death rates in comparison to other facilities.

A tour was given of the facility (only one of two times a year the facility is open to the public) on 10/25. It has been a huge “hassle” after these tours to transfer horses to another facility for adopters to pick up. There should have been at least 20 horses offered and the public given extra opportunity to document and share the available horses. There were only 7 horses listed in the event where the public would actually have opportunity to view them.

We can see the absolute lack of caring about accurate information in internet listings clearly. “Tag-#4052. 6 year old pinto mare, gathered from the Little Owyhee Herd Management Area in California in December of 2012.” OWYHEE IS IN NORTH CENTRAL NEVADA, NOT CALIFORNIA. It makes it difficult not to express real anger that these people are PAID to be so inaccurate.

“Sarge.” He has one heck of a story to tell. Sarge has been manipulated and removed from the range illegally twice, legally once,  returned twice and has now lost his freedom forever.

ON TO PALOMINO VALLEY. We know this is what you have all been waiting to read about. https://www.blm.gov/adoptahorse/onlinegallery.php?horseCategory=589

Yes, Sarge is listed. Furious bidding is taking place as individuals associated with a pro slaughter faction bid from Oregon against a multitude of advocates bidding against each other. (WHE is NOT bidding, nor any individual from WHE).

BLM knew this horse would draw a lot of attention when he went for adoption. Sarge has been used as a flash point for controversy. This poor horse was removed illegally from the range twice in his life and will never be at peace on the range. Many see this horse associated with our founder Laura Leigh. Leigh has said multiple times that the horse she has the closest association with at Fish Creek is still in Fish Creek, just as the blue roan stallion she follows is still free in NW NV. She will not even reveal where the blue roan lives for fear he will become a target. Sarge was known and named by locals in Eureka, Leigh simply enjoyed Sarge and his family on the range, took his picture and shared them over the last few years. We will follow this article with one specifically on Fish Creek and will add the link once published. 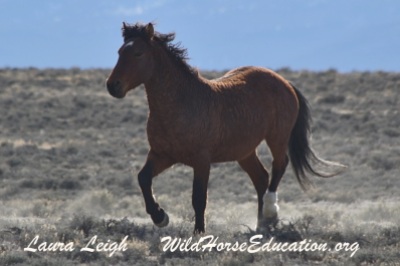 The entire operation at Fish Creek was designed within every constraint from top to bottom in the program. At Fish Creek actions were made to define the herd (more genetic sampling has been done at Fish Creek than in any other HMA, the Pryors are a “Range” not an “HMA.”), use of fertility control in the largest segment of population in the entire nation, create a tracking mechanism that not only monitors the herd but the resource to fulfill all NAS recommendations, operate within fiscal removal numbers set by National within Congressional Appropriation but also to remove the most adoptable wild horses under three years of age.

Bidding on Sarge is over $2000. Perhaps someone might like one of Sarge’s colts? Two of them were captured in the same roundup. Or maybe someone might want another horse from Fish Creek? Perhaps a gorgeous yearling roan? However none of them are listed. Not even an “available onsite” window featuring other horses from Fish Creek.

Ask anyone that works to home any animal, it actually takes thinking and work.

Foal separated and then roped. Humbolt, 2015

There are two listed from Wassuk, captured in 2012. Two Kamma Mountain (also called Blue Wing) horses taken in 2013. One from Humbolt taken from the range earlier this year. 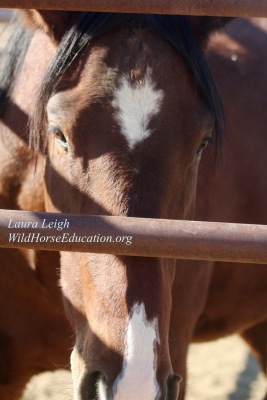 #9989, Second time on the internet adoption. No bids. This horse is one we would bid on if we could. This boy is a star.

EDITED: Charlie got adopted! One horse from Little Owyhee that is actually the likely star of this line up, taken from the range in 2012. This bay gelding that has lived his life in captivity is gorgeous and friendly. You can put your hands just about anywhere. This horse is the one we would adopt if we had funds. The photos do not do this horse justice. Of course he has no bids. This is his second time on the internet adoption in a system that considers wild horses “unadoptable” after being passed over, “Three Strikes, you’re out.” Read here about Three Strikes: http://wildhorseeducation.org/three-strikes-adoption-and-sale-authority/

The rest are in that “born in a holding facility and it was too much work for us to mark who the mom was” category. All with no bids.

As always BLM lists no personality traits on any horse.

When you look at these pages you have to ask yourself “Does BLM want the adoption program to fail?” Why are no other horses from Fish Creek on the page with a horse they knew would draw attention? Why don’t they take the time to match foal and mom? Why don’t they write about the horses as more than a number in inventory? Why don’t they even proofread to see if information is correct?

Can you imagine an adoption event that has a short description about where each horse is from and any noted characteristics in holding? Maybe accept the volunteer photographers (some even professionals) to photograph horses for these events? Where listings take the time to feature horses connected to public interest, not just whatever horse that comes through the gate first?

We guess if you are not embarrassed by what happened with Tom Davis the adoption program is “just fine?”

We are embarrassed for you.