The film Unbranded has been making its way to theaters. WHE promoted the film after having a conversation with Ben Masters, the force behind the making of the movie. We had not yet seen the production. Many WHE supporters engaged to do a screening of the film. After viewing the film our supporters contacted us and asked if we had seen the film. We had not.

Our supporters have requested that we write a review of the film and provide additional information. After viewing the film we see why they made this request. The final product is not what it was claimed to be, the story of a journey between horse and man. Instead the film fails in telling that story and instead attempts to present itself as an overview of a politically charged controversy of which the film maker is a novice at best.

Little hands get a first touch to their new “wild horse” family member at a trap site adoption outside Tonopah NV. We see very little “connection” to the horses in the movie Unbranded, this photo has more.

We had such high hopes for this movie. The story of a journey from Mexico to Canada in an almost “right of passage” on the backs of our American Mustangs. Wild horses born of natures breeding in some of the harshest environments in North America featured in a personal narrative. The film had such potential to be great. It is simply not.

At no time in the film do we learn about each horse. Where they are from, when they were captured and no extended look at any personal traits.

At no time do we learn about each man’s connection with each horse. The experience is glossed over with a few lines that remind you of memes in social media.

At no time does our horseback journey actually take you into an area of our western landscape managed for wild horses.

The “journey” you are promised, never happens in any fashion except a line on a map.

Instead the film makes disjointed attempts to explain the reality of a “wild horse controversy,” claiming to present factual opposing views and factual statistics. But the film fails in that venue as well.

If you think we are being harsh the NYTimes kinda gives the same response. In essence as an “adventure” we get very little of what we expect. http://www.nytimes.com/2015/10/09/movies/review-unbranded-a-3000-mile-trek-on-wild-horses.html?_r=2

However the NYTimes is unaware of the other failings in the film. The film claims to “educate,” it fails there too.

The film maker contacted us during production. They wanted an interview at an Advisory Board meeting. We told them we were very busy on the range as drought issues were escalating and for them to come to NV, the home of more wild horses than all other states combined. Masters said they were not coming to NV. Yet the film contains a piece presented by a county commissioner standing on a range in NV. A range never visited by Masters. No alternate view or explanation is allowed.

The area shown as being “horse damaged” is simply not. The Diamond Complex was the birthplace of a suit brought by the county (a representative is depicted in the video) to not only remove wild horses statewide, but also destroy them (including sell to slaughter). No map of the area is shown (the HMA is essentially cut in half by a grazing fence and horses do not have free yearly access to much of the HMA). In 2015 at the time of this “piece” the area in the movie had no horses on it. Protect the Harvest was over there working on “Borba V BLM,” part of the states rights campaign. We were told that camera crew members were associated. Post filming, a mine was expanding over the mountains, fertility control in that county was shut down and for “video purposes” … wild horses could be hazed through those fences any time.

Images from an area of drought (Diamond) where livestock interests united against wild horses.

There are too many instances where the wild horse program is addressed as a “problem” without context.

The National Academy of Sciences Review is noted several times, yet misquoted by a “talking head” that the film uses as an “expert.” Fact checking, what a concept. At the bottom of this post we will give you a reading list to address much that was not covered in the film. 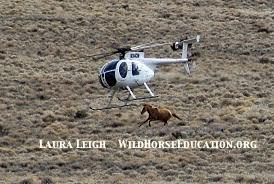 Did the wild horses in Unbranded experience something like this? We are never told

One of the most telling moments that this was NOT a story about the horses came when the mustangs panic on the trail from the “sound of a chopper.” One horse even takes off running. The horse does not run half a mile and stop, the horse takes off. The flight was so significant it causes one of the team members to miss a part of the journey, even spending the night away from the rest because the distance was too far to travel back before dark. At that juncture any real story teller would have told you where that horse was from and when it was captured. Perhaps even locating footage of the capture? Was it one of the roundups stopped by court order because of conduct issues? WHY did the horse panic?

A real “story” would have explained to the viewer why the horses were afraid. Instead we are simply informed that Masters was annoyed that the journey was interrupted and all participants did not travel every mile together.

This film is nothing more than a “frat house ego romp.” The story telling never happens. We had hoped for more.

A few facts about livestock. IF you are going to present an interest as “infringed” on by wild horses you really should get to know the accuser.

The livestock industry operates at a loss to the tax payer of nearly three times the amount of the cost of the entire wild horse and burro program. Livestock interests use about 66% of public land and are allowed nearly 80% of all available forage. Livestock is the single most destructive surface action on public land. It produces less than 4% of the beef utilized in industry, domestic or import. (Wild horses occupy about 11% of public land and are allowed less than 16% of the forage in those areas).

Livestock interests have resented the passing on the 1971 Act to protect wild horses since it began. Ranchers (and others) used to participate in what was called “mustanging.” This practice was brutal. Wild horses were run down by airplane and trucks with no oversight. The captured horses were loaded and ground up for chicken feed, fertilizer and dog food. It was a fast “cash crop.”

The federal grazing program began on “sick land.” Our western landscapes were being destroyed as rancher killed rancher, shepherd and homesteader over a blade of grass. There has been no broad legislation to reform the grazing program since the passage of the Taylor Grazing Act (to stop the bloodshed) in 1934.

There is a huge push by livestock interests and counties in “cow country” to resume mustanging and reopening horse slaughter plants in the US.

Wild Horse Education has won multiple court orders against inappropriate conduct at wild horse roundups. This issue has been one of the most widely covered by news media around the globe when we discuss wild horses. Unbranded completely ignores the HORSE when it panics. To us this is the single most telling indication that the core objective of the film is NOT THE STORY OF THE HORSE.

The video below is just one. This was created during litigation at Owyhee and simply shows incidents occurring on three days of a roundup that has hundreds of video that shows much more including a youngster being trampled.

We apologize for taking so long to respond to the request for links. We are “in the trenches” and hope to report more soon.