What is a “Wild Horse” DNA?

One of our goals at Wild Horse Education is to educate the public on management practices that surround our wild horses and burros. That includes not only information about wild ones on the range or during and after capture. Wild horses and burros exist in a complex system of public lands management that can be confusing until you get the “map” of the system.

There are several operations being planned for winter 2015. We are going to give you sample comments when appropriate, or explain to you why there is no “comment” period to some of the decisions. Our explanations of process in no way endorse many of the operations. We are simply explaining why.

Notation from Wild Horse Education: If you read our “Overcrowded vs Overpopulated” section you will get an idea of the overall position of WHE regarding a need for underlying gaps in data to be rectified prior to any true definition of “excess wild horses or burros,” the “flashpoint” of authority for removals under law http://wildhorseeducation.org/2014/11/10/overcrowded-vs-overpopulated/. We feel that in most instances wild horses and burros are not managed in any way that understands viability and sustainability, yet reflects a “let’s give the horses the leftovers” type of management perspective as forage is inappropriately allocated also with a lack of comprehension or scientific basis, to private interests.

We are going to start the explanation of a “DNA” with the Pine Nuts.

Yet there are no “action alert” comment forms to sign circulating the internet. We have been asked “why?”

In “BLM” speak a “DNA” is not a reference to genetics.

DNA stands for “Determination of NEPA Adequacy.” In other words, they feel all the paperwork needed to “justify” the action under the regulations has been completed. The “public comment period” on the assessment document to proposed actions on the underlying paperwork was in Summer of 2010 for this “DNA.”

In years past we saw comment periods to most Environmental Assessments done for roundups. Most assessment documents during those time frames were for single proposed actions, not actions based on multiple year objectives. However that changed and documents began “multiple year objectives” to cut down on paperwork. This particular DNA asserts such a document as sufficient underlying “NEPA” requirements https://www.blm.gov/epl-front-office/projects/nepa/42589/52583/57278/Signed_Decision.pdf

In order to determine if a new “EA” must be done BLM uses a “NEPA compliance worksheet.” This is the one for the Pine Nuts https://www.blm.gov/epl-front-office/projects/nepa/42589/52582/57277/Signed_DNA.pdf

The DNA cites degraded range and an “over AML” as a reasoning to propose this action. The document does fail to include the dates of those “assessment” components.This document also does not cite any other “EA,” such as drought (or other component besides the 2010 EA for wild horses), for its “DNA.” A drought “EA” could also be used to create a “DNA.”

For a fast overview of NEPA, go to our NEPA page here: http://wildhorseeducation.org/nepa/

“Public Interest” is not discussed in the DNA. This operation is also larger than the one in the EA of 2010, opening them to litigation under the “scope and intensity” rule.

In some areas of wild horse and burro management there exists an extreme public interest and involvement with the horses or burros. At the Pine Nuts, we have that in spades.

Example of public interest: In 2013 there was a bait trapping of a segment of Pine Nut wild horses at “Deer Run.” This removal was extremely emotional for the local residents that had become attached to these bands specifically. http://wildhorseeducation.org/deer-run-pine-nut-2013/ 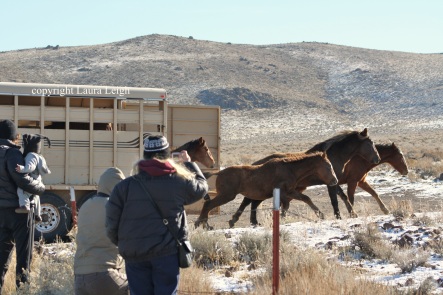 In 2010 there was a removal and a release of wild horses treated with fertility control on Thanksgiving Day that had a large turnout from locals.http://wildhorseeducation.org/roundups/roundups-2010/pine-nut-nv-2010/

Many local residents have been involved in hauling water and attempts to utilize darting as a method of keeping horses on the range in smaller segments of the Pine Nut population.

We expect as this operation moves forward to see local involvement toward adoption efforts and we hope to see government officials working with the public to minimize impacts to the existing population.

We will  keep you updated as we learn more.

Wild Horse Education is devoted to gaining protection for wild horses and burros from abuse, slaughter and extinction. Our Main Website: http:///WildHorseEducation.org