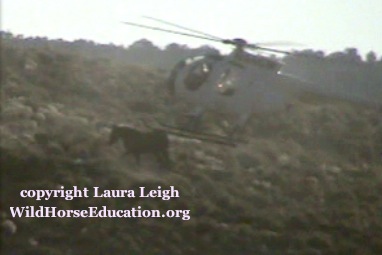 Horse hit with chopper Triple B, 2011

Wild horse and burro removals from public land are an issue of serious public concern. Often these operations, and the wild horses and burros sitting in holding facilities, become the “face” of the Bureau of Land Management (BLM) Wild Horse and Burro Program. Field work and the land use planning process, that are responsible for both removals and holding, have very little public attention.

Called roundups, or “gathers” by the Bureau of Land Management (BLM), the result is removal. But even the term used to describe the event often becomes a heated issue. That is how explosive this issue can get.

Over the last few years issues revolving around a lack of access to removals, and repeated incidents of conduct that was observed, have gained the attention of the public, media and the courts.

The operations over the last month can serve as examples of some of the most contentious issues in wild horse management at the present time. 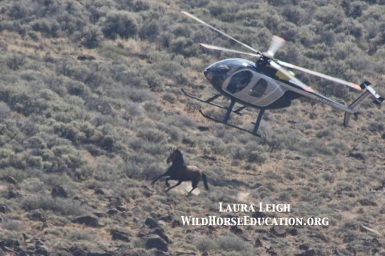 Sheldon, USFWS: The Sheldon National Wildlife Refuge near the Oregon border in Nevada, that is NOT managed by the BLM, has just completed an operation where they “zeroed out” the population of wild horses and burros. The plan began 5 years ago as the refuge finalized management documents into a “Comprehensive Conservation Plan,” or “CCP.” This plan is the equivalent of the BLM Resource Management Plan or “RMP.” Sheldon is NOT protected under the Wild Free Roaming Horses and Burros Act of 1971.

Historically brutal practices, hidden removals and horses landing in the slaughter pipeline laid an intense foundation for the last operations. Tensions were extremely high on the ground and within social media. Wild Horse Education however was the ONLY public to observe the final removal. As with all things “wild horse” the “beating of the helicopter blade” is what draws the public long after the foundation for removal is built.

Tensions with the agency, contractor and public hit a zenith. You can read about the last day of operation here: http://wildhorseeducation.org/2014/10/19/good-bye-old-man/ (action alert at the link has expired as the last of the Sheldon horses have shipped, many still to an unknown fate). You can view the last of the Sheldon Mustangs in holding here: http://wildhorseeducation.org/2014/10/30/the-last-sheldon-mustangs-holding/ 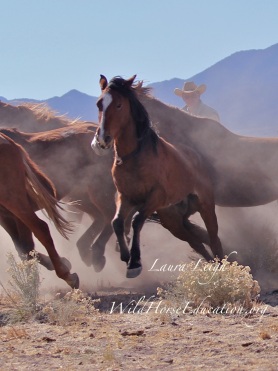 Reveille: Coming off the heels of Sheldon was the operation near Tonopah Nevada at Reveille. This operation was a BLM removal done under a court order that was incorporated into land use plans to things like the number of horses allowed on the range or what BLM called Appropriate Management Level (AML) and the boundary lines of the area the horses can legally occupy (Herd Management Area, HMA). http://wildhorseeducation.org/2014/09/01/reveille-2014/

In this area a program for management is beginning that will address many of the statements made in the National Academy of Sciences Report (NAS), prior to formal recommendations. The plan involves birth control, tracking, monitoring, data collection and multiple other facets that will give a clear picture of how the wild horses utilize the range to create a comprehensive management plan that has justification for any decisions that result in land use plans and wild horses in balance with other uses.

This operation was done with no deaths, injuries, access and a trap site adoption that has placed 10 of 15 wild horses immediately processed and offered for adoption (the 5 not immediately adopted may also have been placed) resulting in more than 13% of wild horses removed immediately going into homes and never joining the over crowded facilities that currently house nearly 50,000 wild horses (more than exist on the range at an estimated cost of $50,000 per animal over it’s lifetime if not adopted).

Yet this operation still became a flashpoint for controversy. http://wildhorseeducation.org/2014/11/04/reveille-update/

Those opposed to any changes became inflamed. In the extreme we had activists (many that have been all but vacant in the wild horse issue over the last decade on the range) began to scream about birth control (even though the advocate community pushed this concept at every meeting of the Advisory Board for the last several years and it was recommended by the NAS). On the other side there was push back on the access given to Laura Leigh, President of Wild Horse Education, by the contractor. (The types of images objected to are in this slideshow: http://wildhorseeducation.org/reveille-slideshow-day-4/)

Leigh was again the only observer during the week of operations (representing any organization or otherwise from the public). 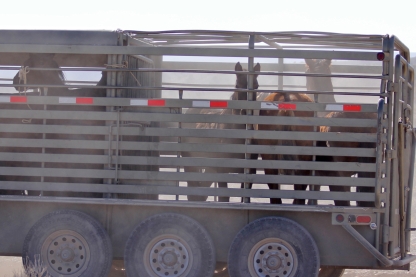 Silver King: At Silver King an operation that was intended to remove wild horses from a portion of the area where they were traveling into a subdivision (public feeding), and crossing a highway, was originally set to occur before Reveille but delays at Sheldon changed the schedule.

The first day of operation at Silver King was delayed due to “contractor issues,” just days after a confrontation at Reveille with the contractor to access. http://wildhorseeducation.org/2014/11/10/wild-horses-and-the-first-amendment-an-issue-again/

The issues to observe were supposedly worked out and the operation was scheduled to begin the following day. The “access” given allowed NO meaningful access whatsoever and observers could not tell how many horses came into the trap or even simple body condition as NO opportunity was afforded to view wild horses at all on day of capture. Wild horses that day were held at the trap location and then transferred to a semi truck and shipped 9 hours away to Palomino Valley Center north of Reno. The operation ended that day.

The public is looking for credibility. Access is essential to credibility. Wild Horse Education has been involved through the work of our founder for 5 years to establish access. This included a case that originated at Silver King that went up and down the court system for over 4 years. http://wildhorseeducation.org/2013/11/26/first-amendment-and-wild-horses-ready-for-the-ninth-circuit/

This spring the BLM agreed to access that allowed observation of every horse on the date of capture and the reopening of the Broken Arrow Facility in Fallon NV. http://wildhorseeducation.org/2014/09/30/blm-to-open-facility-after-years-in-litigation/

Conversations immediately ensued that should provide that access moving forward, and what happened at Silver King 2014, will hopefully be an “isolated incident” in part likely spurred by those that are against positive change and practices based on a “truth.” Leigh was the only observer from a wild horse organization but two women had flown in from Tennessee to see the roundup and essentially saw nothing. Hopefully they will see something today at Triple B after spending a week in NV to observe roundups and are leaving Friday.

Triple B, foals run in the desert heat were among the first to die at Triple B in 2011

Triple B: The Triple B operation north of Ely Nevada is set to begin on October 13. This operation was delayed by Sheldon and the delay at Silver King. Initially this operation was scheduled to be complete prior to Reveille.

This is another “spot removal” intended to remove 70 wild horses in an areas of “trespass” into private property. Likely a one or two day operation this time around.

The last removal at Triple B was a six week long marathon intended to remove 1,726 wild horses (1269 wild horses were removed from the range with 12 deaths occurring during the operation . A court order gained by Wild Horse Education’s founder stopped the removal after federal Judge Howard McKibben called the excuses used to justify conduct a “blame the horse affront.” This order was the first in  history against inappropriate conduct at roundups and we obtained 3 more orders including a Preliminary Injunction have been obtained since. http://wildhorseeducation.org/2014/08/30/triple-b-and-the-fight-for-humane-care/

The Triple B removal will be the last removal on the summer schedule or fiscal 2014 schedule. The fiscal year of 2015 began on October 1 and a removal schedule is expected shortly. These operations were postponed due to multiple factors. There is an assumption that these are the last operations of the year and that is not the case.

BLM began work on a welfare policy that was presented to the courts after Triple B gained the TRO as a Preliminary Injunction was fought for. Documents created for the court included the Triple B review where the conduct alleged in court was admitted to (even though it was called “appropriate”). http://wildhorseeducation.org/2011/12/11/analysis-of-blm-report-on-triple-b-conduct/

CAWP, or Comprehensive Animal Welfare Plan, will be announced shortly by the BLM and included in fiscal year 2015 contracts. Multiole court orders including the ones gained at Triple B and the most recent gained during litigation at Owyhee http://wildhorseeducation.org/2013/01/10/judge-orders-blm-to-handle-wild-horses-humanely-at-ongoing-roundup/ should be incorporated into the policy.

Leigh is not present at this operation as it was expected to be long over. Her dog had surgery and she chose to stay with him. WHE has an observer on location that will share reports later today.

There is no doubt that the opportunity for change is here. Will changes occur? Yes they will. Either positive change will begin that creates credibility through access, humane care and responsible data collection for decision making or other public land use factors will drive the program into further chaos. http://wildhorseeducation.org/2014/08/15/focus-nevada-battle/ New mining regulations and sage grouse issues have turned up the heat to an intensity never before seen. Will wild horses lose out again? With intelligent responsible engagement of process we can work toward the protections originally intended by law. Or we can watch as those opposed to recognizing a changing playing field “hold the ball” and it never makes the goal line. Time will tell…

Wild Horse Education is a registered 501(c)3 public charity devoted to gaining protection for wild horses and burros from abuse, slaughter and extinction.