Cow, it happens (land management, with a look at the Silver King capture scheduled next week) part one

This editorial is inspired by the Silver King roundup beginning next week and emails I’m getting. The target for removal is published as 980 wild horses to be removed, with an easy call to get approval to increase to over 1000 sitting in the wings. In the 606,000 acre HMA The Bureau of Livestock and Mining (Bureau of Land Management, BLM) sets a post operation population of wild horses at about 244 animals.

The BLM’s “question and answer” sheet on the operation can be a bit misleading to the novice. These sheets are often prepared for the news media, a group that is not generally land use  planning savvy.

Make it sound reasonable, throw in a grain of truth and viola! you have a position that forwards an underlying agenda or hides a deeper truth. We see this all the time with wild horses or environmental issues.

Q. Is there livestock grazing in this area? A. Yes, the Silver King HMA includes portions of eight (8) livestock grazing allotments, both cattle and sheep. Livestock grazing permittees have voluntarily reduced their use based on drought, limited forage, and wild horse numbers in excess of Appropriate Management Level (AML) and horse impacts to existing limited water sources. Livestock use complies with the grazing system outlined in the final multiple use decisions, agreements and term permit conditions that provide for periodic rest and deferment of key range sites.

Sound reasonable? BUT they do not tell you anything about what, where, how the livestock use the HMA. Nor do they tell you that massive projects are “in the works” for some of the permittees (neither do the orgs that will talk about the imbalance on the land between cow and horse without site specific detail and post a roundup picture). Those issues run deep in land management; history, politics and layers of decades of “word smithing.” This leads to deep confusion and frustration with a public that will email me “but I signed every petition! I signed comment letters on roundups!” The public is understandably frustrated and confused.

Livestock use is not determined in an EA on a wild horse roundup. A roundup EA is about the impact of a roundup operation, not how wild horses are managed, or impacted, by users of public lands. In only rare instances will WHE actually post any “sign on letter.” WHE does not do petitions. 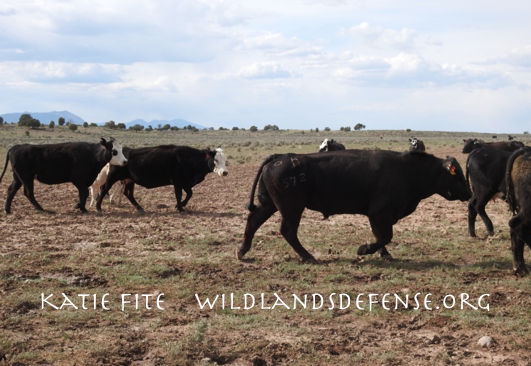 The BLM has been firing off project after project for “Wilson Creek,” allotments that are part of Silver King. (These areas are also part of the Eagle Complex, the subject of a roundup several weeks ago.) These mailings do not come in one envelope, they come as distinct projects with no cumulative look. Wild horse interests, that should be on the mailing list after making a distinct request, are not being notified. (Yes, this is the same district that failed in notification on the Gold Rock project WHE has filed a legal protest about).

These “comment periods” are critical. These periods are the only opportunity effected members of the public have to engage in land use planning (see NEPA articles). Land use planning EAs, EISs, for mines and livestock are where the vast majority of decisions are made concerning impacts to the designated Herd Management Areas (HMAs) where our wild horses are confined (about 12% of public land). The underlying Resource Management Plan (RMP) or Land Use Plan (LUP) are where comments about proportions (or population numbers) of forage are determined.

In addition, if you miss one of these “comment periods” your ability to effectively protest or litigate can be, legally, impaired. The manner in which many of these projects are being implemented, no notifications or notifications so outside a semblance of logic or normalcy, is obstruction and they are happening at a rapid rate.

Water troughs and pipelines were put in for domestic livestock. It gets a bit misleading when we hear “no water.” The natural springs that would occur in a habitat not over run for over a century by domestic livestock (cows and sheep) have become limited, trampled or nonexistent. The water troughs that you find on public lands (not the ones in fenced off tiny spots of “private property”) are often dry,  turned off, or in disrepair, leaving wildlife and wild horses with “no water.” (photo from public land trough in Wilson Creek with a resident that might not take kindly to company).

WildLands Defense (WLD) and Wild Horse Education(WHE) have filed a protest to both the way BLM is conducting their “notification” (or non-notification) process and the lack of analysis and clarity on what they are actually analyzing.

We know this can get confusing for the public and the news media. Right now it is extremely difficult to keep up with all of the projects (mining, livestock, sage grouse, fire) that are pouring out of many districts so fast it is hard to give a “close look,” let alone craft a reasonable and thorough comment, even for the most experienced advocates.

“The manner in which BLM has staggered mailing of proposed decisions/permits and split the decisions is deeply confusing.” Katie Fite of WLD writes in legal protest.

There was more than one document outlining an action in the area mailed, distinctly, as a separate action. The protest outlines more than two dozen objections to the plans for these allotments. Comments on these plans must reflect site specific information, not boilerplate comments. Crafting comments is intensive. When BLM is vague, misleading and omitting critical information crafting comments is maddening.

One of the protests begins with: We provided comments the Draft EA about severe livestock grazing degradation taking place in Wilson Creek allotment, and the ecological devastation being caused by rampant BLM pinyon-juniper destruction treatments (which also suffer high levels of grazing disturbance harm). Yet BLM has not addressed these concerns and continues much the same harmful spring period of use, very high stocking (including even increased stocking by activating “suspended use”, by swamping pastures with huge herds of cows/sheep, by increasing AUM s in burned lands and through other machinations), minimal controls on livestock use, greatly out-dated utilization levels, and a host of other grazing practices known to be ecologically harmful to public lands. I just visited portions of the allotment this spring, and was dismayed at livestock degradation and BLM treatment degradation. The permits fail to address the conditions documented in the photos and site observations across this landscape- in all allotments. Note that livestock facilities promote even worse degradation, yet the EA and proposed decisions have dozens of more harmful facilities – without ever taking into account the adverse effects and irreversible harm being caused by all the existing fences, water developments, water hauling, livestock salting and feed tubs, and other actions that severely concentrate cattle and sheep so that they destroy soils, microbiotic crusts, native vegetation (and cause weeds instead), and degrade, impair and destroy sensitive species and wildlife habitat. Many of these projects also cause increased competition with wild horses, and/or alter natural ecological processes and wild and free roaming ability. We Protest all of the BLM EA and analysis deficiencies.

In another HMA BLM allowed a tanker and truck (with a mine company logo on the door) to set a hose into a well tank. If the intention was for water to go into the holding receptacle? Anyone that has ever siphoned gas knows what happened, the troughs are dry. Whatever this is hanging out of the back of the tanker is creating a mud puddle and the wildlife and wild horses are drinking from that puddle. We notified BLM weeks ago… and have not heard a peep in reply.

On paper much of what BLM will say might sound reasonable. In reality it translates into battered and bruised landscapes with living beings that struggle to survive human stupidity, laziness and greed.

Antelope that moved off as we inspected the well and then moved back in. We watched as antelope drank from the insulation wrapped tanker dripping creating a mud hole at a well that has historic contention. BLM managers would rather placate the contention than address it (managing scared from under their desks instead of according to the oath they took).

As wild horse advocates we often simply fall into frustration. Our interest is often excluded, minimized and referenced as “crazy cat ladies that know nothing about land management.” BLM fails to take any responsibility as they continue to base the wild horse program on myth. (The NAS report of 2013 even notes at one point that they can not distinguish what was fact and what was fabricated by a manager to justify an action).

Wild horses are not the only species that suffer.

BLM’s Cave and Lake Valley destruction of sage-grouse and pygmy rabbit habitat – with the end result being all the sage died, and cheatgrass rapidly choked the understory. Ely BLM, based on a circa 2008 Lincoln CountySage-grouse EA, destroyed sage right on top of the few remaining leks in Lincoln County. It’s as if BLM wanted to eliminate the sage-grouse so they would not be an impediment to the livestock industry or development. The combination of the extreme lack of controls on grazing and the unbridled “adaptive” and “flexible” management of the proposed decisions will work in tandem with the habitat destruction projects to hasten the extirpation of sage-grouse and other sensitive species populations in Wilson Creek.

A lone stallion that keeps looking into the valley at a fenced off water source. in Silver King in June. The catchment on public land is dry…. but he will pay the price and be captured. Remember him when the helicopters fly next week.

I have spent so much time reading BLM documents and then seeing the reality of the range:

I have seen so much more. I can not begin to describe my frustrations, Some frustrations stemming from things as simple as idiotic replies to a request to fix a mailing list error.

Wild horses are the only animal in our nation defined legally by the land they stand, not what they are biologically. They are fenced in and made to stand on lands we prioritize for mining and livestock. If he steps off those lands because they are battered and bruised he is subject to immediate removal.

BLM’s constant fabrication of an assertion of equity in land management, and creation of justifications without morality, needs to end.

WHE has had multiple media outlets on range over the last few months. Seeing the big picture and not just showing up to take a few photos at a roundup, is important. We did our best to set a solid framework for the media so the stories go deeper instead of just regurgitation of a soundbite.

On Tuesday we have more ways to make your contribution go further and we will be posting updates all day on “Giving Tuesday.”

Help us build a strong frontline to fight for them and their habitat.

You can check out the “Giving Tuesday” page HERE.