NAS Report, a bit of context

This article contains multiple links that are of value to those wanting to understand the entire landscape. We urge you to read and understand. WHE is an organization that attempts to create an educated advocacy because it is truly the only hope for wild horses and burros.

Roundups bring public attention. But a roundup is a single moment in the complex act of real advocacy.

In June of 2013 the National Academy of Sciences (NAS) released a review of the Bureau of Land Management (BLM) wild horse and burro program, (you can read the report here).

There is a lot of misinterpretation, intentional or otherwise, of the findings of this report. This can be seen across the board as multiple entities and individuals take what they like from the report and discard the rest. The misinterpretation is even at the federal level from the onset of the release of the report where an initial press release from BLM National included humane care as an area that the report would assist the agency, when humane handling was not allowed to be reviewed by the NAS (you can read our response to the initial press release here) The BLM controlled the information given to the NAS and what parts of the program the NAS could review, in a twelve point parameter list (you can read here). The NAS failed the BLM across the board.

Many bands were run in temperatures well below freezing, Owyhee Complex

A simple way to explain the report is to talk about a legal action we had just prior to the NAS report at Owyhee.

The BLM created a ten year plan for the entire Owyhee Complex (5 Herd Management Areas, HMAs, in north central Nevada). The plan had serious deficits in any data to support the entire decision making process. In November of 2012 the BLM began to remove wild horses under this decision record. The conduct witnessed bordered on the obscene; routine hot shot use (even on young horses), a foal brought in over the saddle because it collapsed after being separated, horses run through barbed wire, horses brought in so hot you could not even see them through the steam coming off their bodies and observers not being given any answers to questions, but a call from the permittee to the state office about the number of horses removed off his allotment stopped removal activities so an answer could be relayed. 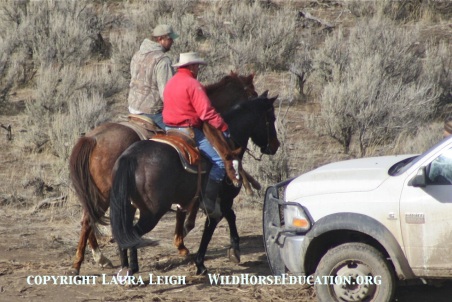 At that juncture we lost all patience with any notion of “conversation” and filed litigation. The litigation dealt with the conduct and the sheer lack of any data to support the ongoing operation.

The operation was halted immediately after we filed due to conduct issues (you can read here). Yet with all legal actions there are the emergency motions (like a TRO) and the underlying complaint. The case on underlying issues moved forward.

Sometimes it is easier for people to understand how things get twisted through specific example or by listening to a conversation between competing interests. If you click the image to the right you will go to an interview with KNPR after the court  ruled on conduct issues at Owyhee. We were notified at the last minute that Pete Goicoechea (Republican member of the NV state Senate and long time grazing permit holder in the Diamond Complex) would be the “opposition” speaker. The conversation deteriorated into a “cow v horse” typical twist and Pete using the platform to push for a removal in his area, hundreds of miles from Owyhee. A “negotiated number” is not a scientific equation. Leigh made assertions that Pete denied, but were held up by the NAS just months after this interview.

Livestock grazing in Diamond. That canyon was devastated and the damage would take decades to repair. It was not caused by horses.

In June of 2013 the NAS review was released and confirmed all of the allegations in the underlying complaint against the sheer lack of data to support the decision. The Judge allowed the complaint to be amended to include the NAS findings and we filed additional briefs as the BLM attempted to move forward and remove more horses from one of the HMAs in the complex. The BLM cancelled the removal in that HMA (you can read about how litigation moved forward here).

WHE had multiple other actions active in federal court at that time including the First Amendment case that had already won substantive rulings. The Ninth Circuit had ordered us into mediation with the BLM. We had other litigation active, and winning, against conduct issues at roundups.

At that time we began serious discussion with the agency on multiple facets of the program. We dropped litigation and began a creation of a conversation to address deficits in practice. Access is being addressed. A humane handling policy is included in roundup contracts. Mechanisms are being created to address deficits in decisions.

WHE travels to multiple states but our focus is the state of Nevada, the most arid state in the nation that contains more wild horses than all others combined. We have never been in denial that there are issues. We have been engaged in addressing the issues, from day one. We are now working with NV BLM to begin to solve many of those deficits. It is not going to be fast and easy, but it can be done. (An in depth article here: A Reality Check)

The parameters of addressing the NAS report are held in a frame of two factual constraints; the current capacity of the land (not an ideal vision) and underlying land use plans that create a frame of conflicting legal language. The challenge is to create plans that conform with conflict. We look forward to meeting that challenge, head on.

To support the work of WHE http://WildHorseEducation.org/donate