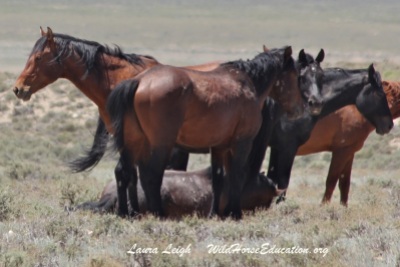 This post was created as the confusion grows. We have been writing about Fish Creek since 2012 extensively. We hope this helps clarify “how this came to be.” We requested that BLM post pictures of Sarge and the HMA. We even provided BLM with pictures. We understand they finally got something on social media yesterday. We await BLM to make an official statement. The rumor mill is in full swing and we wish people would stop perpetuating it.

Fish Creek is a Herd Management Area (HMA) that is managed by the Bureau of Land Management (BLM) in the heart of Nevada. This area became the center of a controversy akin to an old western movie beginning in the fall of last year when a plan to manage the wild horses in the area that would collect data to base further actions on an equation that addressed both the genetic stability of the herd and the resources required to protect that herd was presented. In other words, no more management based on guesswork or historic practices influenced strongly by other factors. In addition the plan would require a temporary birth control vaccine to slow population growth as the equation for justified decision making took shape.

This plan drew heat from all directions. A sure sign that this was the correct path to take.

Certain groups very new to the scene started screaming that the wild horses needed to be completely left alone and that the plan would cause “gang rape” on the range and the horses would no longer be “wild.” They asserted that “mother nature” was the only way. These groups have very little understanding that our western landscape is not “open range” but a series of fenced pasture land because of mandates to manage domestic livestock.

However the most intensive objection to the plan came from the livestock industry. 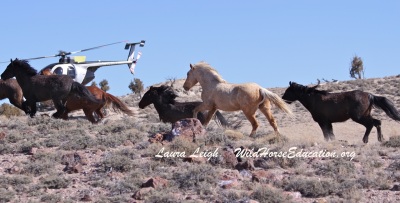 424 wild horses were captured from the Fish Creek HMA in a helicopter roundup. The original plan was to remove 200 of them and birth control treat the rest and brand for tracking of patterns of use on the range. But that is not what happened.

In a literal stand off Eureka County, along with local ranchers including trespass rancher Kevin Borba, not only filed a last minute Appeal to the Interior Board of Land Appeals but showed up onsite saying “You will not release horses today.” On the morning of the release it should be noted that the trailers to take the horses back to the range, belonging to the roundup contractor, were not onsite. http://wildhorseeducation.org/2015/02/22/standoff-obstructs-pioneering-effort-for-wild-horses/ 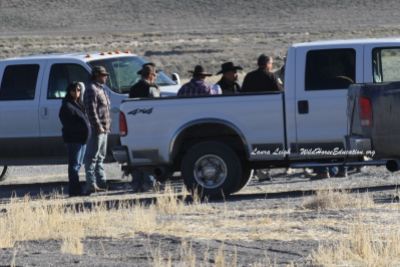 “Stand off” in Eureka. BLM contractors went over to this group to socialize multiple times

Please note that Eureka county was also the “birthplace” of the Nevada Association of Counties (NACO) legal action that was defeated in federal court (we were Intervenors). That suit asked for broad scale removals of wild horses and even their destruction. http://wildhorseeducation.org/2015/06/14/legal-briefs-briefly-and-other-stuff/ 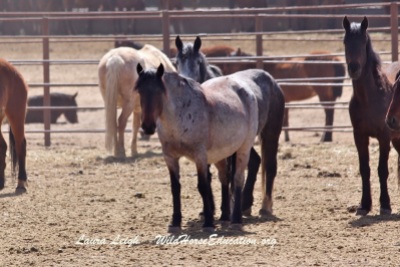 The horses were then transported to BLM holding facilities with intense consequences to the horses. 5% of them died post roundup. To read additional consequences scroll to the bottom of this post: http://wildhorseeducation.org/2015/04/28/storms-brewing-in-nevada-and-a-reality-check/

The county was not successful in the attempt to stop the release (WHE and RTF were Intervenors in the case). The trespass rancher, Kevin Borba, was removed by the court as not having standing, or a right to file.

However only 162 were returned. Mares that had given birth in the off limits facility “Broken Arrow” were not returned. http://wildhorseeducation.org/2015/03/08/broken-arrow-broken-heart/

Chad “dancing” free on the range after release

The release had further confrontation. We did not write about the confrontations Leigh was subjected to at the release and instead focused on the horses. http://wildhorseeducation.org/2015/04/14/thank-you-gallop-to-freedom/

Since the release we have been to the HMA multiple times. We have documented range conditions and tracked horses, both with the BLM and independently. This documentation includes issues of concern that were raised to the BLM about traffic patterns, both human and horse.

At this same time we are aware that the permittee (that ran livestock in trespass last year for 8 months on a “winter use only” permit) wanted to turn cows out and even notified media that he was going to do it. We understand he was denied the request because his permit is for winter use. 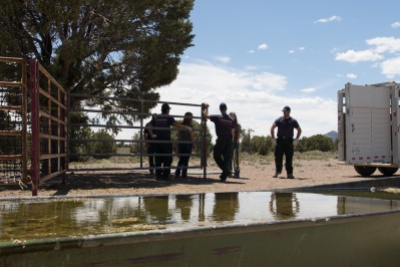 On July 29th we accompanied BLM to the range to set a few panels for potential follow up this fall on fertility control efforts to the mares that did not receive the vaccine, (please note we had been to the HMA the weeks prior to this trip and did provide information to the BLM). We set panels in the Fish Creek allotment (this HMA is also sectioned off into grazing allotments for domestic livestock) and apparently the county was protesting that the Fish Creek plan (that had been held up by the court) be stopped and that we not be allowed to set the panels.

In the Lucky C allotment the Brown Well had run dry. We got the well up and running. Water was in the troughs and we left. This is not the only water source in the allotment and horses can cross over from one allotment to the other and had been doing so (tracked by brand numbers). For the horses to move out of the Fish Creek allotment (where there was established patterns and waters) was an oddity so it was well noted. 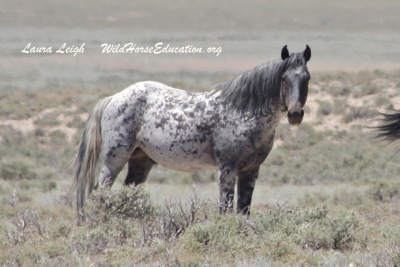 On our return a public spectacle was under way by the trespass rancher and proslaughter faction leader, Dave Duquette. On July 29th these individuals began to post online about an illegal water haul off the HMA that they were apparently engaged in, after the Brown Well was pumping (and other waters available). They were told to stop.

The area where the trespass rancher and proslaughter kingpin Dave Duquette hauled water is NOT the ranchers allotment. It is also not in the legal HMA. Underlying court documents also show his claims of “water rights” to be inaccurate.

Instead of stopping so the horses could return to the normal patterns in the HMA a public spectacle was fueled by social media. The “misinformation campaign” has run full steam. Multiple videos were posted showing multiple violations of the federal code of regulations including a wild horse being removed from public land, illegally. 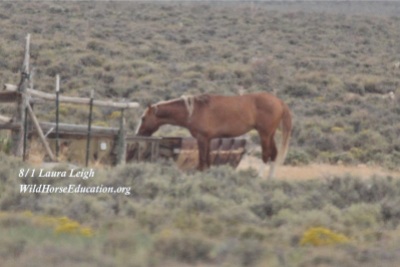 Wild horse drinking at water source inside the allotment.

Laura Leigh travelled back into the HMA on August 1 and checked the well, that was functioning appropriately while she was there. She stayed to document horses using the water source. She also retrieved the game camera chips located throughout the HMA as an “approved member of the public.” She provided the documentation to the BLM.

All of this “off HMA video taping unapproved water haul fest” activity encouraged the horses to stay in that location and become further habituated to an area that was not having enough water for the nearly 40 horses this so called “water haul” and social media “filming” activity drew (15 gallons a day per horse).

Water has been dropped in other locations by the BLM. Over 7000 gallons (during the time of this fiasco) to encourage movement back into the HMA. However habituation has occurred. 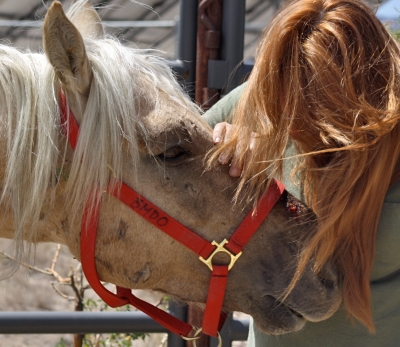 The horse named “Sarge” has now been placed in what can only be called “protective custody” at this juncture. The horse is a well known stud from the area. He is NOT the “leader” of the 40 horses in the area. He had a small band that has been destroyed since this debacle began. He is safe and current pictures of him can be found here: http://wildhorseeducation.org/2015/08/06/sarge-and-a-limited-update-on-fish-creek/

Of note: the proslaughter faction is now asking the public to contact Senators and Congressmen in NV. Senator Heller was involved in Borba’s trespass. Specifically, Borba was cited in “willful trespass” that carries a very hefty fine and Hellers involvement got the word “willful” removed. This essentially resulted in a “slap on the wrist” to Borba. After this happened Leigh did visit with Hellers office and attempted to inform them of the very dangerous situation they were going to incite. Apparently he failed to “get the message.”

At this juncture there is water on the HMA, BLM is moving to address the horses that were habituated to the off HMA water haul (with a likely removal now because of the length of the interference) and an investigation into the violations of the law. We have provided documentation and will continue to cooperate with any investigation.

We will have another update soon.

Edited to add pictures of some of the current water in the Lucky C allotment. The generator at the well is filled regularly and the yellow tub is at the appropriate level and refills from a storage tank. Please note there are also catchments and it has rained. All photos that WHE takes have meta data embedded. So do game camera photos and BLM photos (below). 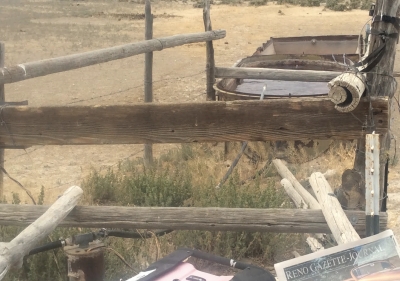 Keep us in the fight. http://WildHorseEducation.org/donate