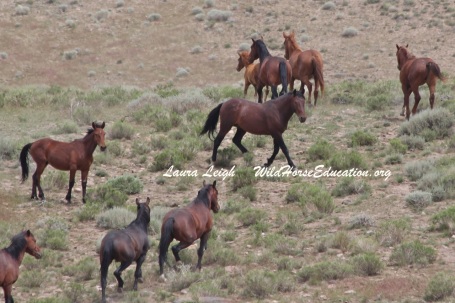 Wild Horse Education has been busy monitoring multiple areas as we endure a fourth year of drought in the west. Due to time and resource constraints we are behind on publishing reports. Currently we need funds for vehicle repairs and equipment needs including additional game cameras. If you can assist please visit our donate page at http://WildHorseEducation.org/donate

There had been reports surfacing that wild horses were congregating in an area of the HMA and damaging water resources.

Brief synopsis: Forage and water was found throughout the HMA. Some areas of historic use were showing little to no sign of wild horses. Forage is available in almost all areas including multiple healthy species of native grasses.

Wild horses observed in good body condition. Only one area had concentrated use, observed. That specific area had large turnouts of sheep on either side, sheepdogs (note these dogs chase everything). This area also had significant forage available and water. The concentration is likely due to domestic livestock and multiple exclosure fences.

Since the passage of the 1971 Wild Free Roaming Horses and Burros Act there has ben one roundup in this HMA in 2008. Underlying documentation notes some disturbing history in this HMA (and those associated).

WHE has been documenting the area and associated HMAs. We have documented a “graveyard” and will follow up. The info below is from decision documents for the 2008 removal.

“Both HMAs could have been influenced by illegal human activity. Anonymous reports have been received in past years of airplanes herding wild horses in the Bald Mountain and South Shoshone HMAs. It is possible that wild horses are being shot or killed by other human means, although carcasses have not been discovered. Over the years, field staff has located old skeletal remains of which cause of death was undeterminable. The Bald Mountain and South Shoshone HMAs are the only HMAs in the Shoshone-Eureka Planning area that exhibit a low or negative growth rate that cannot be explained by gather activities, fertility control or inherent movement patterns.”

“In 1980, dead wild horses were found in the Bald Mountain HMA and other nearby HMAs, which were determined to have been shot. In November 1980, 20 were located in Ox Corral Canyon, and in December, an additional 13 dead wild horses were located in the Bald Mountain HMA north of Corral Canyon. Between 1987-1989 over 500 wild horse carcasses were documented in Lander County. Investigators and veterinarians determined that the majority of animals had died from gun shot wounds. No less than 266 carcasses were discovered in Bald Mountain HMA, and 7 in South Shoshone HMA. Other HMAs involved included Augusta, Callaghan, and New Pass/Ravenswood.”

“Though several individuals were indicted for wild horse deaths in Lander and other Nevada counties, the cases were eventually dismissed due to insufficient evidence. Nonetheless, a significant number of wild horses were killed, which influenced the population sizes during that time. Today, groupings of wild horse skeletal remains are still discovered in both South Shoshone and Bald Mountain HMAs. As recently as winter 2000, 12 wild horse skeletons were located in close proximity of one another north of Corral Canyon in the Bald Mountain HMA. The grouping of the skeletons of apparently younger animals caused reason for suspicion; however, the carcasses were too decomposed to determine the cause of death. There have also been at least two anonymous reports received between 1990-1999 of small fixed wing aircraft pushing or herding wild horses. In one case, gunshots were heard, but follow-up investigation produced no findings of illegal activity.”

We are researching issues in the area and will continue to monitor.